Today's release of Maryam Al Khawaja after nearly three weeks in jail is welcome. But it's tempered by news that the government has maintained the charge against her and imposed a travel ban that prevents from her from leaving the country. 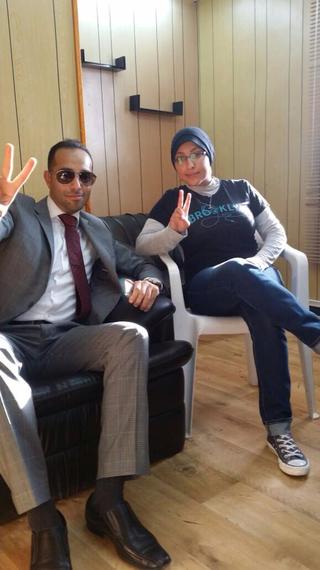 Al Khawaja was arrested as she arrived in Bahrain on August 30 in hopes of visiting her father, celebrated activist Abdulhadi Al Khawaja, who is on a prison hunger strike as he serves a life sentence for his peaceful part in the 2011 protests. She was immediately detained on the charge of assaulting police officers at the airport, which she denies. She's due in court on October 1 and if convicted could be sentenced to several years in prison.

According to a statement from the Bahrain Ministry of the Interior: "In accordance with an order from the high criminal court, Mariam Abdulhadi Al Khawaja was released dependent on a guarantee of her place of residence and a travel ban was imposed on her."

That means she can go home to her family but can't leave Bahrain. We've seen from previous cases involving activists prosecuted on bogus charges that it's difficult to predict how long the courts will take to resolve a case. It's common for cases to be regularly adjourned month after month. The 23 medics who were detained and tortured for treating injured protestors weren't given final sentences -- following an exhausting trial and appeals process -- until two years after their arrest in 2011.

If she continues to speak out against human rights violations in Bahrain, she risks further punishment; insulting the king on social media, for example, carries a sentence of up to seven years in prison. On her release she immediately said "I will continue doing what I'm doing for human rights."

Maryam's arrest generated more media focus on Bahrain's human rights record than we've seen for many months, and the international outcry that followed her detention presumably helped secure her release. But to get the charges dropped, more will need to be done. Some members of the U.S. Congress have been outspoken. Senator Tim Kaine (D-VA) raised Maryam's case at Congressional hearings last week and Co-Chairs of the Tom Lantos Human Rights Commission Congressmen Frank Wolf (R-VA) and James McGovern (D-MA) called for her release.

But while the U.S. State Department said it was "watching closely," it didn't publicly call for her to be freed, and took its usual muted line when it comes to publicly criticizing the Bahrain regime's human rights record. The issue of wrongly imprisoned people goes well beyond Maryam. There are thousands of prisoners in Bahrain convicted for their perceived part in anti-government activities, and the country's unrest won't stop until its political prisoners are released.

Bahrain is due to have parliamentary elections in the coming months, but with the opposition saying it will boycott an unfair process and the continued jailing and harassment of activists like Al Khawaja, it is difficult to see how Bahrain will find a path out of its political crisis.