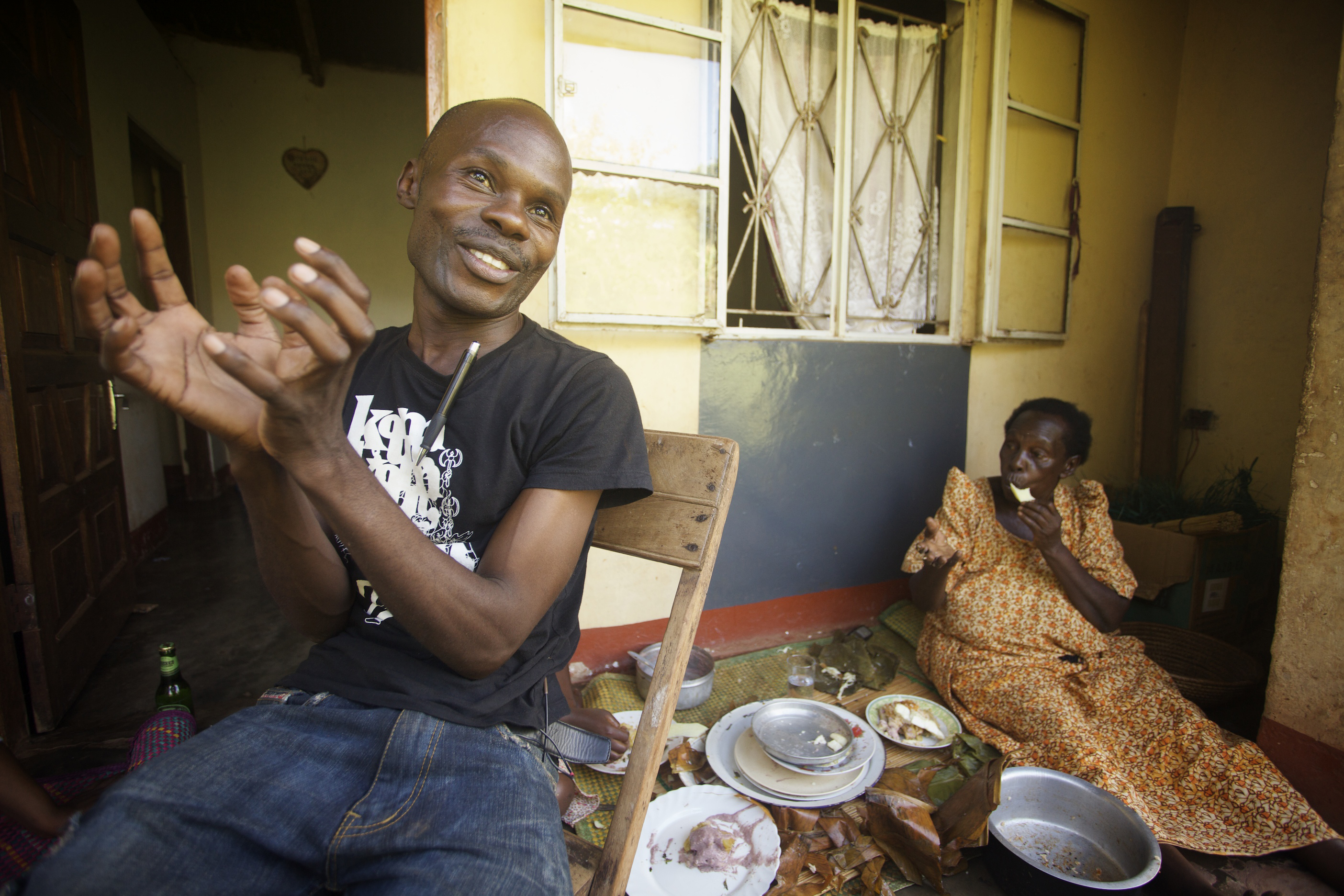 LGBT activist, David Kato and his mother, featured in Call Me Kuchu, opening in select theaters this June.

The culture war in Uganda over LGBT rights is a double-binded problem: a struggle over the hegemony of fundamentalism and a fog behind which a power grab for the nation's oil reserves and natural wealth can take place.

Only a country that could create a despot as insane as Idi Amin could entertain a law as genocidal as outlawing gays.

This is the voice in my head that is embarrassed and horrified by Uganda's past and present state of affairs.

As the child of a parent who left that country, it was inevitable perhaps that I'd have a foot in both worlds -- that I would in the very least have a connection to this place.

Visiting as a teenager, I was at the Botanical Gardens and needed to find the ladies room. There was a huge iridescent blue spider hanging in the air before me, in a web big enough to catch a bird. The toilet is like a goalpost on the other side. Needless to say I walked backwards slowly, like she was one of those monsters from "Alien."

Uganda by some appearances is a place so backwards and primal at times, I try to forget it and yet there she is calling me again.

This time in the form of film called "Call Me Kuchu," a documentary by Malika Zouhall-Worrall and Katherine Fairfax Wright, opening this month, which tells the story of the present-day persecution of LGBT people, or "kuchus," in Uganda.

History lesson in a few lines: Uganda was colonized by the British and between them and the Christian missionaries they divided and conquered the land and its people. The people (self-organized under a handful of ancient kingdoms already) rebelled in their own way, but not unmarked by the experience after independence, yoked themselves to some questionable leaders, Amin the worst among them.

And as with any trauma, there are deep wounds.

After so many years of suffering, I want to feel good again. If Uganda could have a voice, maybe she's saying that.

That effort to feel good again has many turning to religion. If you'd like to read-up on this, I wrote about the surge in evangelical Churches and cults in Uganda for ABC News 12 years ago here.

At the same time, there is the fact that oil was discovered in Uganda, and now also gold: Clearly, it would benefit those making debate-worthy deals in the oil trade and about the nation's other precious natural resources to have the country distracted over something as futile as resolving whether or not to outlaw homosexuals.

What a way to take up all the political air -- ferreting out all the "gays" is a perfect distraction from more imminent issues of how (or if) one should exploit the nations precious resources.

In this political shell game, the case of Uganda is yet another example of people being pitted against each other to distract them from the larger issues at hand.

Why does any of this matter?

I'm writing this from the United States, and as western nations consume the lion's share of the world's resources, this pillaging is often done in our name.

Even as a youngster, I could see how the rich soil in Uganda had been stripped in many places of its topsoil to reveal blood red clay.

Any farmer will tell you lost topsoil can't be good. When it rains, all that good earth runs off, down streets and there are many unpaved roads in Uganda.

And now of course we know trees are the lungs of the earth, so how do you think the deforestation in Uganda and elsewhere is going to impact the wider world?

What would it be like to live there everyday and see this and know this on some level, but not have the resources, freedom or education to be able to say it? Or to feel it?

If you are not free, you can only speak in codes. And then, the codes become like a prison. And you forget what the poetry of words and symbols was pointing back to. And you get lost. The Bible, for example, is a kind of code. But read with the wrong mind and heart, you can miss the meaning.

Is this an unsolvable problem?

At some point Ugandans need to understand that if they call themselves people of faith -- be it Christian, Muslim, Bahá'í or whatever -- that religion is only of use if it teaches you to serve others in compassion. Religion has value inasmuch as it teaches you not to judge.

Some people who call themselves Christians are leading the charge to eliminate LGBT people in Uganda and are using a very limited interpretation of the Bible (the destruction of Sodom and Gomorrah, for example) to justify their persecution of the community. Unfortunately, they do not yet grasp the New Testament, in which Jesus not only welcomes all people but actively seeks to embrace those of a perceived lower social status -- lepers, prostitutes, foreigners, the dead, the insane. Everyone is welcomed into His embrace.

This wasn't any easy lesson, even the disciples often had trouble understanding why Jesus would associate with people they viewed as troublemakers and outcastes. But what Jesus was trying to communicate was -- come as you are. He didn't say, change and then I'll love you. His symbolic act of washing people's feet was a way of eschewing status and the social conditioning we receive that we are better than ______ . His example was to show deep humility and care for everyone.

It is such a kind message and it is the kernel of every faith in its simplest form.

And yet when bad things happen -- being terrorized in your own country, the loss of parents from a frightening disease, general uncertainty about the future, free-floating fear, the basic difficulties of life, a sense of lack when others are seen as having more, human neuroses -- all of these things and more can infect people's minds and hearts and lead them down the wrong path. It's not difficult to see how people could begin to think that G-d would be pleased if they could just get rid of uncertainty, if they could just control things, if they could just make things as they would want them to be. If they could just...

We begin to actually see.

I see the spider but I will not disturb her home.

I see the earth, how her skin's been ripped open.

Ugandans know there is something wrong. But they can't put their finger on it. They think it's the LGBT, they think it's...

But what they foist on LGBT people is simply a mirror of their own wickedness.

Uganda: You have to remember who you are.

The world needs you to.

My father says the old way of seeing is that a human being is good.

You want to feel good again?

You need to remember.

(Remember how to see the world in a way that is bigger than "resources" and what you can use or take. Why treat the land and water as if it were a slave? What for example, if Uganda were your mother? Or, if the land and water were in fact you -- yourself?)

And, you have to change.

(The old tribal divisions, or a new nation, unified as one -- both constructs are useless if there is no sense of community and desire for a common good for all.)

You want to feel good again?

See that G-d made everyone and everyone is ok.

Trust that you can be an agent of healing.

Plant a tree. Seriously. It's something Nobel Peace Prize Laureate, Wangari Maathai, had encouraged for many years in East Africa.

Laugh the next time someone says the sky is falling because of another person.

Even the colonials and the elected officials who are stealing from you -- you are letting them.

You exist, and this is a miracle -- as beautiful as that blue spider and that red clay who holds so many secrets.

The sun is shining.

The land is a reflection of your values.

She is healing as you learn.

You have a choice.

You can be real custodians of the Word.