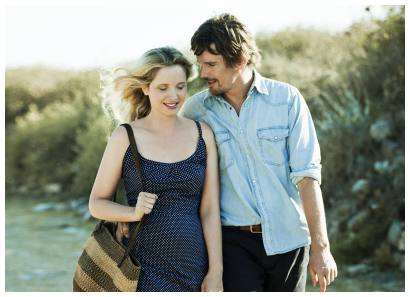 This, you see, is the eternal question for me: Am I a romantic or not? As a film journalist, I need to serve many masters -- drama, documentary, comedy, horror, etc. -- and since I tend to favor independent releases, 'cause that's where the truly exciting, innovative stuff is going on, I suppose my narrative standards should be more highly evolved. They are, to an extent -- I can come out of a film like The Sweet Hereafter or Amour feeling devastated but still exhilarated, thrilled at having been taken by the filmmaker into the darker reaches of human existence.

And yet... I like happy endings. I have no problem tearing up when a protagonist ends up with his/her One True Love. As much as I know how hard a thing that is to attain in reality, much as in the back of my mind I wonder how long that happy embrace will last past the fade-out, I want to believe such things are possible and, despite evidence to the contrary, sustainable.

"What the world really loves is not a lover, but a love story." says the narrator at the beginning of a sponsored video I was asked to post on my website (you can see it here). But is that so? Any love story? I ask this because I've seen Before Midnight, the third installment in the Ethan Hawke/Julie Delpy/Richard Linklater romantic series that's supposed to hit the sweet spot as far as bringing good, old-fashion romance to the indie sector, but that just makes me more confused about what I seek from the genre.

True confession time: I tried to watch the first film, Before Sunrise, and had to give up about a half hour in. Something about the interplay between the two characters -- who meet by happenstance on a train and spend a romantic night together in a fantasy Vienna -- just felt too staged for me to go with the conceit. I didn't even try with the follow-up film, Before Sunset, in which the lovers reunite nine years later, after Ethan Hawke's character has written a book about their previous tryst.

Another nine-year gap brings us to Before Midnight, and what I at first feared was just another continuation of a scenario completely divorced from reality. Ethan Hawke's Jesse and Julie Delpy's Celine are now in a long-term relationship that has produced two unearthly beautiful, twin daughters. They're wrapping up a vacation in Greece as Jesse says goodbye to the wiser-than-wise son he had with his former wife, packing the kid off to America before the two and their daughters visit some friends for a pleasant little brunch/lunch/supper in which the gathered couples extol the virtues of their relationships. So far, so much romance seen through a set of too-rosy glasses.

But this is not really so. Look closer, and it becomes obvious throughout that cracks are showing in Jesse and Celine's relationship; there are frictions there that are maybe not being sufficiently addressed. When the couple gets the opportunity to ditch their daughters and spend an anticipated night of romance in a hotel, the rifts blow and passion is supplanted by a surprisingly ferocious airing of long-standing grievances.

And that's where I start to get into the film. Because, yes, what I love is a love story, and the nature of a story is to throw obstacles, conflict, difficulties into the path of its protagonists. That's when I learn something about human nature, that's when I derive some satisfaction. I don't suppose it's too great a plot spoiler to note that Before Midnight's lovers will survive the turmoil of their night, but at the very least, for me, they feel realer coming out of that conflict than they did going in. I'm a romantic, but I need some connection to reality before I can even begin to entertain the fantasy. After a delay, Before Midnight gives me that.

Maybe I need to go back to those two previous films and see if there are depths there I previously missed.

Let me open this up to the floor: What do you seek in a romantic film? Is pure sentiment enough, or do you need more depth and complexity? What titles stand as the perfect examples of the genre; which ones are the pits?