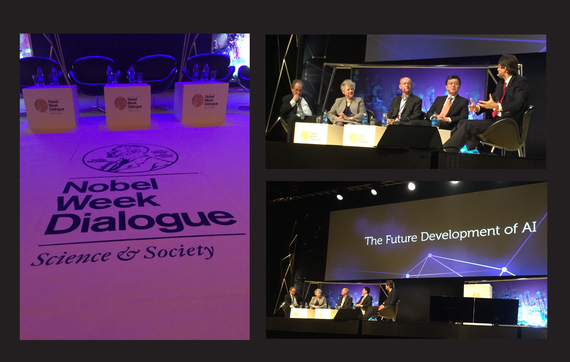 Each year, the Nobel Prize brings together some of the brightest minds to celebrate accomplishments and people that have changed life on Earth for the better. Through a suite of events ranging from lectures and panel discussions to art exhibits, concerts and glamorous banquets, the Nobel Prize doesn't just celebrate accomplishments, but also celebrates work in progress: open questions and new, tantalizing opportunities for research and innovation.

This year, the topic of the Nobel Week Dialogue was "The Future of Intelligence". The conference gathered some of the leading researchers and innovators in Artificial Intelligence and generated discussions on topics such as these: What is intelligence? Is the digital age changing us? Should we fear or welcome the Singularity? How will AI change the World?

Although both challenges in developing AI and concerns about human-computer interaction were expressed, let's in the celebratory spirit of the Nobel Prize focus on the future possibilities of AI that were deemed most exciting and worth celebrating by some of the leaders in the field. Michael Levitt, the 2013 Nobel Laureate in Chemistry, expressed excitement regarding the potential of AI to simulate and model very complex phenomena. His work on developing multiscale models for complex chemical systems, for which he received the Nobel Prize, stands as testimony to the great power of modeling, more of which could be unleashed through further development of AI.

Harry Shum, the executive Vice President of Microsoft's Technology and Research group, was excited about the creation of a machine alter-ego, with which humans could comfortably share data and preferences, and which would intelligently use this to help us accomplish our goals and improve our lives. His vision was that of a symbiotic relationship between human and artificial intelligence where information could be fully, fluidly and seamlessly shared between the "natural" ego and the "artificial" alter ego resulting in intelligence enhancement.

Barbara Grosz, professor at Harvard University, felt that a very exciting role for AI would be that of providing advice and expertise, and through it enhance people's abilities in governance. Also, by applying artificial intelligence to information sharing, team-making could be perfected and enhanced. A concrete example would be that of creating efficient medical teams by moving past a schizophrenic healthcare system where experts often do not receive relevant information from each other. AI could instead serve as a bridge, as a curator of information by (intelligently) deciding what information to share with whom and when for the maximum benefit of the patient.

Stuart Russell, professor at UC Berkeley, highlighted AIs potential to collect and synthesize information and expressed excitement about ingenious applications of this potential. His vision was that of building "consensus systems" - systems that would collect and synthesize information and create consensus on what is known, unknown, certain and uncertain in a specific field. This, he thought, could be applied not just to the functioning of nature and life in the biological sense, but also to history. Having a "consensus history", a history that we would all agree upon, could help humanity learn from its mistakes and maybe even build a more-goal directed view of our future.

As regards the future of AI, there is much to celebrate and be excited about, but much work remains to be done to ensure that, in the words of Alfred Nobel, AI will "confer the greatest benefit to mankind".