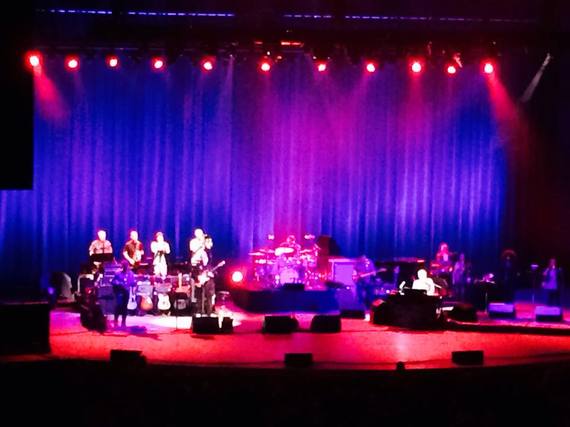 It was just last weekend that I spent a wonderful evening under a beautiful night sky enjoying listening to Elvis Costello. I was so excited to see him live in concert at one of my favorite outdoor venues in New Jersey. Since the concert, his 1974 hit song, "What's so funny about peace, love, and understanding" has been playing repeatedly in my head. Ironically, rocker Nick Lowe wrote the proficient songwriter's most popular song and biggest crowd-pleaser. This idealistic tune laments of a wicked world of darkness and insanity. Elvis, in his distinctive voice sang this song with an upbeat tempo reminiscent of the late 70s new wave genre. With angst and attitude in his voice, he sang out loudly, "(What's so funny 'bout) Peace, Love, and Understanding?" After watching the recent Republican Presidential debates, I can't help but ask the same question in reference to political correctness.

As someone born Jewish and one who doesn't celebrate Christmas, I have never been offended when greeted with a friendly, "Merry Christmas." I've always taken the wish as I presume it is intended, as a pleasant and well-meaning gesture. I know some who share my faith feel differently. Personally, I look at one's intention rather than the specific words they use. However, it can be challenging to derive one's intentions. Therefore, how do we know if someone's words are meant to be hurtful or exclusionary or are simply a poor choice of words or simple ignorance with no ill intent? Well, I guess we can never know for sure but if we listen carefully, and if we are honest with ourselves, I think we can tell if someone is deliberately being mean-spirited or if what they are saying is tapping into our own feelings of insecurity and feeling different.

A few years ago, I had to get my car fixed at a body shop. A neighbor, a native of Africa, and whose son accidentally bumped my car, paid for the repairs. I remember the owner of the body shop handed me my keys, and told me that the "colored fella" had dropped off the check. I was taken aback by the man's use of the antiquated term. However, it did seem to me that the man was not using the expression in a derogatory fashion. The sounds of the words coming out of his mouth sounded dissonant to me. Now I have no way of knowing if the man is racist or if he had simply grown up at a time and in a place, where the term was commonplace and acceptable. I also don't know if my neighbor would have been insulted by the term. I would imagine that reactions to the term might vary from one person to the next based on their experiences and perspective. Regardless, I think there is always room on both sides of the argument for sensitivity to each other's viewpoint. My fear is that individuals will use the argument of a society where political correctness has gone awry as an excuse for insensitive and derogatory remarks. Many times those who are the most critical of political correctness are the ones who are rarely a target. Regardless, what's wrong if we err on the side of trying not to offend or upset others? There are certainly worse aspirations we could have.

Maybe though, the words 'political' and 'correctness' are poor word choices for the term. In our current politically divisive environment, anything with the word 'political' in it already has a bad connotation; and it really isn't about what is the correct or incorrect thing to say. It's more about consideration and understanding for others. Perhaps the so-called progressives and idealists aren't really seeking political correctness. So how about we forget about being politically correct and we focus instead on other more agreeable goals such as peace, love, and understanding. After all, as Elvis puts it, "What's so funny 'bout peace, love, and understanding?"