America's 21st century urban parks have the ability to be transformational; and when a design embraces the unique qualities of a given site, it can deepen the public's understanding and value of our shared landscape heritage, something we've already seen with visionary works like New York's High Line. This is an exciting time for landscape architects, urban planners, building architects, municipal officials and other professionals involved with urban parks - they're being challenged and inspired to be more innovative, think more holistically and delve more deeply, for example, into the interplay between natural and cultural systems. But, this is more than just which cities will create their own High Lines, this is about being inspirational, entrepreneurial, resourceful, site-sensitive and visionary. 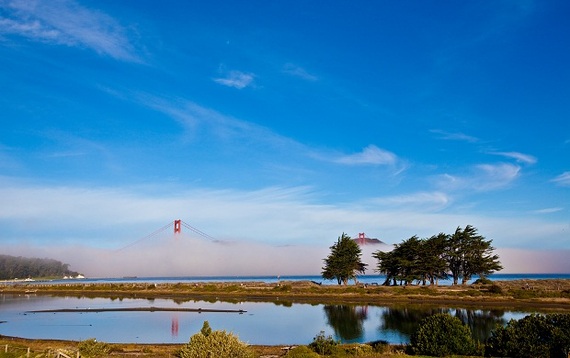 That's why the current, rather frothy debate about proposed development at Crissy Field in the Presidio at San Francisco's Golden Gate National Recreation Area, which arguably ranks in significance with New York's Central Park and Washington, DC's National Mall, deserves more national attention. This land holding, established in 1972, is one of the nation's largest urban parks, greets more than 16 million people annually, and is overseen by an exemplary public-private partnership of the National Park Service (NPS), the Golden Gate National Parks Conservancy ("the Conservancy") and the Presidio Trust ("the Trust"). Representative Nancy Pelosi calls it "one of our nation's great natural treasures." And, as I've written previously, it's the locus of several recently completed, stellar examples of inspired, site-sensitive projects. 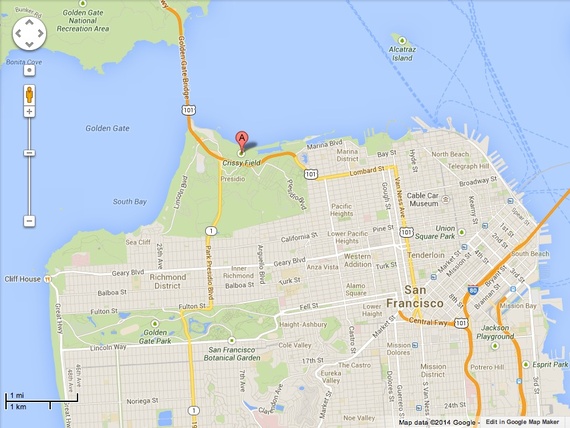 The Presidio, a park and former military base on the city's northern tip, was established in 1776. It was among the many facilities decommissioned during the US Military's 1989 Base Realignment and Closure and gained national media attention following plans to auction off the site. 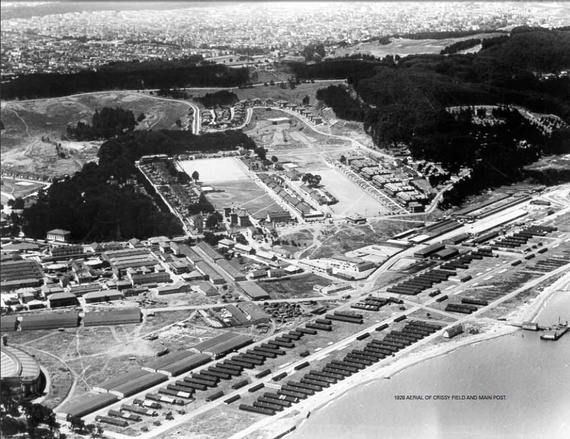 1928 Aerial of Crissy Field and the Main Post. Photograph courtesy the Presidio Trust.

A strong grassroots movement defeated that attempt and in 1996 an Act of Congress championed by Rep. Pelosi placed it under the management of the Presidio Trust. Among other mandates, the Trust was required to become financially self-sufficient by 2013, which it did.

The fate of part of Crissy Field, an area with panoramic views of the Bay and the Golden Gate Bridge that the San Francisco Chronicle's architecture critic John King says is "the most popular destination in the Army post-turned-national park," rests with the Presidio Trust. The decisions about Crissy come during an era of ever-increasing cultural diversity and a society that is overwhelmingly more technology driven, resulting in critical challenges for stewards to forge meaningful connections between people and place. In a recent conversation Greg Moore, the Conservancy's president and CEO, told me "if we are not maintaining an emotional connection we can lose the support we need to fulfill our role as stewards."

A design competition lasting more than two years has yielded three finalists, each with a distinct proposal for overhauling the former Commissary site at Mid-Crissy Field, an eight-acre area that currently includes a parking lot and a retail sports outlet.

One team, WRNS Studio and Chora, has proposed a cultural institution called The Bridge, where they say "community will mesh with stewardship, fun with intellect, adventure with commitment, and past with future." 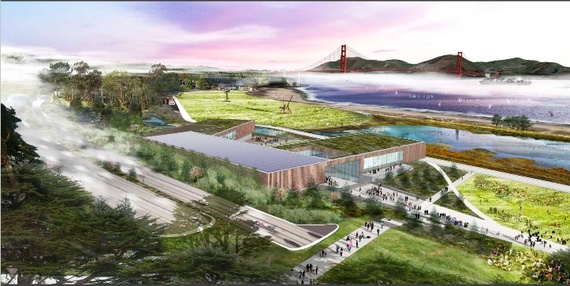 Rendering of The Bridge, courtesy the Presidio Trust.

Their concept, they say, is distinguished thusly: an "Intellectual framework aligned completely with the Trust's mission + vision"; a "Program that will catalyze the Trust's vision for the Main Post Bluff"; and a "Concept worthy of this site."

The Conservancy has put forth the Presidio Exchange or PX, a home for "a dynamic mix of public programs that are Presidio-themed, participatory, and cross-disciplinary." 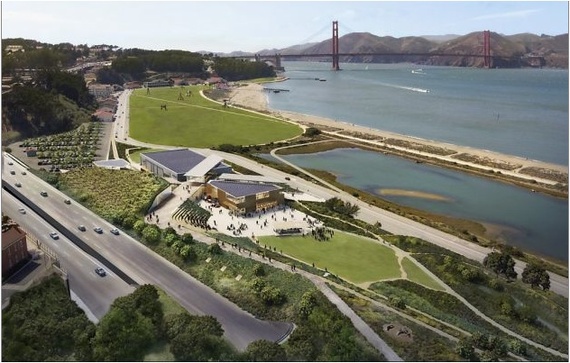 Rendering of the PX, courtesy the Presidio Trust.

According to the proposal: "The majority of PX programs will be free and accessible to all, and content will be ever-changing, co-created, and audience-driven."

The last is the Lucas Cultural Arts Museum, an institution based on filmmaker George Lucas' art collection, which "showcases art through the lens of innovation and storytelling ... from the Golden Age of Illustration to landmark achievements in filmmaking and cinematic design, to groundbreaking digital work." 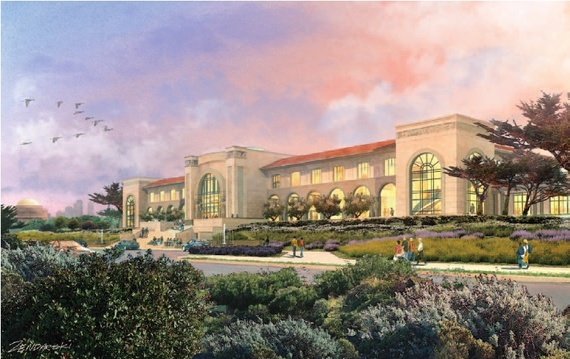 The proposal also states: "This civic amenity will enhance and compliment (sic) the recreational uses that already exist on Crissy Field and in the Presidio and create a rich cultural and educational center for the community and visitors to the park to experience."

The stakes are high. A November 24, 2013 San Francisco Examiner editorial stated: "[T]he development space may be one of the most iconic in the world." Brent Glass, a historian, former director of the Smithsonian National Museum of American History and a consultant to the Presidio Trust, recently opened a June 2013 public meeting by saying the winning project "will in many ways define the identity of the Presidio in the 21st century."

So, in looking at the proposals, how is success measured? Do any of the three embrace this cultural landscape's rich and unrivaled historic and physical context? The Trust requires that each proposal address six, equally weighted and rather broadly defined criteria including programmatic issues, compatibility with the site's natural and cultural setting, and the need to be economically viable. 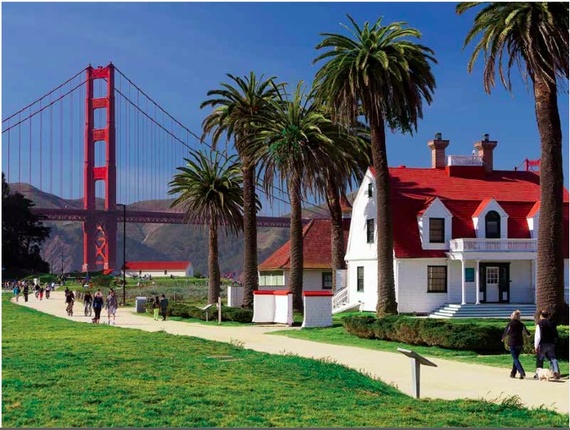 WRNS Studio's Jeff Warner discussed with me the significance and appropriateness of the Mid-Crissy location, saying with some gravity, "There are no more sites like this." In formulating their proposal, it became clear they would "make sustainability the idea that this site deserves." One of the more intriguing issues he raised was "the witnessing of the planet that you can do from the site - weather for example," and added, "the building and the program [are] reflective of that site - place is everything."

The Conservancy has successfully implemented numerous projects, including the transformation of Crissy from old barracks, and would seem to have the inside track. The Conservancy's Moore told me an important factor in shaping their proposal is the idea of "emotional stewardship: How do people find meaning and enjoyment? How do we connect people, both local families and kids and those from afar? The meanings of these places and what they bring to our lives, this is where programming is critical."

By far the most talked about proposal is the Lucas Museum, a self-financed, 95,000-square-foot, $300 million complex with a proposed maintenance budget, outlined in a 289-page document with letters of support (pp. 233-287) from politicos Governor Jerry Brown, Mayor Edwin Lee and Rep. Pelosi, filmmakers Martin Scorsese and Ron Howard, and many others.

My first reaction to all three: How many tens of thousands of square feet of new construction is appropriate here? Is a collection-centric approach necessary? How many people will utilize these facilities? How much of what happens inside the box relates to what's outside? How porous should the box be? Are there other, more efficient, effective and physically less-invasive ways to engage the target audiences?

Is this the best we can do?

While critical response has varied, the Lucas proposal has been deemed inappropriate by the National Park Service and the Chronicle's King. A better place for the Lucas collection, King suggests, is the Palace of Fine Arts. When I asked Lucas Museum spokesperson David Perry about the suitability of Mid-Crissy Field, he said: "The design and the collection is of the place. It is the only proposal with a complete collection. The others have no collection to speak of ... [This] is a gift of philanthropy unparalleled in contemporary arts giving."

And, he added, "We just hope that the Presidio Trust says thank you."

There are calls for the Trust to put off any decision for the next several years. The Evelyn & Walter Haas Jr. Fund, which donated $30 million to Presidio restoration efforts, wrote the Trust decision makers in a well articulated and thoughtful letter on October 29, 2013: "We ask that you select none of the proposals at this time," (emphasis original) and pointedly said, "Rather than fulfilling the vision of a single individual, any new development in this important corridor should be community-inclusive"; last November the San Francisco Examiner editorialized: "Presidio Trust is right to take time for Crissy Field project decision"; a January 2014 Chronicle editorial titled, "Don't rush Presidio plan for museum," echoed that sentiment; and the National Park Service General Superintendent Frank Dean's December 12, 2013 letter to the Trust says, "The proper stewardship of the Presidio merits taking a long view."

That raises the question: What is the long view? Is it time to revisit the Presidio's vision statement, which was articulated before the Trust became self-sufficient, a strategically important milestone? 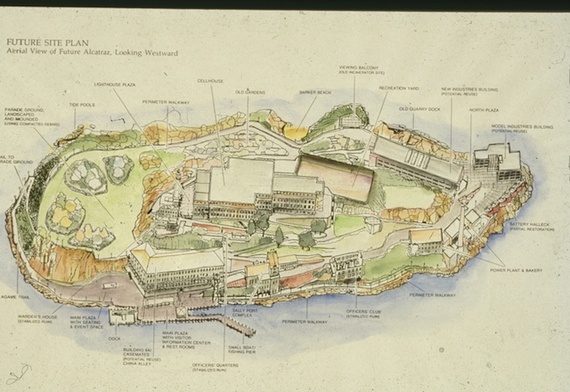 The great landscape architect Lawrence Halprin, in Alcatraz The Future: Concept Plan & Guidelines for Alcatraz Island (1988), offered some prescient counsel: "New information programs are now being introduced on the island; they will continue to increase as more of Alcatraz becomes accessible. The programs should be well-tuned to the information they are attempting to convey and to specific qualities of the specific locations in which they are delivered."

So, are we ready to name a winner? Pressure is mounting for a decision in early 2014 with Rep. Pelosi insistent that a decision be made now: "They've had enough time to think things through," Pelosi recently said of the Presidio Trust to the Chronicle's editorial board, adding, "Let's just get it done." Rep. Pelosi also said filmmaker George Lucas should be celebrated, not criticized. And, in discussing the disputed appropriateness of the Lucas museum, Rep. Pelosi offered this: "If they had a plant in the Presidio or a fish in the Presidio they say it's indigenous, let's preserve it ... This (Bay Area) is the place that created 'Star Wars.' That's indigenous too."

The frustration of those who want a decision now is understandable. But, as the Conservancy's Moore says, "We are at a point in time we should never take for granted." I agree and, therefore, I think this decision requires more thought and consideration. To demand both a conclusion and pre-determine a winner appears to upend the decision making process and the Bay Area's legacy of strong grassroots involvement, one in which personal connection is reflected in "emotional stewardship" - it's an indispensible asset in the future of a nationally significant park that serves a local and global audience.