The Iraqi army has finally arrived at the gates of Fallujah, a city 70 km west of Baghdad that fell to ISIS more than two years ago and was the first in a series of losses that left one-third of the country under the group's control.

Since ISIS took over Fallujah in 2014, the vast majority of the population has fled. Hundreds of thousands of civilians managed to find ways out despite ISIS restrictions on movement, and they have revealed to the world the horrors they left behind.

Despite this, however, around 50,000 Iraqi civilians are estimated to be stuck in the city, alongside approximately 1,000 ISIS fighters in control. Refugees fleeing Fallujah have reported that civilians stuck there are starving to death as ISIS hostages, their bodies deployed as human shields to blunt the force of the Iraqi Army assault.

This is extremely troubling news, not only because of the obviously inhumane conditions imposed upon the innocent by the Islamic State group, but also because the Iraqi Army and its allies have a poor record at protecting civilians in areas they are trying to liberate.

A failure to account for innocent life in almost-entirely Sunni Fallujah could reinforce the sense of alienation and discontent among Iraqi Sunnis across the country, and make the battle to defeat ISIS and build a united Iraq harder than ever. 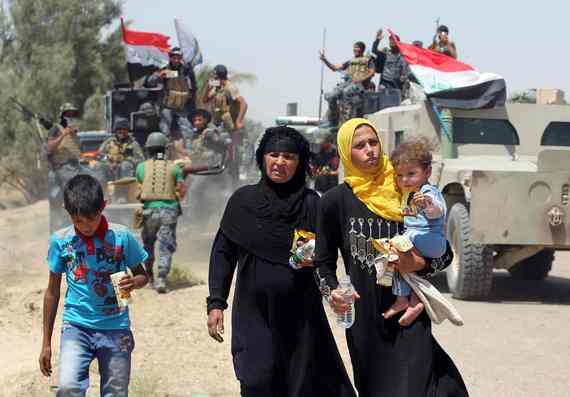 It's not hard to see why. The Iraqi civil war and continued instability emerged out of the engineered chaos of the US invasion in 2003, particularly because of the sectarian quota system of governance developed under the occupying power. This system categorized Iraqis according to their religious affiliation and distributed power along those lines, in the process increasing the importance of sect and religion in a way that largely-secular Iraq had never before experienced in modern times.

The sense of discrimination and exclusion by Iraqi Sunnis contributed to ISIS' initial ability to grow its ranks and seize large swathes of the country, and a massacre in Fallujah could reignite Sunni anger across the country against the government.

This is especially true given Fallujah's history under the US occupation. In the first year after the invasion, US soldiers imprisoned many and shot and killed dozens of innocent Iraqis in the city, aggravating tensions and spurring resistance. In 2004, a full-scale uprising broke out against the occupation, and in response the US nearly leveled the city, destroying 60% of its buildings and more than half of its homes.

Hundreds of civilians were massacred in the US assault, and chemical weapons deployed by the US army have led to a staggering rise in birth defects among the children of those who survived. Needless to say, the destruction understandably prompted a wave of anti-American fury that helped transform localized acts of resistance into a full-blown insurgency and civil war. 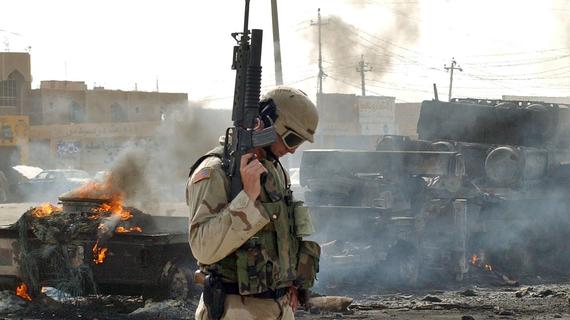 A US soldier stands beside a burned-out truck after an insurgent attack in Fallujah in 2003 (AP).

It is not hard to imagine such a scenario repeating itself today.

Even if there is little love for ISIS among the vast majority of Iraqi Sunnis, such an event would be a propaganda coup for the group and would reinforce the feeling that Iraq's government and the international community consider Sunni blood cheap. Just as the deaths of hundreds of thousands of mostly-Sunni Syrians at the hands of their government has become a tool for ISIS in promoting sectarian hatred, bloodshed in Fallujah would understandably lead to regional outcry.

Likely realizing this, influential Shia leader Ayatollah Sistani has demanded the army and militias respect the "ethics of jihad," asking them not to be "extreme" or "treacherous" and to respect the rights of civilians.

Although Prime Minister Haidar al-Abadi has promised to guarantee the safety of civilians in the city, he has been unable to do so in other recently-liberated areas. Statements by military officials that Shia militia leaders have been put in charge of determining if men fleeing the city are terrorists or not is leading to growing fears that abuses will go unchecked.

Part of the problem is that the Iraqi army has relied on Shia militias to bolster its strength in the fight against ISIS. Arrayed alongside the army are thousands of fighters from such groups, as well as many Sunni fighters hailing from in and around Fallujah. Iran, meanwhile, is providing crucial backing, and even as it tries to present itself as a non-sectarian ally against ISIS it has thus far failed to prevent allied militias from committing atrocities.

Shia militias have been repeatedly accused by Human Rights Watch of committing abuses in areas north of Baghdad. The liberation of Tikrit, for example, was followed by the looting and the destruction of the homes of many Sunni civilians. Such incidents were repeated in freed villages across the region, terrifying residents and preventing their return.

They have also carried out atrocities and targeted killings against Sunni refugees who have sought safety in Baghdad. Although Iraqis of all faiths have volunteered to provide for the millions of displaced refugees, attacks by militia members have fractured the feeling of national unity triggered among many by ISIS. They have also undermined Iraqi Sunnis' faith in the government's ability to be a non-sectarian force that can protect and represent all Iraqis equally. 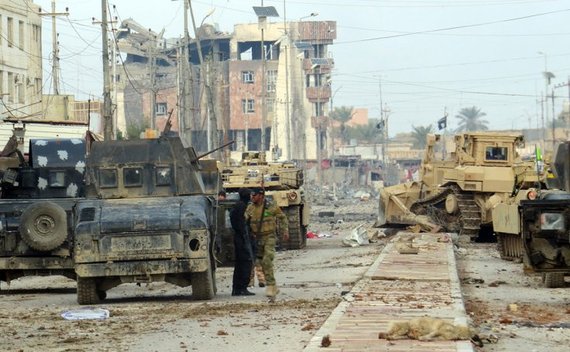 Street scene in Ramadi after its liberation (AFP)

In Fallujah, many fear that ISIS will deploy the "scorched Earth" tactics it is famous for, fighting for every inch of territory even if it means the entire city is left in ruins. If Iraqi forces respond in turn - pummeling ISIS and in the process demolishing much of the urban landscape - then it is unclear what benefit the victory will have.

Last December, the military managed to liberate the city of Ramadi but in the process destroyed nearly the entire city. Some refugees have returned, but the pyrrhic victory has left those who bravely return to their homes with almost no support or infrastructure, much less jobs and stability.

If the Iraqi government cannot guarantee the safety of its own citizens and refuses to hold its forces accountable for sectarian atrocities, then what's the difference between their forces and the militant groups they are fighting?

If they do not successfully minimize the bloodshed in the battle of Fallujah, this will be a question at the front of the minds of many Iraqis, and rightfully so.

It is up to the Iraqi government and its allies in Tehran and Washington D.C. to decide what the future of Iraq will look like. The shape it takes will depend on the days ahead.