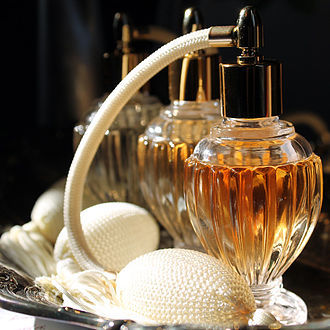 Answer by Tatiana Estevez, Ex-aromatherapist and I make my own perfumes

There are no absolutes to recognizing an expensive perfume from a cheap one. So much of what we find appealing about smell is linked to buried memories and what we associate a smell with. However if we're talking in general there are a few tendencies that might apply.

Cheap perfume tends to smell sweeter than average. This isn't because sweet smelling ingredients are just cheaper than others (although they can be), but because cheap perfume tends to be marketed for younger people (who tend to have less money). Younger people, particularly teenagers tend to have a poor sense of smell, so these sweeter scents are more subtle for them than they would be for a more developed nose.

Another indicator, but by no means a guarantee is that more expensive perfumes are more likely to have several levels of fragrance. Essential oils (the ingredients of many perfumes, but less likely to be pure in the cheaper ones) are divided into top notes, mid notes and base notes. The top notes you smell immediately and last about half an hour, the mid notes develop after half an hour for 2-4 hours after that. Then come the base notes which is what is left on your skin at the end of the day.

One of the reasons fake perfumes do so well and are much cheaper to produce, is because they replicate the top notes of a perfume and if you're lucky the mid notes. If you want to compare a fake perfume with a real perfume, you shouldn't compare them when first spraying, but see how they both smell on your skin after 2 hours, 4 hours and 6 hours. A cheaper perfume may smell bad or have no smell at all.

Base notes in particular can be some of the more expensive ingredients in perfumery. Having said that, more and more perfumery now uses synthetic fragrances as they are becoming fantastically sophisticated and can produce some amazing aromas.

Even cheaper perfumes that aren't fake, will still usually either be a single note or top note. If they do have medium or base notes, they won't be as pleasant or as sophisticated as more expensive fragrances.

As I said, none of these are definite indicator of cheapness, Chanel No.5 is a single note fragrance, but is not cheap and it is also possible to make a sophisticated non-sweet smelling cheap fragrance (although if I'm honest I personally find Chanel No.5 a trifle cheap smelling if not actually inexpensive).

Some people would compare perfume to wine, noting that expensive doesn't always mean better and isn't always recognizable as being pricier. There is some validity to this, but my impression of wine making is that a lot of the difference in expensive wines compared to cheaper wines, is due to the process of creating the product, whereas for fragrance a lot of the difference is due to the type of ingredients. Perhaps a more appropriate comparison to wine is that a good perfume may have the sophistication of a blended wine, compared to a single varietal. Imagine how a good Bordeaux tastes compared to a table wine, yet both will have their fans.