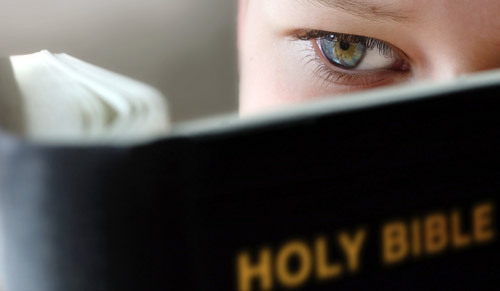 In light of the conversations sparked by President Obama's remarks last week at the annual National Prayer Breakfast, I find that I keep wanting people to stop and take a look at some passages that are in the Bible. It is not sufficient to say that the Inquisitions and Crusades, even slavery and Jim Crow in this country, were often justified in the name of Christ. Yes, these things are true. No question. But they were also backed by Biblical passages, by ideas contained in more than one place within the pages of the Bible.

This is not a matter of belief but of unchanging texts. This is a matter of potentially harmful ideas being codified in sacred scriptures, which means that the basic underlying behaviors they lead to will continue to be justifiable, regardless of the century we live in.

I also think we should take a moment to reflect on there being various kinds of violence or harm that can be justified based on someone's reading of scripture. While extremist actions and choices get a great deal of air time in media platforms, there are also less obvious forms of violence all around us, even in the West, based on ideas from the Bible. For instance, if you were surprised by any of the Super Bowl commercials that endorsed a positive message for women/girls that means that you have a) not typically seen women represented as equals with men, and/or b) been living with an unspoken belief that women/girls are less important than men/boys. It might seem to be subtle, but I assure you that the ongoing effects of this imbalance are quite significant. Throughout the Bible women are spoken of and treated as second-class citizens, even as mere property of men.

What about the violence, justified by particular readings of a few biblical passages, which people direct toward members of the LGBTQ community? This hatred for some people, biblically justified, has taken horrifically violent forms over the years.

Also worth noting is all the violence that went hand-in-hand with the colonizing efforts by Western countries for hundreds of years, all around the globe. Much colonization was biblically justified, as well (usually using the conquest narrative found in Joshua).

One could even suggest that when "Bible believing" Christians use rhetoric that ensures that lines are drawn and sides are taken - instead of working to find common ground and mutually beneficial compromises - then they reflect the "us vs. them" mindset often found in the Bible. You're either with us or against us does not play out well in the sandbox of life, but it is attributed to Jesus in Matt. 12:30.

While there are passages in both testaments of the Bible that speak powerfully and beautifully about love (Exodus 34:6; Jer. 31:3; 1 Cor. 13; 1 John 4:7-8), there are also passages in both testaments that suggest that God hates those who do not love him (Leviticus 26:14-33; John 3:18, 36). It is simply a matter of cherry-picking which verses one wants to uphold as authoritative on this topic.

Much of what I have seen from people over the past few days has highlighted the antagonistic Hadiths, those that can lead to hostility toward non-Muslims. But there are also Hadiths that talk about love and that true Muslims will live with integrity and honesty and will love for others what they love for themselves.

To be clear, both the Qur'an and the Bible can be used to endorse love or hatred. It is that simple. And it is deeply important that we be honest about this, because people are reading both books, to various levels of love for or intolerance of those who believe differently than them.

I loved that President Obama claimed that truth is available to all people, and that we all need to be a bit humble on this issue, since none of us is in sole possession of the truth. I must also point out, however, that there is a strong tradition within the belief system of Christianity that suggests that the ultimate truth is found in Christ (John 3; John 14:6). While I might agree with Obama's comment, just because he said it does not negate the fact that there are biblical passages and doctrines of the Church that say he is wrong on this one. Something to think about.

As long as people continue to read the Bible (or the Qur'an), there will be a need to have this conversation.

The trick is that we need to be able to see, truly recognize, these elements when we encounter them in any sacred text, and then sort through the difference between what was penned hundreds of years ago and what we know to be loving and true today. My intention in Permission Granted: Take the Bible into Your Own Hands, available in March, is to help people do just that: read what is there in the Bible, not what you have been told is there, and sort through the implications of it all for yourself. I do believe that our mutual well-being on this planet depends upon it.