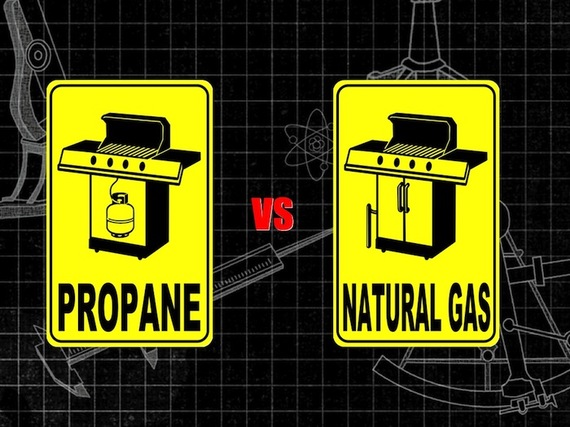 A hundred percent of people, according to a recently released poll, say that a double-cut rib eye steak liberally seasoned with Santa Maria spices (a blend of salt, pepper and garlic), grilled over a backyard BBQ is the quintessential and most delicious thing they have ever eaten in their entire lives.

And this poll has no margin of error. Not + or -3 percent. It has zero.

How can an opinion poll be as accurate as a Peyton Manning pass? You know, when Peyton Manning was still good. How can you, the reader, trust this poll's veracity? Here's how: It was a poll conducted by the prestigious polling firm, Jon Hotchkiss, who polled 100 percent of the person sitting at his desk as he was thinking about the best thing he ever ate.

Anyway -- the most popular day of the year to BBQ is July 4. While the least popular day... is Yom Kippur. I might have made that last part up. So, why is BBQ so popular? 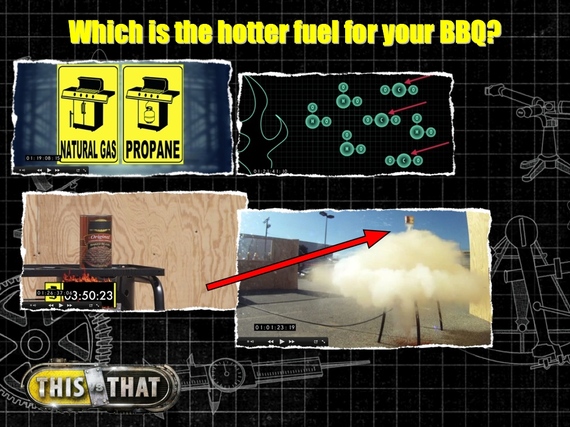 To determine the hotter BBQ fuel, This vs. That blew up giant cans of baked beans.

We love fire. Well, men mostly. Men love fire. Women are OK with a fire. But their heart doesn't begin to flutter, they don't begin to salivate, they don't get a pre-rection -- that's the precursor to an actual erection, around a BBQ the way men do. Ladies, you know that feeling some of you you get when you're at Nordstrom and the Christian Louboutins are marked down to $250 from $850? That's how men feel around a BBQ times three squared.

Part of what determines a fuel's temperature is the amount of CO2 and water given off during combustion.

Of the grillers who are using combustible gas as a fuel, 65 percent are using propane while the other 35 percent are using natural gas. Propane comes in those little pony-sized kegs, which can be refilled at a gas station on the outskirts of your town, near the methadone clinic, for about 20 bucks or so, give or take. Natural gas, on the other hand, comes out of a pipe at your home.

Yes, while plentiful and cheap, hydrogen is crazy combustible, has a low ignition point and is uniquely unstable. In the scientific community, hydrogen is known as the "Gary Busey of fuels."

And while propane is a little less convenient, my research indicates that most people think propane and natural gas are pretty much the same. Well, guess what? They are not. And to find out what is the hottest BBQ fuel, we blew up Costco-sized cans of baked beans... under the supervision of Dr. Alf Bacher, a professor of Chemistry at UCLA, who not only explains the chemical process of combustion -- he makes 100 percent sure we don't blow ourselves up.

Jon Hotchkiss is the creator of This vs. That, a new six-hour TV series that uses science to investigate the world within arm's reach.