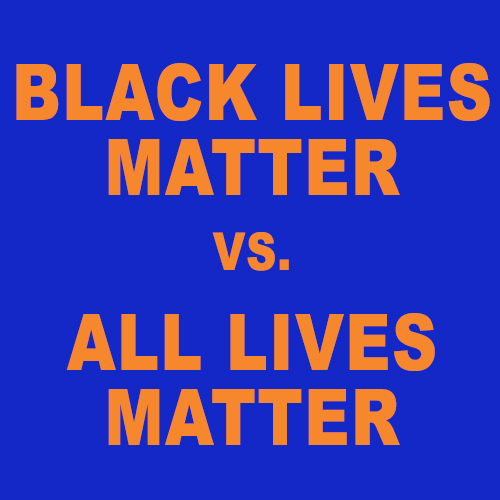 Black Lives Matter is working to "broaden the conversation" around race from the legal system and black poverty to the burdens on black women, children, black queer and trans folks, and blacks with disabilities.

In response, some white folks have countered with the phrase, "All Lives Matter." While this is seemingly a more empowering as well as a diversity affirming response, it is neither.

In the Shadow of 'All Lives Matter'

1. In the shadow of 'All Lives Matter' is a form of willful colorblindness -- the erasure of the issue of race.

When people say "All Lives Matter" in response to "Black Lives Matter," they are not simply opening their arms to the greater diversity of humanity. Instead, they are taking race out of the conversation. While the statement masquerades as a bright and inclusive light, in the shadow of this statement hides a willful ignorance of America's racist past and present.

There is not doubt that racism exists today. The research evidence is vast, clear and widely available from differential stop and frisk rates, sentencing levels and job hiring.

A most telling statistic about the difference in the lack of valuation of a black life comes from a study conducted by Allan Collard-Wexler, an NYU Stern School economist: "[T]he cost of adopting a black baby needs to be $38,000 lower than the cost of a white baby, in order to make parents indifferent to race."

Adding insult to injury, asserting that all lives matter in response to black folks declaring that black lives matter, turns our eyes away from acknowledging America's racist past, functioning as a form of dismissal or denial.

Through the constitution, slavery and Jim Crow laws, America stood for the belief that some lives were more human, more worthy -- that some live mattered more. How can we forget that America codified in its constitution (the same constitution that some insist must be strictly and literally interpreted in its original form) the notion that a black life was only considered to be 3/5ths of a white life?

If we stop highlighting and focusing on black lives, but instead focus more globally and generally on all lives, then we become complicit in not seeing color as a factor in American life. Putting it simply, if we erase race, we won't see racism.

2. In the shadow of 'All Lives Matter' lurks the privilege white folks have to not experience their own lives in racial terms.

Let's face it, most white people don't regularly think about themselves as white. We are not made to think about our race, because we are not living in a pervasive systemic atmosphere that injures us because of our skin color. As such, we easily think of ourselves as a "just a person," as a human being belonging to the human family.

But when a person is regularly injured because of a quality, it is veritably impossible to enjoy the luxury of ignoring that quality. As a Jewish man, my Eastern European brothers and sisters could not ignore the fact that they were Jewish. If they "forgot," they were quickly reminded! Women in boardrooms, disabled people getting on a bus, gay teens at a high school dance, and black youth in a school cafeteria are all aware of their social identity; straight white able bodied males ignore their social identity.

They enjoy the privilege of being free from that concern. (See also Beverly Daniel Tatum's masterwork, Why Are All The Black Kids Sitting Together in the Cafeteria?)

When a white person responds to the statement "Black Lives Matter" by countering with "All Lives Matter" they exhibit a blindness to the privilege of living outside of a painful and marginalizing lens that highlights their race; a privilege not enjoyed by black and brown people.

In the words of Jarune Uwujaren, "[I]f you have trouble seeing race or are tired of people making things about race, realize that if they could, most people of color would ignore race too."

3. In the shadow of 'All Lives Matter' is an aggressive resistance to focusing on the value of black lives.

The statement, "All Lives Matter" did not arise in a vacuum. It was not born of a passion for the value of all life; it is not a world-wide social movement for justice. It was a response, a retort, a counter-point to the statement "Black Lives Matter." While not everyone utters these words with this intent, the phrase nonetheless functions as a dismissal.

As such, we cannot only evaluate it purely in terms of its accuracy (i.e, "Isn't it true that all lives matter? Wouldn't it be good to live in a world where all lives mattered?") or as a general statement of care for all beings, including black beings. It is not simply said as a matter of truth or a statement of values. Instead, it's a rebuttal to the statement "Black Lives Matter."

Instead of communicating a love for all beings, "All Lives Matter" are words of negation, repudiation, and refutation. They are words of debate; they are fighting words. What are the users of these words fighting? Simple: That Black lives matter!

In a world that would resist or belittle the declaration that Black Lives Matter, that would censor those who speak out for the beauty, power, intelligence and moral authority of black people, I fear there would be far too many black children doing a lot less smiling, laughing and giggling and a lot more hungering for food, safety, and a sense of self worth.