Twitter has come a long way in user growth, gone public (NASDAQ:TWTR) and come under fire for growth/lack of growth and revenue numbers.

The stock chart looks like a runaway iceberg ran through the Grand Canyon. Here it is: 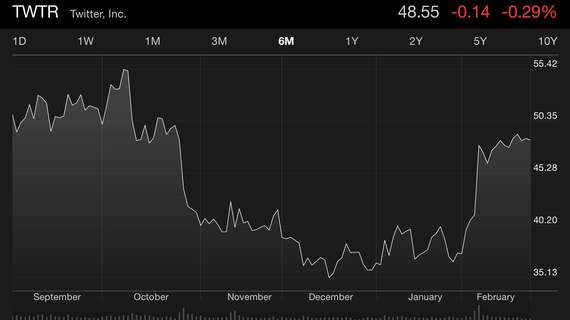 Meanwhile, back in startupland, private ventures such as Uber, Snapchat, Airbnb and others are getting valuations that'd make a public market investor blush (or laugh).

Twitter's market value stood at about $30 billion last I checked. Compared to the lesser-known compadres above something seems amiss. Take Facebook value at $223 billion and the debate extends to another level. Is Facebook really 7x a Twitter?

Where Facebook seems to leverage its platform more to sell ads, Twitter doesn't yet seem to be "fully realized" in terms of what it could be.

To understand this let's consider the levels of interaction. Facebook revolves around personal or quasi-personal interaction, someone you know sharing a tidbit of info or funny photo. Engagement level is high, "emotional meaning" built in.

Facebook is kind of like a private dining room at a popular restaurant. Stories and moments shared among a circle you know.

In contrast, Twitter's "conversations" and information flow seem more "corporate," "branded," less personal. A lot of media use Twitter as link referrals to stories and companies do the same for announcements.

Twitter is more like a banquet hall, noisy and echoing with a cacophony of voices. Today that is. And that's why I believe the stock pales compared to Facebook and even the value of some of the private ventures I mentioned.

On the plus side Twitter is a global brand, very difficult to build that. Media the world over use Twitter as their media outlet. Celebs use it. It has changed public relations and marketing.

That said, the "true" value of Twitter lies in what it could be doing. I don't own the stock. What I'm sharing today has to do with seeing a company and potential, avenues and expansion, to what it could be "grown up."

As an analogy, as a sophomore in high school Michael Jordan stood 5' 11" tall. He didn't make the varsity squad that year. Of course we all know what happened later.

Unlike Jordan, however, Twitter may or may not grow to it full potential. There is no predetermined DNA here.

The DNA will be choices Twitter makes to grow.

A few of the areas I see with massive potential for Twitter are:

and half a dozen more even more powerful. Many observers show stats that Facebook, Twitter, or ads don't convert to clicks, etc. This is seen as a negative and it is -- if you're in the ad business. What Twitter has yet to realize is it is a content network, yet lacks a self contained way of benefiting (other than sloppy promoted tweets).

Anyway, the product pipeline at Twitter could be magical if thought of differently.

While many writers will use the word "worth" in a story I don't. The term 'value' is the proper way to address a company valuation.

As someone who's been in business development since Netscape I can see this flatfooted geeky "teen" called Twitter and wonder if it'll always lay up or ever get to dunk?

Steve is the founder of hapn.cool, and has been a venture capitalist and executive at public and private companies.