I'm not a big follower of reality television, but was happy to hear about TLC's new reality show "All-American Muslim." We know that personal contact is the best way to break down stereotypes, but with Muslims less than 2% of the U.S. population, many Americans will never get to know a Muslim. Meeting us through reality television might not be ideal, but it's better than nothing.

After watching "All-American Muslim" for a few weeks, I now believe that the show is good for our community beyond the way it might lessen prejudice against Muslims. The additional benefit is that the show has engaged our community in discussing some of the many challenges we face making distinctions between critical religious values and flexible cultural practices. In the fourth episode, the issue of Muslims having dogs in the home came up, and this is worth further discussion.

In this episode, newlywed Arab-American Shadia tells Jeff, her Irish-American convert husband, that she does not want his dog to move with them to their new home. Shadia has allergies, and her asthma is exacerbated by the dog's hair. This is an understandable and common dilemma. But Shadia bolsters her position with statements about the impermissibility for a Muslim to have dogs in the home. Her father will not pray in the house if the dog is there, she says, because dog hair is impure and a prayer space needs to be pure. Later, Shadia backs off from the religious argument, admitting that the main reason she doesn't want a dog in the house is "I wasn't raised with dogs; I'm not used to them." I appreciated this moment of honesty. The use of a religious norm as a trump card in an argument we want to win is a temptation we all face.

So what is the Islamic position about dogs? In fact, there are a variety of opinions according to different legal schools. The majority consider the saliva of dogs to be impure, while the Maliki school makes a distinction between domestic and wild dogs, only considering the saliva of the latter to be impure. The question for Muslims observant of other schools of law is, what are the implications of such an impurity?

These Muslims should remember that there are many other impurities present in our homes, mostly in the form of human waste, blood, and other bodily fluids. It is fairly common for such impurities to come in contact with our clothes, and we simply wash them off or change our clothes for prayer. When you have children at home, it sometimes seems you can never get away from human waste. But we manage it, often by designating a special space and clothing kept clean for prayer.

Some Muslims object to having a dog in the home because of a prophetic report that angels do not enter a home with dogs in it. If a Muslim accepts this report as authentic, it still requires an analysis of context to determine its meaning and legal application. Ordinary people are not recipients of divine revelation through angelic messengers, so it is possible that this statement, although in general form, might suggest a rule for the Prophet's home, not all homes. This interpretation is strengthened by the fact the Qur'an states that angels are always present, protecting us and recording our good and bad actions.

Whatever the implications of this report, there is no doubt that the Qur'an is positive about dogs. The Qur'an allows the use of hunting dogs, which is one of the reasons the Maliki school makes a distinction between domestic and wild dogs - since we can eat game that has been in a retriever's mouth. But most compelling is the Qur'anic description of a dog who kept company with righteous youths escaping religious persecution. The party finds shelter in a cave where God places them in a deep sleep; the Qur'an (18:18) says:

You would have thought them awake, but they were asleep
And [God] turned them on their right sides then on their left sides
And their dog stretched his forelegs across the threshold

This tender description of the dog guarding the cave makes it clear that the animal is good company for believers. Legal scholars might argue about the proper location of the dog - that he should stay on the threshold of the home, not inside - but home designs vary across cultures. In warm climates, an outdoor courtyard is a perfectly humane place for a dog - its physical and social needs can be met in the yard. This is not the case in cold climates, where people stay indoors most of the day for months at a time.

Extreme concern about the uncleanliness of dogs likely arose historically as Islam became more of an urban phenomenon. In medieval cities, as in modern cities in underdeveloped countries, crowding of people and animals leads to the rapid spread of disease and animal control is not a priority. A few run-ins with an aggressive or diseased animal can result in excessive caution, fear and negativity.

I have long felt badly that many Muslims fear dogs as a result of negative experiences and that they resort to confused religious reasoning to shun them. It is one of the reasons why I try to introduce my students and friends to my very sweet, very large dog Ziggy. 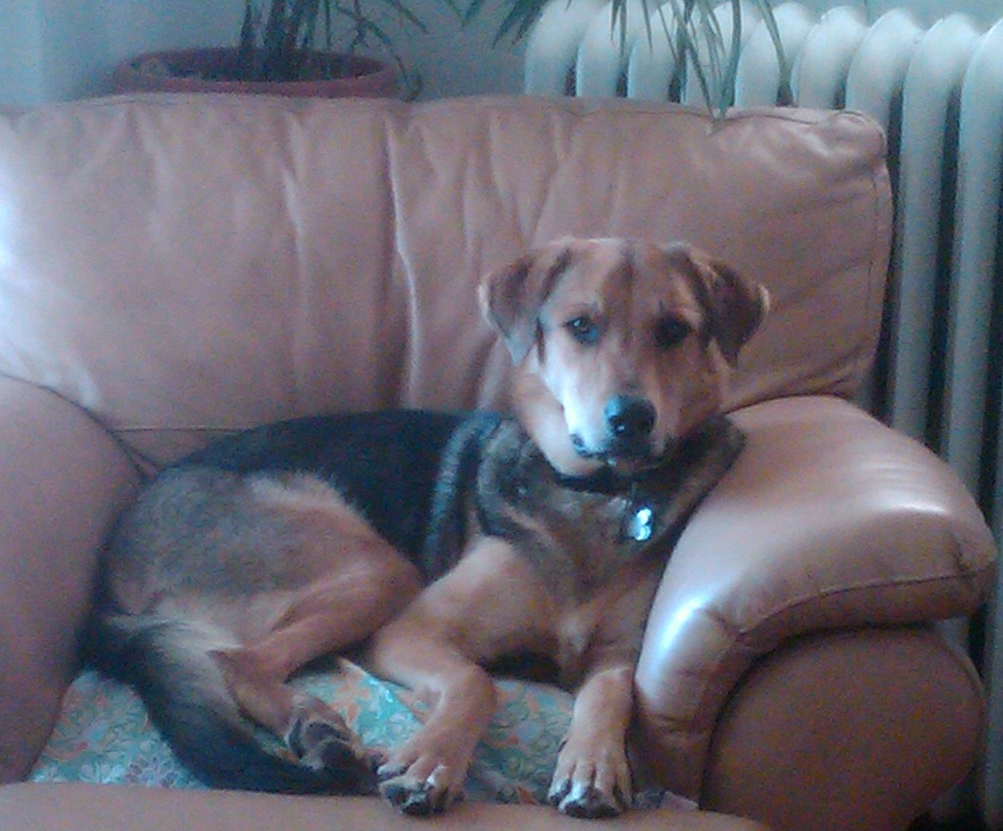 Ziggy came into our home to be like the dog in the cave: to keep company to my child who lies in exile from the world because of a debilitating illness. He has been nothing but a blessing - guarding the house while we sleep, forcing me to exercise daily, and showing us, as he happily follows our tiny cat around the yard, that if cats and dogs can get along so well, then we people have no excuse.

There is another reason why I love having my dog around. Ziggy came from Tennessee. He was rescued by an animal control officer who uses her own resources to save dogs who would otherwise be destroyed in a few days. Tina saves as many dogs as she can by bringing them home and putting them up for adoption on the internet. When I called Tina to speak about adopting Ziggy, she had 65 dogs she had rescued out in her yard. After being disheartened by some terrible things that have come out of Tennessee lately - mosque burnings and anti-Shari`ah legislation among them - I love looking at Ziggy and thinking about the woman with the thick southern accent and big heart who saved his life.