As Baltimore erupts, The Baltimore Sun gives free access to its coverage. 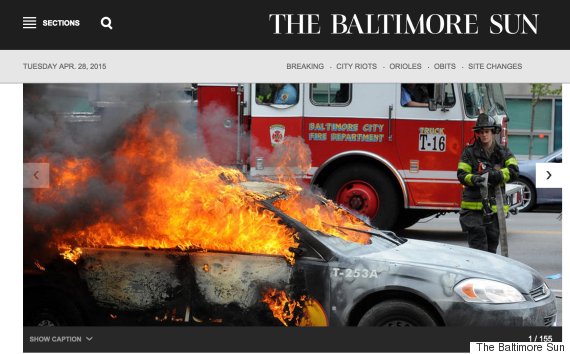 The Baltimore Sun is making sure that everyone who wants to can get easy and free access to information on the city's current unrest. Riots broke out on Monday following the funeral of Freddie Gray, the 25-year-old black man who died of a spinal injury while in police custody earlier this month. Clashes between police and protesters have grown dangerously violent, with people setting fire to cars, torching businesses, throwing rocks and bricks and attacking media. On Monday night, Maryland’s governor Larry Hogan declared a state of emergency and called in the National Guard along with setting a citywide curfew. The riots have opened up a wider conversation on police brutality in Baltimore.

The Sun announced on Monday night that it would suspend its paywall and offer free, easy access to all its coverage.

We have made our coverage of the Baltimore riots free and open on http://t.co/bNR6bmZLyS. (no registration/digital subscription required).

In recent days, the newspaper has published a range of original reports, features, and videos on the unrest and the Freddie Gray case. As what's happening in Baltimore has captured the nation's attention, The Sun's decision to open up its coverage to all is helping to spread information as more and more people strive to help and find solutions to the city's immediate and longstanding challenges.

You can also check out The Baltimore Sun's front page on Tuesday.

Quartz: China is building a Great Wall of Trees to fight climate change and the encroaching Gobi Desert