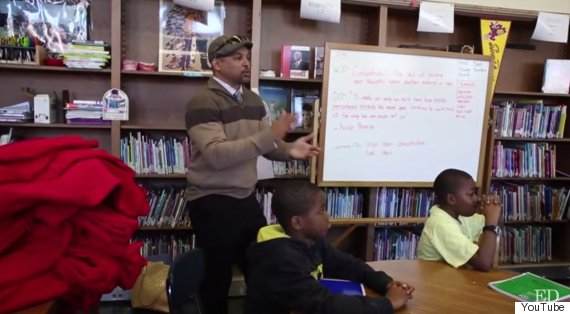 The Manhood Development Program, an education initiative created by Christopher Chatmon in Oakland, California, aims to upend the stereotype around black male students underperforming in school. Chatmon and his team meet with groups of boys in a class-like environment to provide support in a range of ways, from mentoring to connecting boys with community leaders and role models.

“Here we are in a majority-minority district, and our leaders didn’t see that our African-American male students could be a success,” said Chatmon, who directs the district's Office of African-American Male Achievement. “We had to change the narrative that had normalized failure in black children.”

The program, which launched in 2010, now helps 2,500 boys, and there's a waiting list. The initiative has become a model for school districts nationwide. Since its launch, the Manhood Development Program has reduced the number of suspensions and absences of its participants. Members of the program also have higher grade point averages than black students who are not in the program. Sixty-four percent of the program's students said the class is "like a family to them."

Vajra Watson, the director of research and policy for equity at the University of California, Davis, wrote that the program is "raising the bar for the nation and represents a model for institutionalizing efficacy and disrupting barriers to achievement."