The Washington Post: A growing experience: Prison gardens transform inmates who tend to them 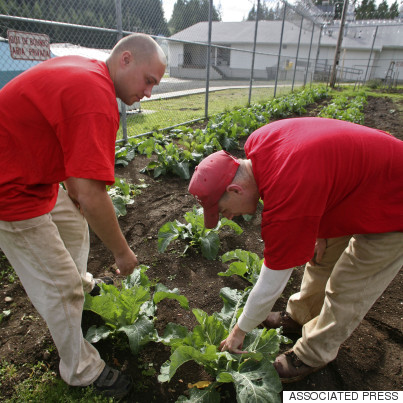 "It’s planting season behind bars, where officials from San Quentin in California to Rikers Island in New York have turned dusty patches into powerful metaphors for rebirth," The Washington Post's Michael S. Rosenwald writes. "The idea: transform society’s worst by teaching them how things bloom — heads of cabbage, flowers, inmates themselves."

The enthusiasm for prison gardens is a testament to their ability to transform both the prisoners' lives and the community around them. Eastern Correctional Institution in Westover, Maryland, for example, uses the food to feed residents of Somerset County -- one of the poorest areas in the state with the highest levels of childhood obesity.

"Other prisons donate the food to the poor," Rosenwald writes, "a powerful form of restorative justice where inmates help people living in situations very much like where many of them came from."

Some prisons are growing food to feed their own inmates, a way to incorporate healthier foods and cut back on food-buying costs.

Prison gardens may even have a positive impact on recidivism rates. Research on the gardening programs in California prisons found that less than 10 percent of those involved returned to prison after being released. Gardening also gave the inmates a set of job skills that made it easier for them to find work once released.

If nothing else, the gardens give prisoners a reason to feel good again -- that feeling that they are doing something important and giving back to those in need.

PRI: How some nail salons in California are finding a less toxic way to work

The What’s Working Honor Roll highlights some of the best reporting and analysis, from a range of media outlets, on all the ways people are working toward solutions to some of our greatest challenges. If you know a story you think should be on our Honor Roll, please send an email to our editor Catherine Taibi via catherine.taibi@huffingtonpost.com with the subject line "WHAT'S WORKING."