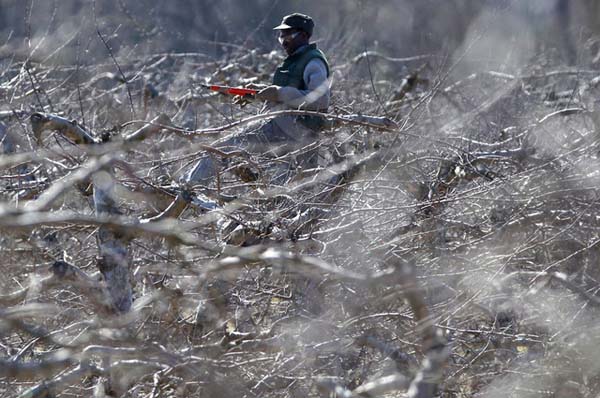 A worker at Goold Orchards in Schodack, N.Y., was pruning apple trees two weeks ago. This week, orchards from the Midwest to the East Coast were threatened by overnight frosts. (Mike Groll/AP)

Last week, when I cautioned in my blog that we shouldn't be so giddy about warmer-than-normal temperatures in March, people called me a killjoy, a wet blanket, a nattering nabob of negativism, and worse.

I now have more bad news.

As it turns out, a global warming-induced mild winter and early spring not only can ruin vacation plans and encourage invasive species, they can increase the risk of plant damage from late-season frosts.

Why is that a problem? Freezing temperatures following warmer weather could mean millions of dollars in crop losses--and higher prices for lower quality produce at the market. Given the cold overnight temperatures over the last few nights in some parts of the country--and the possibility of more frost over the next few weeks--that could be what's in store for this year.

This scenario played out back in 2007. The eastern half of the United States experienced unusually warm temperatures in March--the second warmest in U.S. records to date--prompting trees and other plants to develop earlier than usual. This premature leaf and bloom made them vulnerable to a mass of cold Arctic air that swept through the central Plains, the Midwest, and much of the Southeast. Between April 4 and 10 there were more than 1,200 record lows in the lower 48, with temperatures in the South over the Easter weekend dipping below 25 degrees F, which can wipe out 90 percent or more of most crops.

For farmers, the Easter freeze was catastrophic, causing an estimated loss of $2.2 billion in field crops, fruit crops and ornamental plants. According to an October 2007 report by the National Oceanic and Atmospheric Administration and the U.S. Department of Agriculture (USDA), winter wheat growers in nine South and Midwest states lost some $439 million. Peach growers in 11 states produced 76 percent less than the previous year--a $99 million loss. Apple growers in 10 Southeast and Midwest states, meanwhile, suffered a 67 percent drop in production from 2006, losing nearly 319 million pounds of apples worth about $76 million. Other crops, including alfalfa, apricots, Asian pears, blackberries, blueberries, corn, grapes, hay, pecans and plums, also took significant hits. All told, the USDA declared nearly 1,000 counties in 24 states disaster areas, making farmers in those counties--as well as contiguous ones--eligible for low-interest emergency loans.

In March 2008, the journal BioScience published a paper by Oak Ridge National Laboratory scientist Lianhong Gu and seven other researchers explaining the implications of the 2007 freeze for a changing climate. Spring frosts are not unusual in the regions hurt by the Easter freeze, they pointed out, but until recently, it was rare for such an extreme freeze to follow an extended period of above-normal temperatures. And if nothing is done to dramatically curb fossil fuel emissions, stretches of above-normal temperatures are likely to become more commonplace.

Likewise, if events like the Easter freeze became routine, they would undercut the potential benefits of a longer growing season and fewer frosts due to a warming climate. Indeed, Gu and his colleagues caution there would not necessarily be any reduced risk of frost damage.

"Farmers and other land managers may respond to warming and reduced frost frequency by planting earlier or by planting alternative species," they wrote. "Natural plant populations and animal species might advance the development of crucial phenological [life cycle] phases, or with sufficient time, shift their ranges poleward or to higher elevations. With such adjustments or adaptations, the risk of frost damage could remain the same or even become greater."

"This [April 2007] freeze should not be viewed as an isolated event," Gu and his co-authors concluded. "It represents a realistic climate change scenario that has long concerned plant ecologists."

That brings us back to 2012. Over the last several days, the National Weather Service has issued freeze warnings for a swath stretching from the central Great Lakes region to the East Coast, and farmers are rightly worried. A wide range of crops are threatened, including apples, apricots, cherries, grapes, peaches, pears, and possibly strawberries.

"It's scary and amazing, but hopefully the crop will survive," Bob Barthel, a Wisconsin apple grower, told Milwaukee's ABC affiliate WISN on Wednesday. "It's not just my farm in Mequon, it's all the perennial crops, the apple crop nationwide. It's apples, cherries, blueberries, all the fruit crop is at risk this year."

Two years ago, Barthel, who has 19,000 apple trees in his orchard, lost nearly 90 percent of his crop to frost damage after they started budding on April 1. This year, they started budding on March 18. Some crops can be protected at night with smudge pots--kettles that radiate heat--or sprinklers that generate mist around plants to form protective ice. Barthel is using a sprinkler system to try to save his strawberries, but there's not much he can do for his apples.

Fortunately temperatures are supposed to rebound over the next few days, but most farmers won't be able to breathe a sigh of relief until early May when the chance of overnight frost finally diminishes. And then they will have next year and the year after that to worry about. Although it is impossible to predict because of all the variables, Gu and company's "realistic climate change scenario" may just become an annual occurrence sometime this decade or next.

But before you throw up your hands in despair, keep in mind that we are beginning to seriously address this problem. More than half of the states now require electric utilities to increase their reliance on clean, renewable energy. New fuel economy standards for cars and trucks will go a long way cut oil consumption. And standards announced just this week for new power plants will clean up carbon emissions for the first time. That all is certainly good news, but there is still much much more to do.

Elliott Negin is the director of news and opinion at the Union of Concerned Scientists.