I am a proud breastfeeder. I had it really hard in the beginning -- my son wouldn't latch and ended up in the NICU, I had to pump (which I hated) before I successfully got him back to the breast, we dealt with a dairy allergy that put me at odds with my pro-formula pediatrician -- so I feel like I'm entitled to be proud. I went through a lot, and now, at 14 months, we are still going strong.

I don't say that to be smug. I don't say that because I think I'm better than anyone else who does not breastfeed. I know that breastfeeding is hard. If it's not your thing, or it's too difficult and focusing on other things would better allow you to enjoy motherhood, I get it. It's not up to me to say that you should breastfeed. As long as you are informed (which sadly many women are not), then it's really up to you.

But that said, it really pisses me off when people who are not breastfeeding (men or women) say they "support" it but want it kept discreet or private. Such was my reaction when a Facebook friend of a friend posted about how annoyed she was at Alyssa Milano's recent breastfeeding Instagram photo. "Since when did breastfeeding become a spectator sport?" she asked. "I don't want to see it... There is underlying judgment if one is fed 'the less natural way.'"

I think there are a couple things going on with comments like these, which arise anytime a celebrity posts a breastfeeding selfie. One is that there is still stigma around breastfeeding in public. It is still taboo. You can't say that it's only acceptable if the mother uses a cover or "is discreet," otherwise she's flaunting it and shoving her boobs in your face. I have used a cover because I don't personally like to be too exposed when nursing in public -- but that's me. There shouldn't be rules or contingencies around how someone is allowed to feed their child. That's not supporting breastfeeding. That's not normalizing breastfeeding. That's allowing it to remain marginalized.

Second, I think there is a lot of guilt around the issue of breastfeeding, like there is around so many mom-centric issues. Often, women who did not breastfeed feel guilty -- not that they should -- and then take it personally when others "flaunt" their breastfeeding, as if there is implied judgment. I get this. For six years while I struggled to get pregnant, I felt like children were flaunted and shoved in my face everywhere I went, because I couldn't have one. I hated it. But I knew that their parents weren't doing it out of disrespect (well, except maybe when they brought their kid to the fertility clinic, where they're pretty much guaranteed to run into emotionally distressed infertiles. But maybe they couldn't get a babysitter, so what can you do?). People need to live their lives, and that included inundating my Facebook feed with pictures of their children. They weren't trying to make me feel bad, even if I did feel bad after seeing their pictures -- that was my issue, not theirs. So I understand why women who aren't breastfeeding don't want to see breastfeeding; but should that mean nursing moms need to keep it private for fear of hurting others' feelings?

A tactic my infertile self used for dealing with the barrage of kids I encountered was to downplay their importance. "So what, you have a kid. Any idiot can get pregnant," I would think to myself. I see this now with breastfeeding: "So what, you are breastfeeding. Everyone does it, so why post a picture on Twitter?" people say. But I know now that it is a big deal to have a kid, and likewise it is a big deal to breastfeed.

Breastfeeding is one of the most beautiful things I've ever experienced. I want to be able to say that without feeling guilty (see, there's enough guilt to go around) for making someone else who doesn't breastfeed feel bad. I want to celebrate it. And so, I think, did Alyssa Milano. Why shouldn't we be able to revel in the joys of motherhood, wherever it is that we find them? 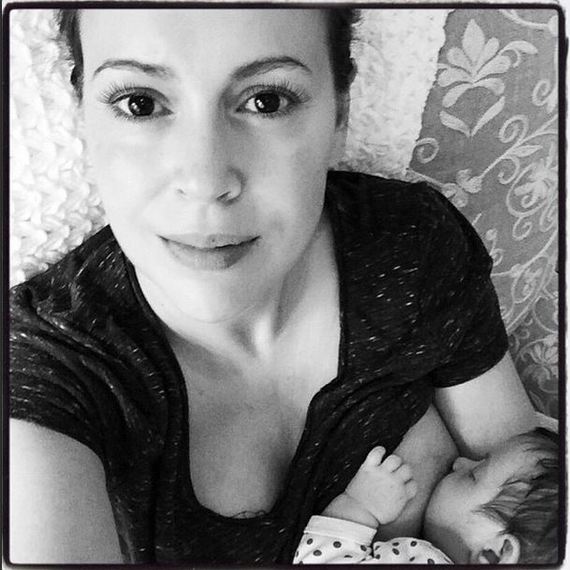 More:
breastfeeding in publicParentsalyssa milanonursing in publicBreastfeeding
Newsletter Sign Up
Raise the kind of person you'd like to know
Subscribe to our parenting newsletter.
Successfully Subscribed!
Realness delivered to your inbox