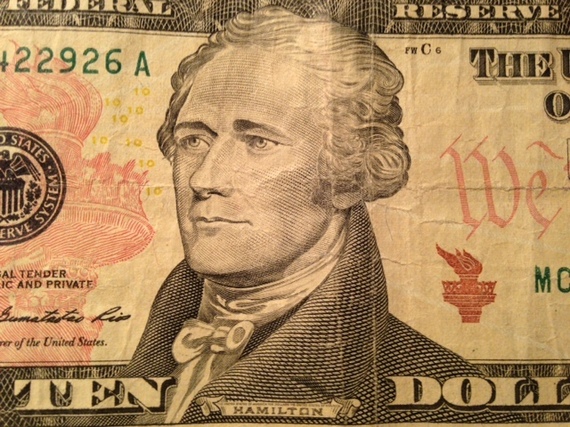 When I was in high school, pre-Ancestry.com, my grandmother assembled a family tree. She wrote letters and made phone calls to relatives, searched through county records, inspected family bibles. The name of the oldest ancestor she located, Nicholas Mills, appeared in a document dated 1687 in New Kent County, Virginia. His grandson, Nathaniel Mills, was Captain of the Orange County Militia in 1777 and my entrée into the DAR (Daughters of the American Revolution).

Growing up in a small Virginia town, I was hardly the only girl to be in the DAR. Genealogy was a big deal. One family had a connection to Thomas Jefferson. Another to Robert E. Lee. People were eager to be a descendant of an FFV (First Families of Virginia), a Randolph or Byrd or Washington. Desperate for a more important name than the un-famous Nathaniel Mills, I asked my mother, "Are we related to Alexander Hamilton?"

My mother shook her head and lowered her voice. "Ann," she said (imagine a strong southern accent). "He was illegitimate."

We never spoke of Alexander Hamilton again. My mother told me there was a chance of a connection to Patrick ("Give me liberty") Henry on my father's side so years later, after Ancestry.com appeared, I did some digging. Unfortunately twice-married Patrick Henry had seventeen children so I gave up. Seventeen?

But lately my genealogical priorities have changed. I know who I want to be related to - illegitimate or not, I choose Alexander Hamilton.

Sorry, Mom, but Alexander Hamilton is cool. He raps. He dances. He's sexy. Yeah, and he also founded the United States financial system, was the first Secretary of the Treasury, led the Federalist Party - let's face it, he was brilliant, one of a kind. And now there's a musical about him, the biggest show on Broadway. How many Founding Fathers have that? (Yes, there's 1776, but that's more of an ensemble - one of its best songs is "Molasses to Rum.")

Unless you've been living under a rock, you've heard of Hamilton, the musical. Lin-Manuel Miranda (of In the Heights fame) created and stars in the show, based on biography by Ron Chernow. A multi-ethnic cast, music that ranges from rap to hip-hop to Broadway, it's history made accessible.

Do you own the original cast recording yet? Get it. Have you read the massive Chernow bio? Get that, too. You won't be sorry. Although you might drive your family insane talking about the book - "Did you know Hamilton wrote a pamphlet in 1797 to prove he was innocent of financial corruption, only he went way TMI and admitted cheating on his wife for years with Maria Reynolds?" Or by constantly bursting into song - sometimes I'm a Schuyler sister, sometimes I'm King George III. It depends on my mood. (My family is very patient.)

My father - last name Hamilton (!) - taught American History and was disappointed when I said the founding of the United States was boring. Sadly he passed away before Hamilton, the musical. Oh, Daddy, I would tell him. You were right. The Battle of Yorktown, it's exciting. ("The code word is 'Rochambeau,' dig me?") Cabinet battles about a national bank. U.S. neutrality. Federalists and Republicans, mudslinging, duels, affairs. Who knew? Well, my father did, even though he was unable to convince me. But happily Lin-Manuel Miranda and company are around to teach a new generation that history is amazing.

A new generation will learn about Hamilton, the underappreciated Founding Father. They'll see another side to Thomas Jefferson. As a graduate of the University of Virginia, Mr. Jefferson's University, I worry they'll take away my degree if I criticize him. But in the musical and biography, Jefferson comes off as a super-wealthy, slave-owning, over-ambitious and manipulative dandy (he questions Hamilton's morals - even as he's producing children by his slave and mistress Sally Hemings). Hypocritical much? This is a Thomas Jefferson they didn't talk about at UVa.

Not that Hamilton is presented as perfect - he was wildly ambitious. And hot-tempered and could have used a filter, big time. But he came to this country as an orphan, with nothing. He was "young, scrappy and hungry" and had to work his way to the top. He didn't inherit a fortune like Jefferson or Madison.

In the musical, George Washington tells Hamilton, "History has its eyes on you." And he's right. But we have to keep our eyes on history, too. Who we are, where we're from. I'd be proud and honored to be related to Alexander Hamilton - he's what this country is about. An immigrant who finds success. The quintessential American.

So, meaning no disrespect to Nicholas and Nathaniel Mills (and I'm happy to be their descendant), I'm hoping for a genetic dollop of Alexander Hamilton. What are the chances? Well, we share the same name. And initials.

Time to go back to Ancestry.com. Finding a connection to Alexander Hamilton will probably be easier than finding tickets to the show. Unless... once I can prove we're related, maybe I can use that to my advantage. Hamilton's relatives must have some pull.

Look for me in front of the Richard Rodgers Theatre - I'll be holding a sign, "Scrappy and hungry, possible genetic connection to Alexander Hamilton, need 2 orchestra tickets." Please?