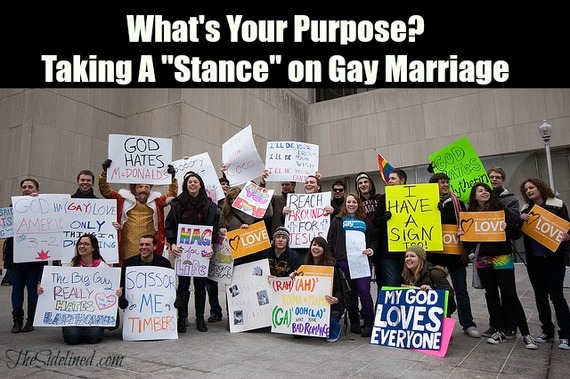 The power of the word "But."

You're beautiful BUT...you're a bit on the heavy side.

I feel bad for her parents BUT...it's their fault, she shouldn't have been hooked on drugs.

We like to act as if we have compassion then we follow up with this tiny, three letter word that erases all that compassion, because what you really want to say comes after the "but" not before. The before is just to soften the harsh blow.

So my question is, where has our compassion gone?

Why are we so concerned with being right or taking a stance/position that we forget to be compassionate and instead focus solely on being right?

There has been a lot of big topics in the news lately; topics that you're either on one side of or the other. Powerful topics that challenge religion, equality, and freedom. I'm going to focus on the one that keeps annoyingly filling up my newsfeed...gay marriage.

I'm not going to tell you my position because...

1) Frankly, it's none of your damn business.

2) Taking a position is unproductive to my beliefs.

3) Who the fuck cares what I believe?

I will however go into more about #2...taking a position.

I'm a Christian, and as a Christian I am expected to walk a certain path. The Bible is the guide to walking that path and based upon certain readings of the scripture in the Bible, men with men and women with women are not the way God intended. So because of that, many Christians have publicly taken a strong stance against gay marriage. Which is their God given right to do, and thanks to our service men and women who have sacrificed their lives for this great nation, they are entitled to voice that right. Again, this is fine. Annoying, but fine.

Here's where I see the problem with that, as well as a few questions that I think need to be addressed...
•What is your purpose as a Christian, for speaking out on this issue and making your position publicly known?
•What are you accomplishing?
•How are you serving God with your position?

1. What is your purpose as a Christian, for speaking out on this issue and making your position publicly known?

If I am guessing then I would say that your purpose for speaking out on the issue is to speak proudly as a Christian. It is to make known what is right in the eyes of the Lord and to stand proudly for the Word of God. And again, I love that we have the freedom to do so, and that you are not afraid to stand up for the Word of God and proclaim your status as a Christian regardless of the backlashing. I do however, question your motives.

Even more so, the "sanctity" of YOUR marriage is not determined by someone else's marriage. It is determined by your choice to allow God into your marriage or not. Nothing more, nothing less. The gay couple in California will not lessen the "sanctity" of my marriage when they choose to take their vows. The only one who has the power to do that is my spouse and me.

Then I've heard the argument that marriage was founded based on religion and it should remain that way. The problem with that argument is that I never see any public positions when an atheist man and woman are married. Their marriage obviously has nothing to do with religion, but more so based on love, like, a green card, government benefits, or who the hell knows what it's based on. So why isn't my newsfeed blowing up when atheist get married?

The confusion lies with the inconsistency. Taking a stance on a position when it is convenient. I've seen so many statuses speaking on the opposition of gay marriage, but I never see anyone post about their siblings or friends getting divorced or putting their marriage on blast. Maybe because it's so common now, and we tend to look the other way, but I can honestly say I've never seen a status like this... 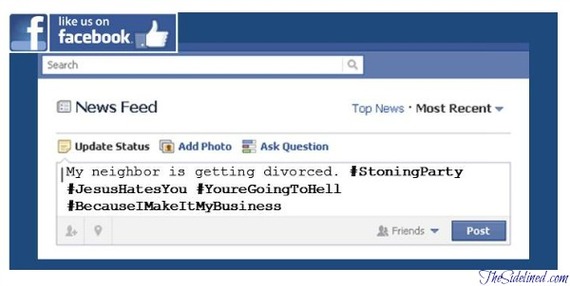 2. What are you accomplishing?

If you believe that you are accomplishing spreading the Word of God and making known your devotion, and your opinion about what marriage should be, then yes...you accomplished that. We know that YOU are a "Christian" and how YOU feel about what marriage is and should be. But taking a public position on a hot topic is really about YOU and less about God.

So if we post about our position over and over again on Facebook, Twitter, Instagram or whatever social media site you enjoy, then we will have done our duty of spreading God's Word and making our proclamation/stance as a Christian known. #IHopeJesusFollowsMeOnTwitter #BrowniePoints #IAmGoingToHeavenBitches

What you may not be aware of and what we as Christians should be letting you know instead is that... Jesus loves you! He just does. There's no conditions to that either. He loves you no matter what. His love doesn't come with the word "but". I've never once read in the Bible that...

Jesus loves you BUT...you're fat. (Obviously from eating too much bacon)

Jesus loves you BUT...you worked on Sunday (FYI (based on this logic)...all NFL players are going to hell)

Jesus loves you BUT...you didn't marry your sister-in-law after your brother died. 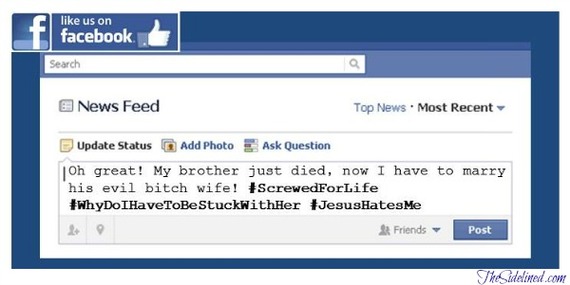 BUT you see where I'm going with this. We focus so much on what comes after the "but" and less so on what's before it, which leads me to #3

***This is not meant to downplay, degrade or make fun of the Bible, it's meant to wake your dumbass up. The Bible is the best guide to life there ever was, is, or ever will be. It's also unfortunately misinterpreted in some pretty disgusting ways. Let it be YOUR guide in YOUR walk with Christ and don't use it to push others away, use it to draw them near.

3. How are you serving God with YOUR position?

So now that you've made it known that you are against gay marriage, what have you accomplished?

Did you bring anyone closer to God?

Did you let them know how much Jesus loves them?

How did you serve God with YOUR position?

Who did you help today?

I'm glad that you're happy with yourself and that you can defend your position over and over again by reciting scripture after scripture in support of your position, but how are you serving God?

I know that it feels good to be "right", but does it feel good to push people further and further away from God? Does it encourage young people, old people, gay people, straight people, conflicted people; people that need the Word of God the most to enter YOUR church on Sunday and hear the good Word?

Probably not...but you know what you did accomplish?

YOU made someone feel ashamed, judged, rejected, resentful and conflicted about God. YOU made those who thought about looking to Jesus for answers...run in the other direction. While YOU made it YOUR mission to state how important YOUR position and the position of God is; YOU failed to do the most important mission you could ever have as a Christian.

YOU failed to spread God's love. YOU failed to bring people to Jesus. YOU FAILED! But at least everyone knows where YOU stand on the issue, because that, YOU accomplished.

His love is accepting, without prejudice, without condition, all encompassing, and the only stance you will ever need to take. And it's guaranteed that if you spread his love, then you will not only accomplish all you could ever dream of; you will also help someone else do the same. So I challenge you to no longer push people away from God, and instead draw them closer by simply just spreading His love. 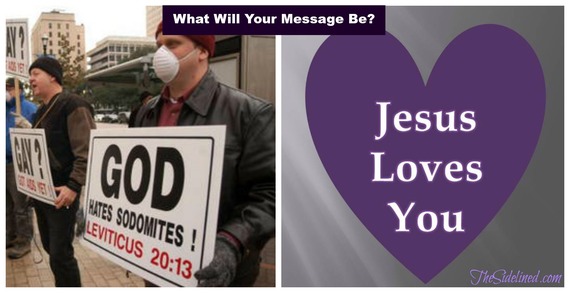