For the past six years, Cassie McLelland has been dressing her son's wheelchair in clever Halloween costumes, like Batman and his Batmobile or Superman flying through the clouds. She wants everyone to know that even though 9-year-old Caleb's spina bifida limits his mobility, it's just a small part of his and his family's story. 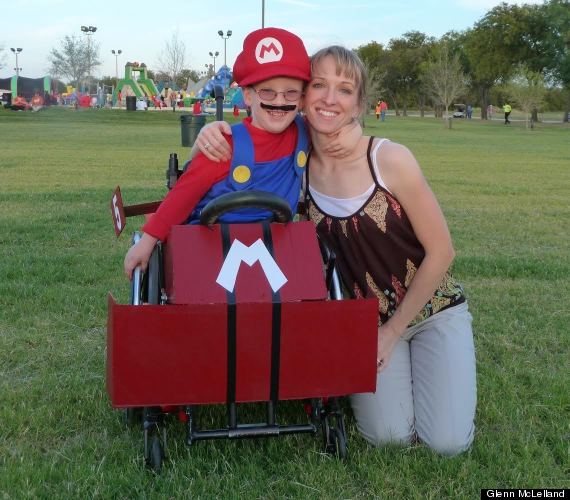 October is National Spina Bifida Awareness Month, and in the hopes of giving everyone a glimpse into the life of a family raising a child with the birth defect, Cassie McLelland spoke with The Huffington Post about the challenges they face.

"My goal this month (and all the time really) is to show people what SB looks like. It looks like Caleb," McLelland said via email. "It looks like the countless other kids and adults living full lives every day."

McLelland said she was 18 weeks pregnant when doctors told her her son had spina bifida and would have "no real quality of life." But, she says, the opposite happened.

"The picture painted for us that day was grim and terrifying," she wrote to HuffPost. "Our faith gave us hope even when the doctors did not. If I had just known how amazing Caleb would be, I wouldn't have been so scared. That's the message I would want to share with anyone facing this same situation."

She started dressing up Caleb's wheelchair for Halloween when he was just 3 years old. As he got older, he started collaborating with her on costume ideas.

"I know they look elaborate but honestly my only tools are a hot glue gun and some cardboard. Anyone can do it and many do. I see more and more wheelchair costumes every single year. It's wonderful," she told HuffPost.

She also said that by raising Caleb she's learned that she's capable of more than she ever thought possible.

"I've witnessed my child overcome some pretty big obstacles, and always with a smile. I get to be a part of his milestones, his achievements, his victories. That's a beautiful thing that I am so thankful to be a part of," she said.

Her main hope is that others can look past Caleb's wheels and see him for the fun-loving boy he truly is.

"I want people to see Caleb, not just the wheelchair or the leg braces, but Caleb. He is very much a 9-year-old boy in and out. He is active, smart, funny, and terribly handsome," she said. "I want people to know that Caleb is so much more than his diagnoses. I want people to see that a wheelchair is not something that he is 'bound' to or 'confined' to, it's his freedom. Mobility is a beautiful thing. That boy is living life and I'm just along for the ride. And it's been a pretty good ride so far."

Check out some of their awesome Halloween collaborations below: