By Charlie Wood and Josh Creaser

At 12:15 on Wednesday, December 2, the main foyer of Australia's Parliament House looked as it did on any other day -- a few tourists taking selfies, a school group heading off on a tour. By 12:16, 300 people from across the country calmly filtered into the space and sat down in the largest act of peaceful civil disobedience to take place inside the House. We were there to hold the People's Parliament. 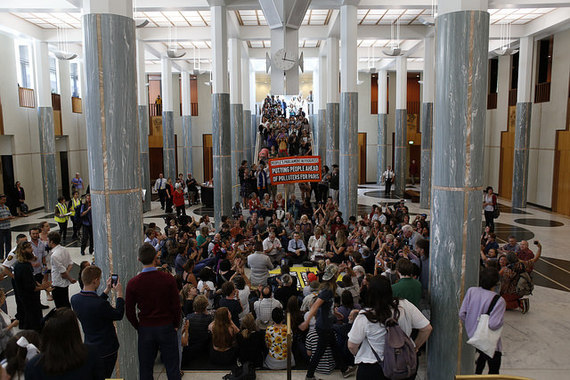 Our message was simple: if we want a safe future, we must put people ahead of the big polluters. A sign of the growing power of the climate justice and fossil fuel resistance movement, the People's Parliament was diverse, its impact was deep and its legacy will be lasting. Rather than standing outside the halls of power, hundreds of us took our concerns to the heart of Australia's political system - a system that has put the big polluters ahead of the Australian people for far too long.

The People's Parliament included Aboriginal elders, parents and grandparents from coal and gas impacted communities, Pacific Islanders, faith leaders, teachers, scientists and young people. For over an hour, we sat in the foyer of our Parliament and listened to the stories of these people - people who are fighting the worst impacts of fossil fuel expansion and climate change, people who too often are under-represented or not represented at all within Australia's political life. 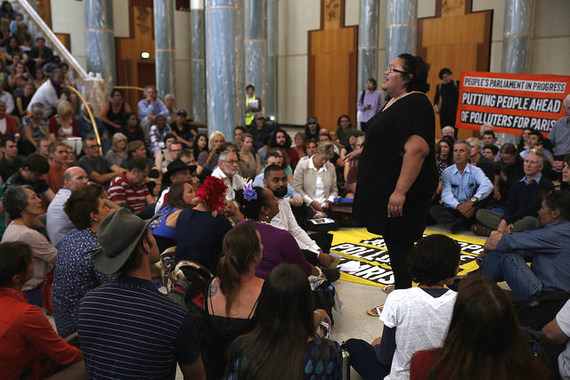 For a short time, the People's house lived up to its name. Gone was the bickering, the point-scoring and time-wasting. Instead, everydat people had the floor to voice their hopes and fears, to respectfully demand that our politicians do what they were elected for - serve the people and not the big polluters who are wrecking our climate and communities.

And then, one by one, we were dragged out of the People's Parliament. Islanders, priests, farmers, students, war veterans, dragged out of the House that is meant to serve them. The last woman standing was Aunty Mabel - a Bailai elder from the Gladstone Region. Sitting upon the marble steps, she cried out to security guards - "what right do you have to remove me from my land, what right?" Indeed, what kind of society are we living in when the voices of our traditional elders, our young people, our Pacific neighbours are allowed to be drowned out by the interests of a rich, powerful and polluting few? 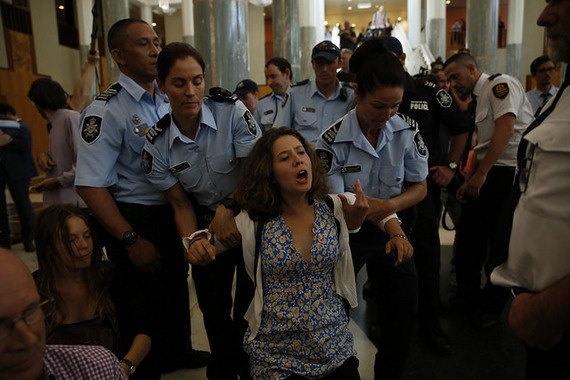 The People's Parliament brought these injustices to light in a way that cannot be ignored. It exemplified a new form of people-powered resistance that politicians ignore at their peril. For too long, our movement has been shut out from political decision-making. We have protested in our allotted spaces, followed approved channels, expected our leaders would one day lead. But all of that is changing. Our movement is taking matters into its own hands. We are becoming more diverse, more influential, and most importantly, we are unrelenting.

Diverse. the weekend before the People's Parliament, 150,000 Australians took part in the People's Climate Marches - the largest climate demonstrations in Australia's history. People from all walks of life participated - unionists, faith leaders, workers, business people, Aboriginal and Torres Strait Islanders and many others. The People's Parliament was equally diverse. Rather than a handful of paid activists, it comprised hundreds of people who had never participated in civil disobedience before. Artists, mothers, war veterans, health professionals. Even Senators sat down with us. This unlikely and broad alliance is proof that climate action and keeping fossil fuels in the ground are fast becoming issues which cross the political divide, which will shift votes at the ballot box and drive people to take action now and in the years to come.

Influential. For years, climate protesters have been ignored by those in power. We have danced, marched, picketed and bird-dogged. We have made seconds of airtime but at best have been on the peripheries. But this is changing. The People's Climate Marches made national and international media headlines. Then three days later, news of the People's Parliament spread like wildfire. Every mainstream TV outlet rushed to cover it, the hashtag was soon trending on twitter. ABC and SKY News beamed live footage into every MPs office in Parliament. Within minutes, articles were up in the conservative press, quoting directly from participants and linking to campaign websites. Even friends in Tehran and Europe saw our faces on the television. Parliamentarians came down to show their support. Staffers were moved to tears. The People's Parliament was a show of faith in what our Parliament could and should be. When you speak truth to power, people pay attention.

Unrelenting. Although the People's Parliament held the People's House for just over an hour, its impacts will run far deeper and longer than that. What we did in that marble foyer was the beginning of something big. As we turned our backs on the Parliament after we were dragged out, there was a palpable sense that each of us was ready to do so much more. Farmers, priests, teachers, parents spoke of their determination to take further action in their communities to make climate and fossil fuels the issues that define who gets to lead our country. And they weren't talking about marching and letter writing, but taking time off work and study, overcoming personal obstacles, even getting arrested if they had to. 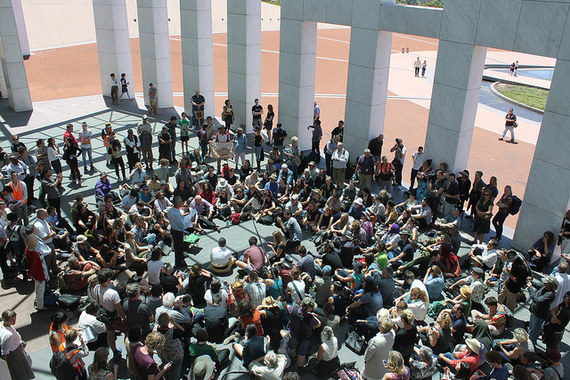 Throughout history, when our leaders have failed to lead, ordinary people have stood up to do extraordinary things. The People's Parliament was a beautiful demonstration of what we're capable of as a movement, a taste of the peaceful resistance our leaders will continue to face if they keep putting the people they were elected to serve second to the big polluters. 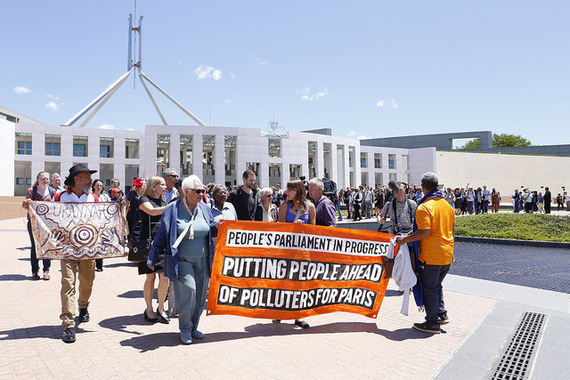