Valentina is 12 years old. She has the body of a 12 year-old girl. She is blond, caucasian and acts like a 12 year-old girl. Valentina was chosen to participate Brazil's version of the reality show "MasterChef Junior," along with several other children, both boys and girls. Valentina has been widely discussed, but not for her talent in the kitchen. Men started talking about how they could rape the young girl; an incident that makes it necessary to talk about rape culture.

(It is important to note that even if Valentina's physical features were different, everything described below would still be wrong and terrible.)

Let's call things as they are. We are not talking about pedophilia here, which is a disorder that can be treated before the person commits a crime - - be it the consumption of child pornography or committing rape. The men who posted comments about the "MasterChef Junior" contestant are not sick -- they just feel entitled to spout nonsense because they look at her and see a woman, not a child. 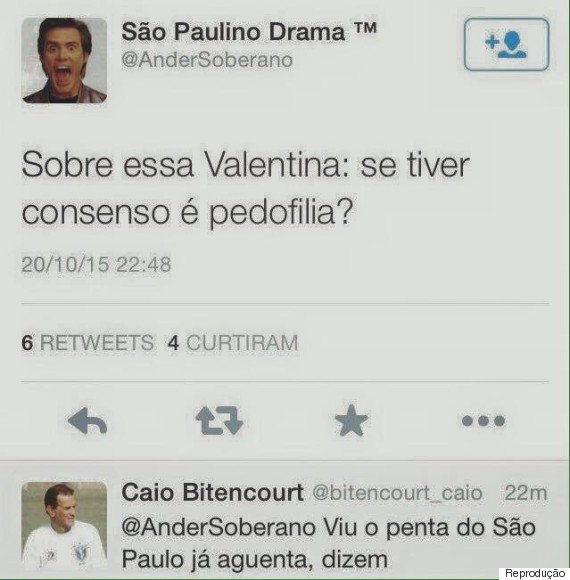 @AnderSoberano: About this Valentina: is it pedophilia if it is consensual?


We've been trying to discuss this issue for a long time. When the word "novinha" (young girl) was the most frequently searched term on pornographic websites in Brazil, many people said it was just a synonym for nymphet, trying to minimize the problem without realizing that they were condoning a crime.

But the problem is not restricted to pornography. Younger girls often play the role of adults in hyper-sexualized advertising campaigns. Women undergo vaginal rejuvenation procedures in an attempt to restore their virginity. Adult women are infantilized -- how often have you used "girl" instead of "woman" to refer to a woman? And the notion that just because a girl dresses up as a woman she can be treated as a woman is becoming more and more popular. And the list goes on.

Day after day, our society continues to make women more vulnerable. And sex is the fastest way to achieve that. Girls are encouraged to have relationships with older men, because, it is said, they are mature for their age. Women get pregnant: socially, they take full responsibility for the baby. Abortion is illegal in Brazil -- even though it occurs in massive numbers across all social classes and regions. Older men know how to convince girls to do what they want. Adolescent mothers quit school, don't attend college, and settle for underemployment because they need to support their children. Additionally, women who were victims of rape culture as young girls are considered sluts.

The myth that girls mature faster than boys, and therefore must have relationships with older men, may be the oldest one in the book; it is responsible for creating a sense of male impunity, made clear in posts about Valentina, for instance. 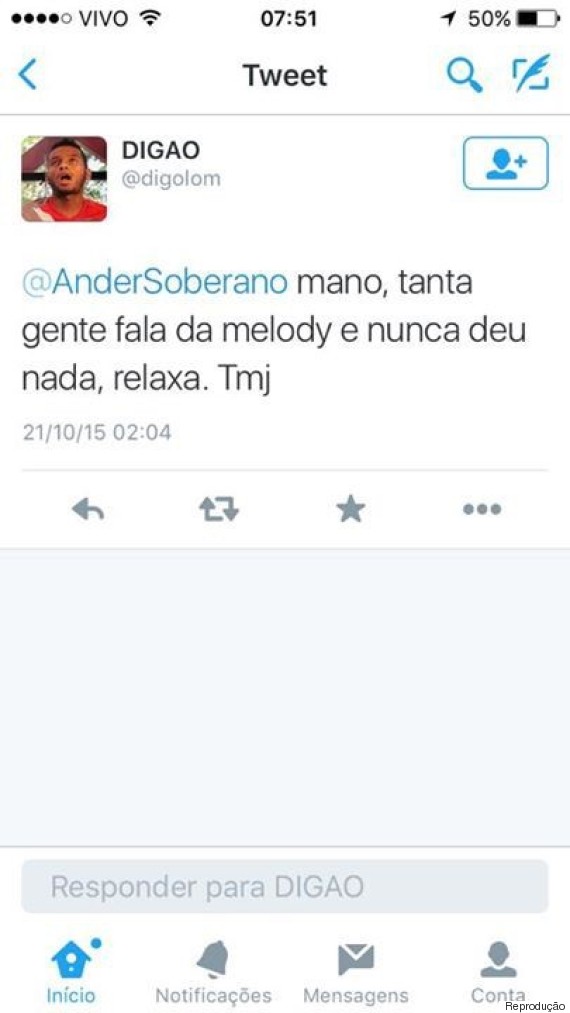 @AnderSoberano bro, so many people talk about "melody" [a teenager model on a recent TV show] and nothing happened, relax. Tmj [an abbreviation for we are together]


It is important to clarify that girls don't necessarily mature faster than boys for biological reasons, but because they can be given more responsibilities earlier. They are often in charge of domestic chores, they take care of their younger brothers, they cook, they go to the market and they play the role of the mother. In some cultures, 12 year-old-girls quit school to take care of their families, while boys have normal childhoods.

All these obligations and responsibilities, together with the fact that girls learn at an early age to deal with adult men's advances, make them more mature. It is a social construction.

While girls are led to premature maturity, boys and men are forgiven for all their errors because they are just boys, regardless of their age -- this is more frequent among white men of a certain socioeconomic position. Black or underprivileged men and boys are always regarded with suspicion, and some flawed theories indicate that their wrongdoings have a biological cause.

Combine all that with the idea that all women are sluts, especially those who don't conform to the standards expected by men -- since there is no consensus about the behavior of a non-slut. When the woman is pretty, the problem is even bigger: she is seen as stupid, she is objectified, stereotyped and deprived from saying no. The price for that is being accused of being stuck up or arrogant. No matter what a woman does: just arouse a man's desire, and you're considered a slut. 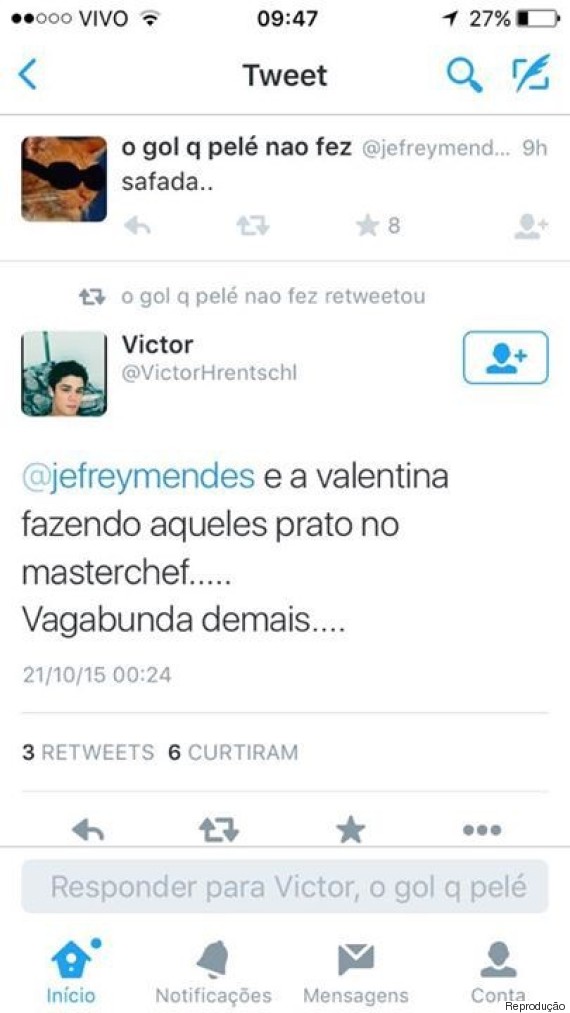 
Desire is the responsibility of those who feel it, not those who arouse it. When an adult feels desire for a child, he is to blame for violating a social norm that protects the childhood, the integrity and the body of a minor (according to the law). It is very simple, though, to reverse this reasoning and say that a girl already has the sexuality of a woman, that a girl wears provocative clothes, and that she is seeking masculine attention. Therefore, the man becomes the victim of a "home wrecker" who still plays with her dolls, whose sexuality is very different from that of an adult woman's. 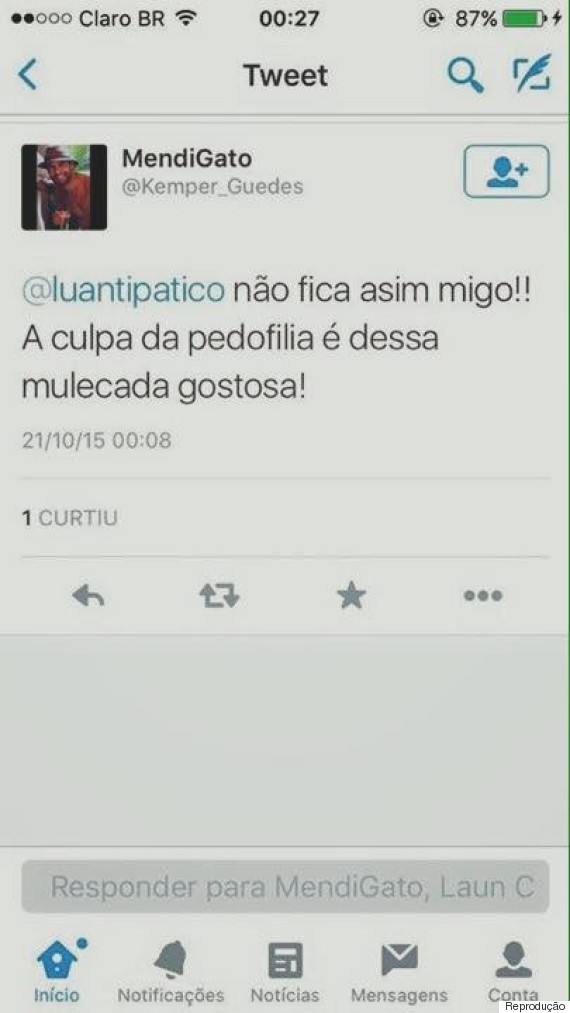 @luantipatico relax my friend!! These hot chicks should be blamed for pedophilia!


It is important to talk about rape culture. It is often between the lines of many narratives. It walks side by side with the notion that men are unable to control their instincts. It is closely connected to the false idea that a child can give consent. It is reinforced by the infantilization of adult women. Impunity and blaming the victim are the main weapons.

Children -- regardless of whether they have the skills of an adult (such as cooking), or if they have a fully developed body, or if they dress in provocative clothes, or if they are mature -- are just children. And any non-fraternal approach to them is a crime. They are not to blame.

What should Valentina do? Give up the dream of becoming a chef? Hide behind masculine clothes? Find ways to be less attractive? These are solutions we, as adult women, resort to our entire lives, but we don't want to offer them to the girls. They deserve better.

Special thanks to Ju Freitas who shared the Twitter screenshots.