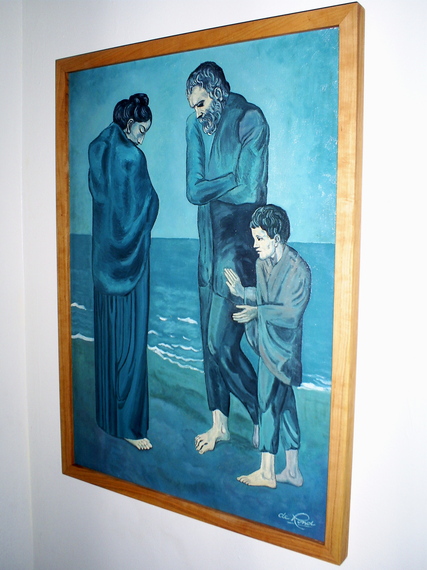 In the late '80s, AIDS was mentioned daily in the news, and misinformation and fear were widespread. I wondered how I could keep my young sons safe. So I volunteered as a Community AIDS Educator. I made my sons watch the training videos with me, and our living room became a sex-ed learning center for the curious adolescents in our neighborhood. My favorite video was the one where Reuben Blades explained safe sex by putting a condom on a banana.

I eventually gave many AIDS talks but never in a school, which was my original goal. AIDS Educators weren't allowed in schools because we might say the word "condom" in front of teenagers. I call this kind of thinking poverty consciousness. It includes making fear-based decisions while believing that it demonstrates responsibility and results in security.

When I spoke to groups, no-shows and walkouts were normal. Big audiences meant that management had required staff attendance. Once a community college class decided to boycott me because I wanted to bring along an HIV-infected person, even though the CDC had begun stressing that HIV was not airborne-spread. I went alone and brought a recording of my friend explaining his thoughts and feelings about being ostracized. Some students cried, and others hung on to their fixed ideas. Of course, no one can prove what a person chooses not to believe.

I also volunteered as an AIDS Buddy to people infected with HIV. One day, my supervisor called to ask if I would be the Buddy of Chris, a young man in the final stage of AIDS, already in the hospital, about to slip into a coma. When I arrived, Chris lay in the bed, emaciated, with KS lesions on his face and arms. And his devastated parents sat nearby. I felt inadequate, so I just sat on the edge of the bed, held his hand, and began to introduce myself. His expression calmed -- perhaps he just thought, "Oh good, finally someone to help my parents." I returned each of three days, until Chris died. And his mom asked me to be at his funeral. She said it had comforted her -- that I'd been willing to hold her son's hand and talk kindly to him. What did I learn? We should never underestimate our positive impact, even when we don't know what we're doing.

I also co-facilitated a wellness group for PLWAs (Persons Living With AIDS). One afternoon, I went crab fishing with some of the guys from the group. Each of us stood in the surf, with a chicken neck on the end of a string. The plan was to wait for a crab to latch onto the chicken and then jerk the string hard enough to toss the crab up on dry sand, and then catch it with a bushel basket. As we were waiting for the action to begin, one by one, each of the guys handed me his string and disappeared. There I was alone in the surf, holding a half-dozen stringed chicken necks. The guys had gone off down the beach following a good-looking guy. Ha! It was refreshing, and I liked it a lot!

My most challenging Buddy was a single woman with two young sons. My role was to help her make phone calls to get the help she needed. I found it difficult, not only because it was challenging to observe her with her sons while knowing what was coming in their near future, but also because she was very angry. At first, she even seemed to resent me. And I thought that we weren't a good match because I was healthy with happy sons back home. The days I visited her were the nights I cried myself to sleep. Over time, she opened up more. And I realized that her anger made her life more bearable than her depression did -- because the anger gave her back some of the power that the depression took away -- and she could function more easily. Either way, my only option was to keep caring, which meant not believing in her facade. Not believing in people's facades means never labeling them as unkind, unworthy, unfriendly, shy, bitter, mean, inadequate, sensitive, weak, etc. It means caring less about what they do and more about why they do it.

In the beginning, my son said to me, "Don't bring anyone home," afraid that his friends would find out. But it wasn't long before we all fell in love with my first AIDS Buddy, and he visited our home often and became our good friend. At his memorial service, people stood one at a time to describe how he'd been the first person with AIDS to greet them at the agency, or the first person with AIDS to teach them about strength and compassion. I stood and said that he'd been the first gay man with AIDS that I'd felt attracted to. Everyone laughed. And later, each guy came to me and wanted to know if he'd been the second -- because we're all just looking for acceptance and love.

If you didn't live it, it's difficult to grasp how terrifying the '80s were. Testing positive was a death sentence. Today, the CDC estimates that 1.2 million people in the United States are living with HIV -- and nearly one in seven of those are unaware that they're infected. And approximately 50,000 Americans become newly infected each year.

Back in the '80s, I had what I thought was a brilliant idea. Fortunes, like those found in fortune cookies, incorporated into condom wrappers! Imagine a responsible couple having a good laugh and keeping it positive while they open the wrapper and read an upbeat prediction for their future. I'm thinking that it could still happen -- because safe sex will always be important.