First question: "If everyone in this room was a potential investor in Greece, would you be able to assure them that, for the next four years, their investments would be safe, and that the country would be stable?"

Second question: "If I were having dinner with people who love Greece and who were looking to invest there, where would you want me to ask them to invest? Do you have a wish list?"

Third question: "If I am able to convince some people to invest in the energy sector, so that you are able to have greater energy independence, and so that jobs can be created, can I assure them that they are welcome and that they would get their money back? Can I tell them that you have the situation under control, and that the government will remain in power for the next four years?"

The man asking the questions was Bill Clinton. The man who had to answer them was Alexis Tsipras.

The place: The Sheraton Hotel, New York, Sunday afternoon, at the Clinton Global Initiative's 10th annual meeting. As if anyone needed confirmation that, almost 20 years after he last ran for office, Clinton remains the most charismatic figure in American politics, able to gather together Hollywood stars (I saw Charlize Theron in person, and she is even more beautiful than on screen), a Nobel Laureate in economics, world leaders, and human rights and environmental activists at the snap of his fingers. In this year's meeting, one session was specifically devoted to Greece. Gianna Angelopoulos, a member of the Foundation, arranged it. Angelopoulos introduced Tsipras, with the warmest of words: "Alexis Tsipras," she said, "has come, bringing with him the heart and hopes of the Greek people." 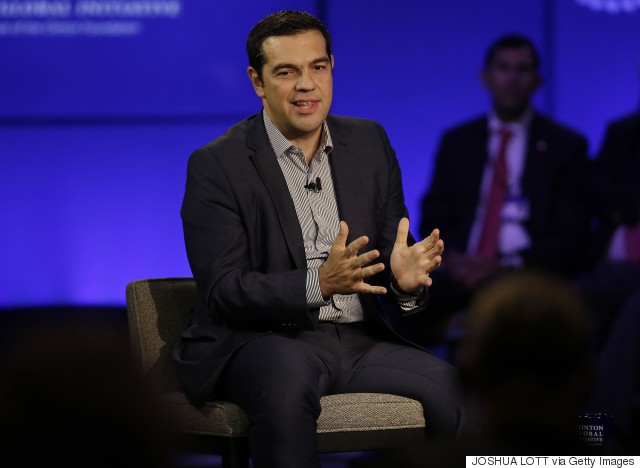 In general, the atmosphere couldn't have been more amicable for the Greek prime minister. A few minutes earlier, Joe Stiglitz had criticized Germany's obsession with austerity, accusing it of destroying Europe at large as well as Greece. George Soros, who was in the audience, took the floor immediately afterwards, and had an interesting dialogue with Italian Prime Minister Renzi, hammering a few more nails into the coffin of the "theology of austerity" destroying the European vision. And Clinton himself made it clear that he considers austerity to be a mistake, and that he believes Greece is entitled to an opportunity to grow.

The atmosphere was decidedly pro-Greek and unequivocally anti-German. It started off with a debate between Louka Katseli and Joe Stiglitz, where the Nobel Laureate predicted the failure of the new memorandum, and the head of the National Bank of Greece defended the agreement as "difficult but manageable." Katseli said that the dramatic "regime change" that had occurred in Greece was grounds for optimism. "Most of the parties in Parliament support the agreement, and the government has enough of a majority to implement it and make the long overdue changes," he said.

The evening ended with an even more interesting debate between Matteo Renzi and George Soros, with the mega investor maintaining that Europe is falling apart, and the charming and charismatic Italian prime minister defending the miracle of Europe, despite its difficulties. Both men ended up agreeing that Europe needs a vision, and not just rules, growth and not just austerity, and that loan spreads cannot reign supreme.

In between these two debates, Alexis Tsipras, with a friendly and protective Bill Clinton at his side, appeared on stage. 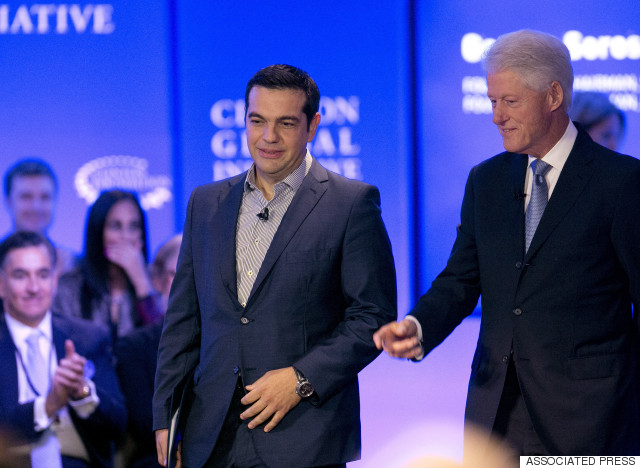 Alexis Tsipras delivered the following message: we will continue the struggle to correct Europe's path, to put forth an agenda for growth instead of austerity. We will implement the agreement, and we will fight to change the country, through tax reform, a change in public administration, meritocracy, attracting foreign investment, and fighting political clientelism. It was as if George Papandreou, who was in the audience as well, was listening words he had said five years earlier. And everyone was pleased.

Things started to get difficult when Clinton asked some questions: Will you make it through the end of your four-year term? Can you guarantee political stability? Where exactly do you need investment? How quickly will you implement reforms? Will you guarantee that investors won't lose their money?

It was clear that Tsipras did not have answers prepared, and he was not willing to improvise, especially not in English. But he had a message that he wanted to convey: "Foreign investors are welcome, and they will find a government with a clear mandate to bring about change to the country." He also said: "In a few years, Greece will become a prime destination for foreign investment, this is my opinion and my desire."

It was clear that Alexis is trying to learn the language they speak in the "Big Apple."

This post first appeared on HuffPost Greece and was translated into English.