For Los Angeles, there'll never been an Oscar weekend like the one that took place in 1942 - the year a flying saucer nearly crashed the party.

This week marks the anniversary of The Battle of Los Angeles, also known as The Great LA Air Raid, one of the most mysterious incidents of World War II - and one of America's biggest UFO sightings, taking place a full five years before Roswell.

It's a story I couldn't resist turning into a new sci-fi short film called UFO Diary, which debuted this week on Vimeo to mark today's anniversary of The Battle of Los Angeles.

So what makes the Battle of LA so famous?

In the early morning hours of February 25th, 1942, wartime Los Angeles flew into a panic as an ominous, saucer-like object flew over the city, touching off a massive anti-aircraft barrage. Despite the intense barrage, however, no aircraft wreckage was ever recovered - sparking one of America's first major UFO controversies.

Indeed, once the smoke had cleared, no one really knew what had been seen in the sky or on radar. Conflicting accounts of the incident from the War and Navy Departments didn't help matters - leading to accusations of a cover-up.

As if to confirm public fears of extraterrestrial attack, a notorious LA Times photograph (see below) emerged from the incident showing a saucer-like object hovering over the city. It's one of the eeriest images in UFO history. 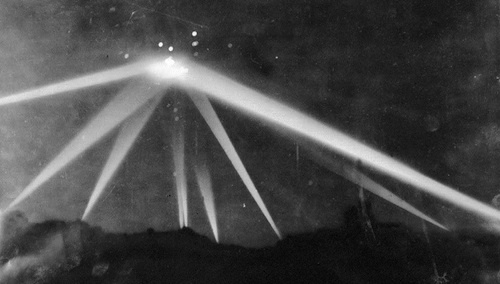 Over 100,000 Angelenos witnessed the incident, yet reports on what people saw that night varied - from Japanese aircraft, to a blimp, to stray American fighter planes, to a "lighted kite." One eyewitness even described seeing an enormous flying "lozenge," while an LA Times reporter claimed to have seen slow-moving "objects in the sky ... caught in the center of the lights like the hub of a bicycle wheel surrounded by gleaming spokes."

We still don't really know what people were seeing that night, because the government has never provided us with an adequate explanation for the incident. Probably because they themselves still don't know.

Since making UFO Diary, I've been asked by UFO enthusiasts what I think was really hovering in LA's skies that night. The answer is that I don't know - although I doubt it was a lozenge. Nor do I suspect that Orson Welles or Howard Hughes were involved. There have been a variety of competing explanations of what happened - most centering around weather balloons and barrage balloons - but none of them makes complete sense. The truth is that we may never know.

That's why, with the help of VFX veterans from ILM and Weta Digital, we decided in UFO Diary to depict the incident as an encounter with the unknown.

The characters in UFO Diary - two rambunctious members of the Women's Army Corps, played by Govindini Murty (who also produced the film) and Rachel Newell -
investigate mysterious lights at a remote coastal bunker, where they have an up-close encounter with a UFO. After photographing the invader, POV/found footage-style, they find themselves caught up in the historic LA air raid - of which they become the unlikely heroines. 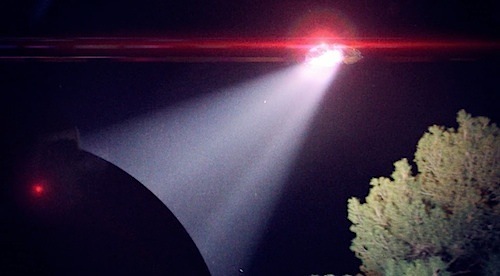 Much effort was made by our team to replicate the look of the UFO in the famous LA Times photograph - while giving it modern touches. I had the pleasure of working on this with VFX artists like Kiel Figgins (Avengers: Age of Ultron), Sean Dollins (Prometheus), Rini Sugianto (The Hobbit), Antony Vannapho (The Twilight Saga), Delano Athias (Deadpool), Bren Wilson (Paradise Lost) and other talented professionals.

To create the found-footage effect, we also worked hard to re-create the look of 16mm Kodachrome film from that era, while Emmy Award-winner Mitch Danton helped edit together the air raid sequence. You can read about how we put it all together at American Cinematographer.

As for the real Battle of Los Angeles, Angelenos eventually calmed down, and the Oscars proceeded the next day - with John Ford's reassuring How Green Was My Valley taking home five Academy Awards. Still, no one knows for sure what flew over Los Angeles that night and evaded the city's air defenses. 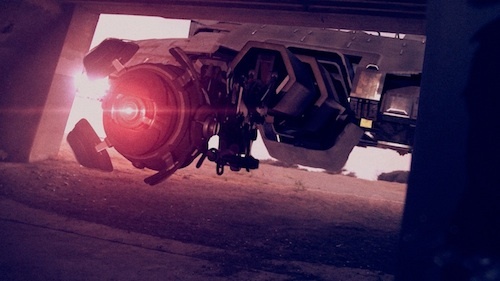 Indeed, the Great LA Air Raid remains a mystery to this day - and ultimately, each of us has to decide how much mystery we're willing to accept in our lives. Personally, I'm accepting a lot more than I used to. And although I'm still undecided on the UFO question, it's inconceivable to me that we are alone in the universe.

For me, UFO encounters represent valid engagements with things beyond our experience - and as such, they're humbling. "I know that I know nothing," as Socrates reportedly said nearly 2500 years ago. This was the source of the great philosopher's wisdom - and we'd do well to follow his example.

I hope you enjoy the film.

Jason Apuzzo is a Folio Eddie Award-winning writer and filmmaker.