When I lost my mom to Alzheimer's disease, one of the things I vowed was that I wouldn't wait to fulfill my "bucket list" items. At the moment, I'm spending the summer with my family in New York City, where we're seeing as many Broadway shows as we can -- checking off another item on that bucket list. Seeing yet another Tony Award-winning show was part of our itinerary this week.

I'd heard that the play was full of humor, that it cast a spotlight on family dynamics and sometimes the darkness that lies beneath, that it was earning rave reviews and had a stellar cast. What I did not know was that the play features a grandmother with a dementia-related illness. I don't think one character in the play ever uttered the word "Alzheimer's," but I know Alzheimer's when I see it.

One actress in the production was not only playing the role of the beloved family matriarch, she was also accurately portraying every bit of the last six months of my mom's life. Each behavioral detail was spot-on, right down to the words she repeated over and over. It was eerie how much she looked and sounded like Mom. While my fellow audience members were no doubt taking in the play as a whole and watching the other characters, I couldn't take my eyes off of this woman.

Towards the end of the play, the character has a violent outburst. That explosive behavior was the most striking similarity in the show to my own experience. In my mind, the woman onstage was no longer a character in a play. She became my mother, Fran Nicholson. 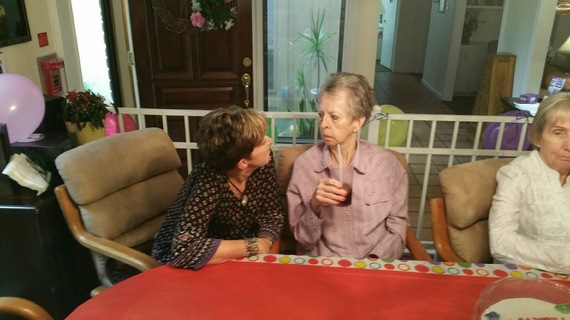 That's because much to my dismay, Mom became increasingly physically aggressive in the last year of her life, culminating in a very violent outburst directed at me. But as I learned later, I was far from alone in experiencing this type of frightening, upsetting behavior.

Anger and aggression among Alzheimer's patients

Among the many difficult behaviors Alzheimer's caregivers must cope with, verbal and physical aggression may be one of the most upsetting. Aggressive behavior isn't uncommon among dementia patients. Geriatric psychiatrist Dr. Gary Moak, author of Beat Depression to Stay Healthier and Live Longer, says verbal and physical aggression affects as many as 90 percent of people with dementia at some point during the course of the illness.

"When surroundings and situations that should be familiar instead feel strange and bewildering, people with dementia may become emotionally overwhelmed, and they may lose control," Moak says. "They may not understand that their caregivers are trying to help them, instead reacting as if they are under attack."

During that time, her mother suffered from a psychotic break that included paranoia and delusions, she says. She would throw punches at fellow residents in her assisted living facility and at one point was ejected from a hospital for threatening staff and other patients with knives, Lawrence recalls.

As with my own mother, the behavior was all the more shocking because it was completely out-of-character.

"It was a big surprise for me because my mom was a very demure lady throughout her life," Lawrence says.

Experts say common triggers for physical aggression in those with dementia include fear, confusion and an inability to communicate verbally, leading to frustration and anger. Some aggression may be the result of other medical problems, such as poorly managed diabetes or urinary tract infections, Moak notes.

This was often the case for Lawrence's mother, who would lash out physically when she was experiencing discomfort, especially in the form of a urinary tract infection.

"A lot of times when someone has dementia, when they can't articulate what they want, it makes them angry - so they're going to express their discomfort and anger in the ways they can, which a lot of times is physical violence," she explains.

Moak notes that any change in routine can trigger disturbed behavior in dementia patients, including violence. Difficulty with mundane processes that no longer make sense can also prompt a feeling of a loss of control, which then leads to aggression.

"Television programs that the person with dementia cannot understand, kitchen appliances they no longer know how to work, or family conversations they are unable to follow, also can lead to trouble," Moak explains.

Likewise, if the person with dementia senses that someone around them is anxious, tense or irritable, it can also trigger aggression, he says.

Understanding what triggers your loved one's outbursts can help you react appropriately and possibly prevent physical aggression. For example, Lawrence and staff at her mother's assisted living facility noticed that her mother tended to lash out at one particular resident in the community - so the staff ensured they remained separated and her mother's behavior improved, she says

How to respond to physical aggression

When your loved one with dementia does lash out physically, there are a number of things you can do to help keep you both safe. Dr. Moak recommends the following when a violent outburst due to dementia occurs.

According to Moak, the best treatment for aggressive behavior may be in the caregiver's hands, as they can make changes to their own style and behavior that make for a less stressful environment for their loved one.

"This involves adopting a calm, lighthearted demeanor, learning to adjust style of interacting with the demented person, and learning specific behavioral approaches for troublesome behavior," he says.

During the play the other night, my 16-year-old son kept reaching out and touching my hand -- he was worried for me. When the show was over, he asked with such concern in his voice, "Are you OK?"

I actually felt fine, but what surprised me was how some of our neighboring audience members turned around and looked at us with somber, knowing smiles -- as if they'd been through this experience themselves and needed someone to check if they were OK, too.

I'm fairly certain at some point in the next few weeks I will walk past the theater where we watched the play on my way to another show and will absolutely lose it. If I do, just ask if I'm OK. Sometimes I still believe Mom attacked me because I didn't handle this journey correctly for her.

Dayna Steele is the creator of the 101 Ways to Rock Your World book series and a popular keynote speaker with her true Rockstar Stories. She is also working to bring Alzheimer's awareness to all ages. www.daynasteele.com