The tiny coastal burg of Bolinas, CA, has a reputation for reclusiveness. For years, road signs marking the turnoff from California State Route One, the winding coastal road that stretches from Dana Point to Leggett, have been purposefully removed to discourage tourists. It also has a reputation as a sort of hideout for writers, poets, musicians, and visual artists of all kinds. And it has some of the best surf north of the Golden Gate. So it's not surprising that just about every concrete or wood surface is also a canvas for graffiti art, including the seawalls designed to prevent erosion and keep cliff-top residences from toppling into the waves. 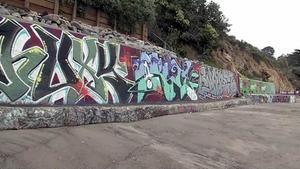 Now that same graffiti art, considered vandalism by some local residents if not the law, has been identified as an environmental hazard as the layers of paint crack, flake, and wash into the ocean. According to the National Oceanic and Atmospheric Administration (NOAA) huge quantities of paint chips and other man-made debris floating at sea, hundreds and even thousands of miles from land, may be working their way into the American diet. But is a possible health threat, coupled with threats of arrest, fines, and jail time serious enough to stop the painters (AKA "writers" in graffiti-speak)?

Much of what the layperson calls graffiti is "tagging," which consists of a hastily sprayed personal logo or signature that marks territory, not unlike WWII's ubiquitous "Kilroy was here" campaign. Such tags are often covered by "throwups," a quick signature or personal message that includes filled-in shapes and/or bubble letters. Both "tags" and "throwups" can be covered with more complicated multi-colored artwork without starting a "beef" between artists. Then along come the "buffers," usually city or county workers armed with rollers and latex and charged with covering all the graffiti with a layer of fresh paint. And then the process begins anew.

According to the graffiti and street artists, the spray paint itself is unlikely to flake or chip, even when multiple layers have built up over time. But once the latex is rolled on, the spray paint binds to it, so when the latex cracks and peels as expected, the layers behind it come along for the ride. 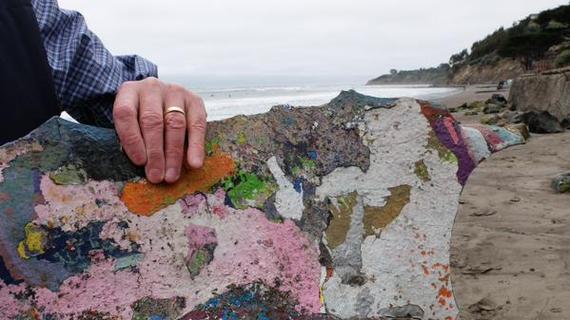 "It's going to get picked up on the food chain at the bottom, the plants and all the microorganisms. Once it gets in the food chain and it will be in the food chain forever," says a local veterinarian said during a recent ABC News report. One exacerbating factor is the existing presence of small plastic bits, including pellets often referred to as nurdles, which form the raw materials of many plastic products of all types worldwide. Nurdles are essentially toxic sponges, and exist in the oceans (and on beaches) in uncountable numbers thanks to shipping spills, accidental releases at factories and a variety of other hazards. Any toxins released by paint chips are likely to be absorbed by these nurdles, which, according to NOAA have already been found in small fish, plankton, shellfish and sea birds. And though the state of California has banned such plastics from commercial products, the damage has already been done. It's only a matter of time until toxic nurdles find their way into our seafood dinners.

Whether such concerns will have an effect on the Bolinas seawalls remains to be seen. Historically the Bolinas community has encouraged all forms of artistic expression, and is one of the few places where street and graffiti artists have been welcome to paint on public structures, including the seawalls. Some of the murals and other public art installations have been part of the Bolinas townscape for over 30 years. As one local surfer put it, "Bolinas is getting overrun by the Mill Valley people who don't like the edgy side of town." Yet even though Mill Valley, Sausalito and other uber-expensive Marin towns are only 40 minutes away, Bolinas remains a world of its own. When the marine layer of fog and low clouds settles in for the summer, weeks may pass without sunshine, making the colorful seaside murals a welcome respite from endless days of gray.

Of course Bolinas isn't the only town with painted seawalls. The Galveston Seawall, which depicts sea life painted by schoolchildren, is a Texas tourist attraction. Since it has never been buffed or painted over with latex, there is little concern for its effect on the coastal environment.

The Surfrider Foundation, an international organization dedicated to protecting public beaches, has successfully prevented the building of new seawalls on many beaches, preferring instead to support the re-location buildings that are threatened by erosion, leaving the ocean and it's beaches to the forces of nature. (An inquiry regarding the Bolinas controversy directed to the chairman of the local chapter of the Surfrider Foundation was not returned.) It is highly unlikely that the many houses that dot the cliffs of Bolinas will be relocated any time soon, paint chips notwithstanding.

"Trying to crack down on the artists will only make buffing more acceptable, which will only result in more paint chips," said the local surfer. Graffiti is also ensconced in the social culture of surfers and skateboarders alike, who are apt to point out that paint chips are a minuscule nuisance when compared with the abuse regularly ladled into the ocean by oil companies and other industries. As for beachgoers who claim to love art "but don't wish to see it when they go to the beach," seawall-free Stinson Beach is right across the narrow shark-infested channel to Bolinas Lagoon.