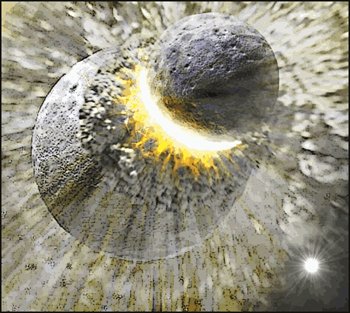 Two publishing industry titans smashed into each other last week, and it couldn't have come sooner.

Basically, Random House has been screwing authors by assuming ebook rights they were never contractually awarded--because ebooks hadn't been invented in contracts negotiated fifteen-plus years ago. It's the equivalent of a horse and buggy salesman assuming a Ford dealership for free. Also, Random House has dictated a 25% author royalty rate for ebooks, even though the Authors Guild says "knowledgeable authors and agents...are well aware that e-book royalty rates of 25% of net proceeds are exceedingly low and contrary to the long-standing practice of authors and publishers to, effectively, split evenly the net proceeds of book sales."

Andrew Wylie's a literary agent representing some of the biggest names in publishing--Salman Rushdie, Martin Amis, the estate of Norman Mailer, etc. He's now screwing Random House by going around them to sell his clients' ebooks straight to the public via Amazon. In a bit of asshole oneupsmanship, Random House responded by announcing they won't cut any deals with the Wylie Agency until this spat is resolved.

Both parties are behaving like assholes here. Fortunately, one of the assholes is on my side (I'm an author - turns out the Author's Guild agrees with me). And that, unfortunately, is exactly what's needed.

Let's get to the essence: Random House essentially stole rights here. They're enormous, and they can get away with things, so they tried to. They pissed off a lot of authors, and some of the biggest authors have channeled their anger through one really powerful author representative, Wylie, to fight back.

I'm reminded of one of my previous careers working with a trial consultancy, where I helped run mock trials and pick juries for plaintiffs and defendants. After spending time with lawyers on both sides, I learned that few plaintiffs really want to file a lawsuit--it's a huge time and money suck, and there's a good chance they'll lose. Even if they win, companies will stonewall and appeal for years before they see a dime. Usually, it's not worth it.

But when people really get screwed, they don't have any other recourse. Cigarette companies lied about health effects for years, and millions died; only lawsuits forced compensation and change. McDonalds used to make coffee that regularly sent people to the hospital for burns; the only way to get them to change was a $2 million verdict.

What I'm saying is, to get an asshole to change behavior, you need your own asshole to force it into being. Asshole logic is the only thing that works. Andrew Wylie is a vicious negotiator, with a terrific nickname to match: "The Jackal." He also understands that readers don't care if they're buying books from Random House or Simon & Schuster or the Crackhead Publishing Company--all they care about is the book. He knows the market. He wins his battles. He has a battering ram of power-authors on his side. He is the Chosen Asshole.

That said, one of my great joys in publishing a novel has been the degree of cordiality and friendliness native to the publishing industry. People who work in publishing genuinely love books and stories and writing--not the battles or egos or reputations. I'm a pretty unknown author, but most everyone I've worked with has been respectful and thoughtful with me, if not downright enthusiastic. It's a seismic change from other industries I've worked in (law, tech, Hollywood), and extraordinarily refreshing.

We're losing some of that decency in this collision, and that is a shame.