When the current crop of presidential candidates speak of aliens, they are not referring to those living on other planets. There are no off-Earth colonists and no anchor babies on Mars - yet.

But with multiple Martian missions in the works, some involving human explorers, perhaps we should take the temperature of those seeking this nation's highest office. Who's supporting planetary exploration? Who, if elected president, will push hardest for current and future NASA missions to Mars and other deep-space destinations? 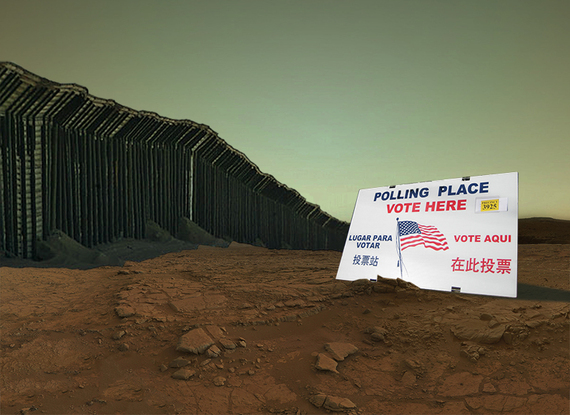 It's an important question - every four or eight years (depending on whether a president wins a second term), it seems NASA must not only endure a budget-wrenching re-examination of national priorities in space, but must also face the fact that each new president has an opportunity to direct our national space program - or to re-direct it if the new commander in chief disagrees with the direction set by his predecessor.

Bush Sr.'s 1989 Space Exploration Initiative called for a new space station, a permanent base on the moon and eventually a human mission to Mars, but Clinton replaced this plan with his 1992 policy focusing on "faster, better, cheaper" robotic space exploration - with no humans allowed beyond Earth orbit.

Bush Jr.'s 2004 Vision for Space Exploration re-visited Bush Sr.'s three-step human space exploration of Earth (via the ISS), the moon and Mars, but Obama cancelled this program in 2010, replacing it with plans for a new heavy-lift rocket, the Space Launch System, and plans to use it to land humans on an asteroid.

According to NASA's historical assessment about the recurring presidential re-invention of the space exploration wheel:

"Today it is difficult to maintain momentum for any governmental program, it seems, beyond a single presidential election."

But today is where we are - facing a new election and a new president, and on the campaign trail, opinions are varied and offer no clear vision of how the next president will affect current and future NASA missions:

Federal funding for big-ticket space exploration - which peaked in Apollo era to a whopping 4.41% of the budget but now hovers around 0.5% - will always be problematic. There will always be pressing social issues that need to be addressed, and difficult choices to be made when allotting each federal dollar.

The Apollo program succeeded not just because the initial money was allotted, but because the necessary support continued beyond a particular administration. Coalitions involving the government, industry and higher education were built and maintained, budgetary lines were established, contracts were awarded and the work commenced.

The public enthusiasm also prevailed across multiple administrations, which turned out to be just long enough to get the job done.

There's no way to know now whether the prolific "vote-for-me" rhetoric that fills the airways today will ever translate into national policy, or whether the next president will continue current programs or may decide to re-invent NASA once again.

But if public opinion regarding human missions to Mars is currently experiencing an uptick, isn't this an ideal time to push the space agenda higher on the list of presidential talking points? Higher than the fence some want to build to keep aliens at bay, higher than any real or imagined boundary we may construct to once more thwart our national progress toward Mars and worlds beyond?