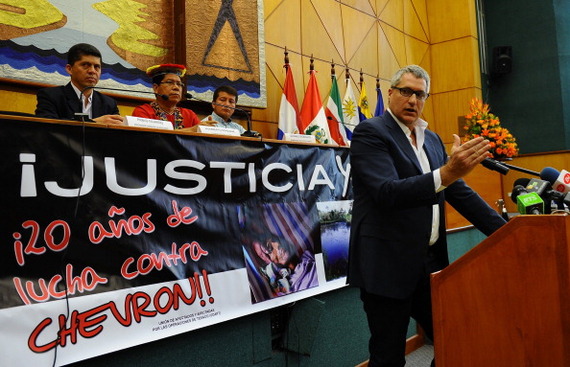 The lawyer of Ecuadorean people affected by Texaco-Chevron -who have long sought compensation for pollution between the 1970s and early 1990s- Steven Donziger, gestures during a press conference on March 19, 2014 in Quito. (Photo credit: RODRIGO BUENDIA/AFP/Getty Images)

In an unprecedented legal move, 17 U.S.-based civil society organizations -- among them Amnesty International, Amazon Watch, Rainforest Action Network, and Friends of the Earth -- have just filed an amicus brief in federal appeals court defending their First Amendment rights from attack by Chevron.

Let me back this story up by about 18 months.

In November 2012, Chevron subpoenaed me.

The subpoena server knocked on the front door of my home. He handed me the 40-page subpoena from Chevron's law firm, Gibson Dunn. I learned subsequently that my subpoena was one of several that Gibson Dunn served on not just non-profit advocacy organizations, but also Chevron's own shareholders, including Trillium Asset Management.

This subpoena was in connection with the anti-racketeering -- or RICO -- lawsuit brought by Chevron against the Ecuadoran villagers and their lawyers who successfully won a $9.5 billion judgment against Chevron for its oil pollution in the Ecuadoran Amazon. Chevron contends that the judgment was fraudulently obtained. Chevron has also implied -- falsely -- that my advocacy work and that of Amnesty International, Amazon Watch, Rainforest Action Network, and Trillium Asset Management -- on this issue is part of this supposed fraud.

Amnesty International USA has a long history of advocacy in support of the communities in Ecuador affected by Chevron's oil pollution. For instance, in April 2006, Amnesty International USA joined a delegation of concerned shareholders and activists at the Chevron Corporation annual stockholder meeting in Houston, Texas, to demand the company address its human rights responsibilities in Ecuador's Amazon and the Niger Delta. The delegation on Ecuador included Emergildo Criollo, a leader from the Cofan tribe in Ecuador.

For over a decade, Amnesty International USA has retained a small amount of Chevron stock in order to join with other shareholders in filing a resolution and speaking out at Chevron's annual shareholder meeting.

In my subpoena, Gibson Dunn demanded all of my documents and all of my emails concerning my shareholder advocacy work at Chevron. What was demanded of me was every detail of my communication with not only Chevron shareholders but also the press and government agencies, including the Securities and Exchange Commission (SEC).

Chevron also demanded all of my documents pertaining to my advocacy work as a member of the Business and Human Rights Group of Amnesty International USA. According to the subpoena, this included every document and emails connected with all of the following staff and members:

In essence, Chevron demanded extensive and intimate information on my First Amendment-protected rights to speak out regarding oil pollution in Ecuadoran communities. That included my efforts to organize Chevron shareholders and petition US government agencies both professionally and as a member leader of Amnesty International.

It's my opinion that Chevron did this to me -- Amnesty International, Amazon Watch, and Rainforest Action Network -- to harass and intimidate us for advocating for the people of Ecuadoran Amazon affected by the company's oil pollution.

Once I secured the services of EarthRights International as my pro-bono lawyer, I spoke out against Chevron's retaliatory legal tactics to the press. I went public deliberately to demonstrate to Chevron that I refused to be intimidated by them. That quickly led to articles in the New York Times and also Grist, which even published my entire subpoena.

I was determined to make Chevron's attempt to intimidate me backfire on the company. I reckon that I succeeded. The press articles exposed Chevron's bullying tactics. Moreover, one month after serving the subpoenas, shareholders of Chevron filed resolutions at the company on its liability in Ecuador in greater numbers than ever before. Amnesty International also once again used its stock holding in Chevron for this effort.

Amazon Watch has also continued its staunch advocacy on behalf of the communities in the Ecuadoran Amazon. In recent months, Amazon Watch has produced a series of humorous and enlightening cartoon videos about the case entitled "The Adventures of Donny Rico" available on their YouTube channel.

Chevron gained little to no information of value from its subpoenas. Amazon Watch and Rainforest Action Network had their subpoenas quashed. Thanks to the dogged work of my fine lawyers at EarthRights International, I have not to date been compelled to hand over any information to Chevron.

Nevertheless, the U.S. federal court judge Lewis Kaplan ruled in Chevron's favor. Both the Ecuadoran villagers and their lawyers have filed in U.S. federal appeals court to have Judge Kaplan's ruling overturned.

Amici Curiae ("Amici") are organizations dedicated to advancing environmental protection, human rights, corporate accountability, and economic justice. Amici regularly engage in First Amendment-protected activities similar to those that the district court found to be predicate acts under RICO. Amici bring, participate in, and support strategic litigation intended to help achieve important societal goals In conjunction with such litigation they seek to educate the public and to influence public opinion and government and corporate behavior through public relations campaigns, websites and blogs, press releases about ongoing litigation, corporate shareholder resolutions, public demonstrations, and letter-writing campaigns to government or corporate officials. If the district court's finding of a RICO violation based on just such activities is upheld, Amici's exercise of their First Amendment rights of free speech, association, and petitioning government will be severely chilled by the very real possibility that they will have to mount costly defenses to retaliatory litigation brought by deep-pocketed corporate defendants.

Under the regime augured by this case, other Amici may expect similar consequences as they pursue their organizational missions through constitutionally protected activities. Amici are also threatened by overreaching issuance of subpoenas that seek to compel those organizations to turn over internal planning and strategy documents and the identities of their supporters, thus exposing their supporters to further risks.

This is a critical case for advocates of all kinds. If corporations, such as Chevron, succeed in branding First Amendment activities of advocacy organizations as a conspiracy, then corporations will have secured another powerful cudgel with which to threaten and intimidate those who organize to seek redress for corporate abuses of human rights.

_________________
More on the authors: Simon Billenness is a member of Amnesty USA's Business & Human Rights Group, an expert group of volunteers who support the organization's work on corporate accountability for human rights abuses.

Paul Paz y Miño is a member of Amnesty International USA's Andean Country Specialist Group since 1995, in addition to his role as Director of Outreach and Online Strategy at Amazon Watch.