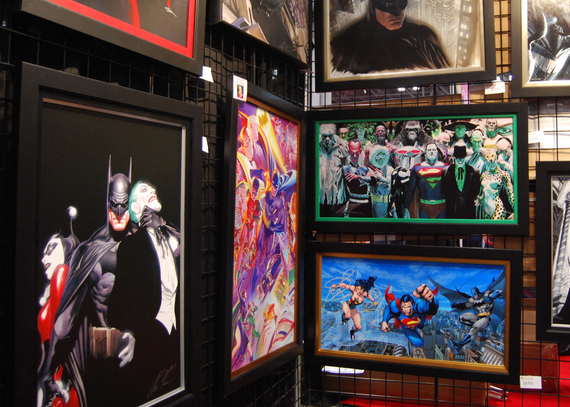 If you have an empty wall, chances are your first impulse is to hang up some artwork. Most people debate whether they want to go with a painting or photograph, usually of a well-known piece that's probably hanging in a museum. But lately, people are turning to something that reflects their pop culture interests, opting for art that depicts superheroes both well-known and obscure.

It's a trend that's reflective of our times. Gone are the days when one's comic book collection was the limit of expressing fandom, and when collectors were dismissed as mere nerds. Fandom is mainstream, whether you're looking to the success of the Nerdist sites and podcasts or to just how San Diego Comic Con has become one of the biggest media and entertainment events of the year. Even President Barack Obama is an admitted fan; his love of Spider-Man and Conan the Barbarian has been documented.

"We deal with everyone from your casual pop culture collector to die-hard fans with rooms dedicated to pop culture memorabilia," he added.

With the increased popularity of comic books, there has also been more interest in collecting original comic book art. A popular cover of "Amazing Spider-Man" #328 pitting the title character against the Hulk by Todd McFarlane fetched $657,250 at auction in 2012.

Although some people purchase as an investment, Berman feels that there is more to collecting comic art. "We like to believe buying art is a personal thing, something unique unto itself. We never pitch it as an investment -- to do so takes the customer out of the experience of the art itself."

Outside of comic art, there is an increased demand in movie and pop culture themed artwork. "The Peanuts movie generated a lot of excitement around our Peanuts original production art and fine art lines," said Berman. The company has seen more interest in their Star Wars prints as well.

With The Force Awakens debuting in a few weeks, there has been a strong demand for Star Wars memorabilia. Gallery 1988 recently held an exhibition and auction of original artwork inspired by the upcoming film. Japanese clothing designer and music producer Nogi is auctioning rare collection of Star Wars items, including vintage posters, packaging proofs and special edition action figures.