Weddings are personal, but the issue known as "same-sex marriage" is public. We have Mr. Conan O'Brien and TeamCoco to thank for bringing light to an important historical moment -- and to an unfair discrepancy between states. 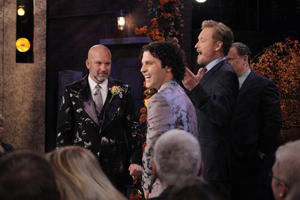 When we got engaged in August, we wanted to celebrate the most fabulous and undiscriminating basis of our lives together: love. But we never imagined the ceremony would take place at the Beacon Theater, be televised on TBS, or be officiated by Mr. Conan O'Brien.

As a gay couple, we live lives that are very much "out" and happily adjusted, evidenced by our family members and friends who joined us onstage during the ceremony. While we never sought permission to express ourselves, since June we have been excited by the recent legal advances in New York and wanted to participate civilly in a meaningful way. We could not deny the importance of visibility right now. We know we are only one couple, of so many more, mobilizing demands for marriage equality and queer rights.

We did not seek a political platform, and yet by painting our celebration as beautifully as they did, TeamCoco gave us the best possible opportunity to showcase that couples are couples. A same-sex couple anywhere should be legally permitted to declare the same commitment to one another as a heterosexual couple.

The show set up the most glorious celebration, while allowing the two of us to feel that the wedding was our own. Despite 3,000 people in the theater, and millions of viewers on TV and online, we were able to have a personal affair. We connected intimately as a public act; our planned-yet-unrehearsed vows underscored this excitement. 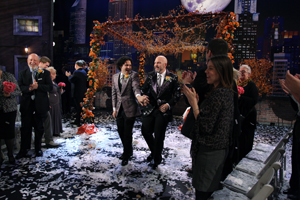 The work of the crew and production staff of Conan overwhelmed us; it was meticulous, above and beyond our only requests: a few words to one another, a symbolic chuppah (wedding canopy), and the breaking of glasses. The artistic response of the show to our wishes was glorious, as we have all seen in the hundreds of real flowers and fabulous tuxedo jackets, and, yes, in the attendance of Ted Turner (Will Forte). The standing ovation from the crowd knocked us over.

"Gay marriage" is a national issue -- and Conan offered us international exposure. Conan put on stage in one state a celebration of love outlawed in another state. Celebrating our wedding as not only dignified and legitimate but indeed a monumental occasion, Conan provided a mainstream endorsement, as Andy Cohen points out in his blog. Our wedding in this way participates in larger discussions about both the huge strides made throughout the country and the miles left to go federally.

After the broadcast, we hid out in Battery Park for a weekend honeymoon. We are planning a longer getaway up the coast of California next week. Still, in our state of residence, where we are celebrating, we cannot legally wed and are fighting for recognition of our nuptials in New York. We are fighting for rights and privileges in California afforded to all other married couples, regardless of where they marry in the U.S.

We hope that the fight ends soon, and that we're on the winning side. We are dressed for it.