What if a losing team could simply change the scoring system so it looked like it was winning? That's what Republicans in Congress recently decided to do after 35 years of pushing a losing policy of trickle-down economics. On the very first day that it took control of Congress, the new GOP majority in the House of Representatives changed the way the costs of tax cuts are estimated, making it easier to give even more tax breaks to corporations and the wealthy.

The move comes just in time for what is expected to be a major battle this year over how to reform the corporate tax system. Conservatives want to make deep cuts in corporate tax rates. But to slash rates without adding a trillion dollars to the deficit they will be forced to close massive tax loopholes that deepen the profits of their corporate benefactors. At least that's how the math looks according to the traditional way the non-partisan Congressional Budget Office (CBO) estimates the cost of new legislation.

Instead of opting for smaller cuts in corporate tax rates or for closing expensive tax loopholes to pay for them, Republicans decided to change the way the CBO keeps score. They instructed the CBO to assume that large tax cuts will boost the economy and eventually increase tax revenue. By this new scorekeeping method, it will be much easier to pass large corporate tax cuts while protecting corporate tax loopholes. They call this "dynamic" scoring, but it would be more accurate to call it "cooking the books."

The problem with this method of magical accounting is that large corporate tax cuts may not generate the billions of dollars in tax revenue that proponents claim. Truth is, that nobody knows--not even budget experts. A recent government analysis of a comprehensive Republican tax plan offered a range of possible impacts -- the biggest one was 14 times larger than the smallest one.

Although no one knows the exact economic effects of tax cuts, anyone with a passing knowledge of subtraction can tell you cutting taxes cuts revenue. And 35 years of history have borne out this simple fact. In the early 1980s, President Reagan secured the nation's biggest peacetime tax INCREASE in history because his massive tax cuts the previous year had blown a gaping hole in the federal budget. Today in Kansas, huge state tax cuts--after being sold as "paying for themselves"--have instead led to a budget crisis.

Rep. Paul Ryan, former vice presidential candidate and the new chairman of the House tax writing committee, wants to cut corporate tax rates by nearly one-third--even though many big profitable corporations, such as Boeing, General Electric and Verizon, go years without paying any federal income taxes at all. Ryan's corporate tax cut would cost $1.2 trillion over the next 10 years, according to the best, honest estimates of budget experts.

That's over a trillion dollars that wouldn't be available to build schools, fix roads, train workers, shore up Social Security and Medicare, or reduce our debt.

So instead of changing his policies to reflect reality and serve the interests of working families, Ryan helped change the budget scoring rules to reflect his ideology and serve his political funders in Corporate America.

Defenders of this cooking of the books claim the goal is to get more accurate information about the effects of government policy. But, significantly, under the new rules the budget analysts are not instructed to estimate the economic effects of government investments, like rebuilding roads and bridges, even though mainstream economists have determined that such spending boosts the economy a lot more than tax cuts.

For example, a dollar spent to rebuild the nation's crumbling infrastructure is five times more effective at boosting the economy than a dollar of corporate tax cuts. A dollar in food stamps provided to the poor is five times more impactful than capital- gains tax breaks, which largely go to the wealthy. See other examples in the table below. 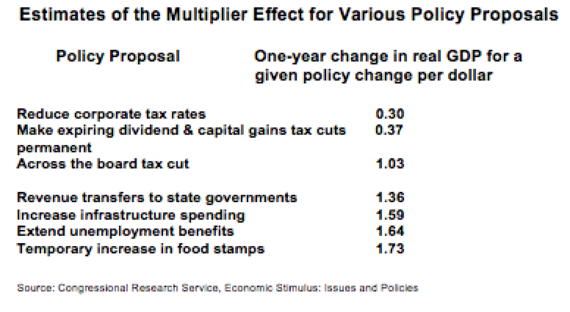 What will Republicans say if the corporate tax cuts don't produce billions in tax revenue and instead create a mountain of new federal debt? They will deny that the problem has anything to do with their phony math and will instead claim that excessive government spending is to blame. Then they will demand more cuts to services that support working families: less money for education, transportation, researching medical cures and more.

For conservatives, the plan will have worked perfectly. But for most Americans, it will be an unmitigated disaster. By cooking the books, the rest of us may get badly burned.

Take Action: Don't let them cook the books. Block "dynamic scoring."
This accounting trickery cannot be fully operational unless it is also adopted by the U.S. Senate.
Take action here to block it from happening.