We talk a lot about Customer Development, but there's nothing like seeing it in action to understand its power. Here's what happened when an extraordinary Digital Health team gained several critical insights about their business model. The first was reducing what they thought was a five-sided market to a simpler two-sided one.

But the big payoff came when their discussions with medical device customers revealed an entirely new way to think about pricing -- potentially tripling their revenue.

We're into week 9 of teaching a Lean LaunchPad class for Life Sciences and Health Care (therapeutics, diagnostics, devices and digital health) at UCSF teaching with a team of veteran venture capitalists. The class has talked to ~2,200 customers to date. (Our final - not to be missed - Lessons Learned presentations are coming up December 10th.)

Among the 28 startups in the Digital Health cohort is Tidepool. They began the class believing they were selling an open data and software platform for people with Type 1 Diabetes into a multi-sided market comprised of patients, providers, device makers, app builders and researchers.

The Tidepool team members are:

A Five-Sided Market
In Week 1 the Tidepool team diagramed its customer segment relationships like this: 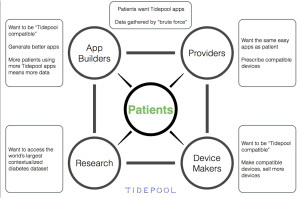 Using the business model canvas they started with their value proposition hypotheses, articulating the products and services they offered for each of the five customer segments. Then they summarized what they thought would be the gain creators and pain relievers for each of these segments. 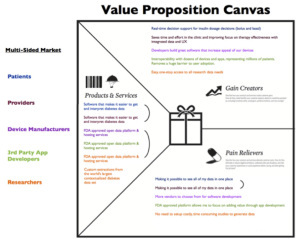 Next, they then did the same for the Customer Segment portion of the canvas. They listed the Customer Jobs to be done and the Pains and Gains they believed their Value Proposition would solve for each of their five customer segments. 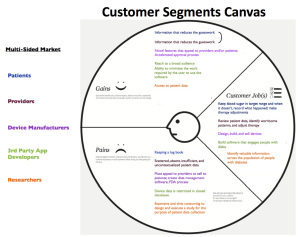 It's Much Simpler
Having a multisided market with five segments is a pretty complicated business model. In some industries such as medical devices its just a fact of life. But after talking to dozens of customers by week 3, Tidepool discovered that in fact they had a much simpler business model - it was a two-sided market. 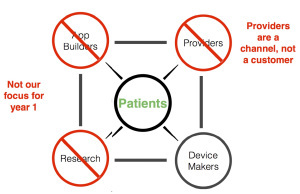 They discovered that the only thing that mattered in the first year or two of their business was building the patient-device maker relationship. Everything else was secondary. This dramatically simplified their value proposition and customer segment canvas.

So they came up with a New Week 3 Value Proposition Canvas: 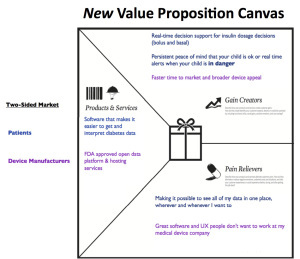 And that simplified their New Week 3 Customer Segment Canvas 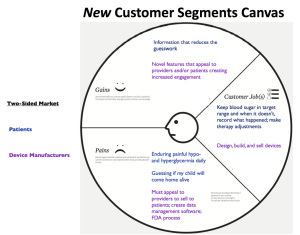 Cost-based Pricing versus Value-based Pricing
While simplifying their customer segments was a pretty big payoff for 3 weeks into the class, the best was yet to come.

As part of the revenue streams portion of the business model canvas, each team has to diagram the payment flows. 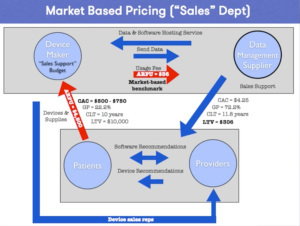 The Tidepool team originally believed they were going charge their device partners "market prices" for access to their platform. They estimated their Average Revenue per User (ARPU) would be about $36 per year. 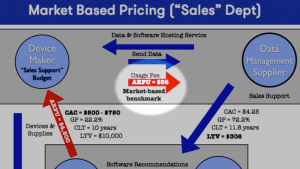 But by week 6 they had spoken to over 70 patients and device makers. And what they found raised their average revenue per user from $36 to $90. 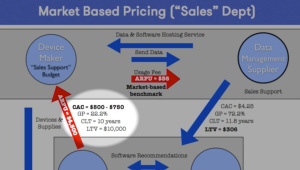 These customer conversations led the Tidepool team to further refine their understanding of the device makers' economics. They found out that the device makers sales and marketing teams were both spending money to acquire customers. ($500 per sales rep per device + $800 marketing discounts offered to competitors' customers.) 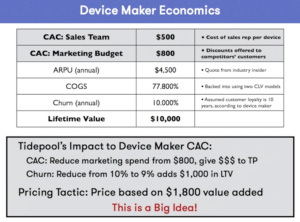 This meant that Tidepool could price their product based on the $1,800 they were going to save their medical device customers. Read the previous sentence again. This is a really big idea. 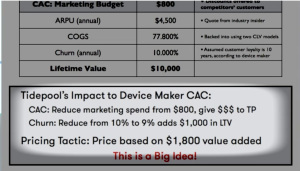 The Tidepool team went from cost-based pricing to value-based pricing. Raising their average revenue per user from $36 to $90. 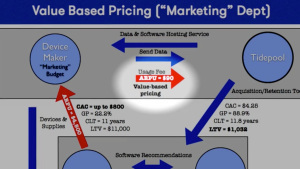 There is no possible way that any team, regardless of how smart they are could figure this out from inside their building.

If you want to understand how Customer Discovery works and what it can do in the hands of a smart team, watch the video below. The team ruthlessly dissects their learning and builds value-pricing from what they learned.

This short video is a classic in Customer Discovery.