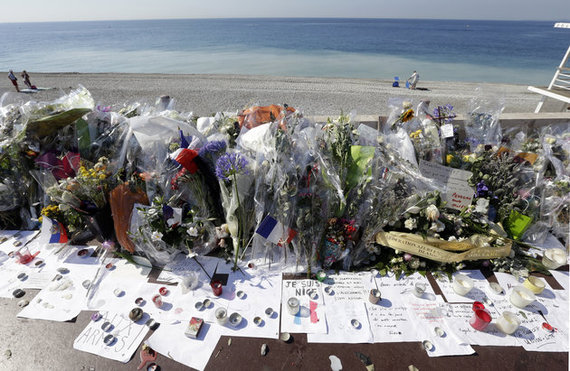 And then there are the deaths where you have no one to blame - car accidents, bike accidents, cancer. These deaths individually hit an emotionally heart string, but all together? All together a lot of us are left deflated. You start to think, why them and not me? Or worse yet, am I next?

You're encouraged to not take life for granted, and cherish every day with the ones you love. But that seems difficult to do when you wake up each day sentenced to a routine of 9 to 5. You start to really wonder why you're here. What's the point? What's our purpose? We're not just taking life for granted, we're taking lives for granted. Innocent people are dying to justify some undefined greater purpose, or they're dying simply because they drew the short end of the stick. These are things that you just can't make sense of.

It seems inevitable that it will happen again, and that it will be caught on video. Violence has become the norm. We grieve, we lay flowers on the spot where the dead have fallen, we protest, we demand justice. But the violence doesn't end.

These days I often think about our younger counterparts and what they must think of our world. Because they certainly can't find answers from their parents. Ultimately, we're all just scared. Scared of getting into a car, scared of traveling overseas, scared of the color of our skin, scared of the uniforms we wear. Whether we're proud of who or what we are or not, there's no cheating death. At this point, it's almost like we're chasing death. Is this really what life is all about? Being scared? And if so, then what are we doing here day in and day out? It seems all we're doing is talking and feeling. And if we're acting, they're not the right actions. This isn't a battle of survival of the fittest. But it is a battle for survival - and surviving the right way. And this constant state of mourning isn't what surviving should about.

It's not morbid, it's enough.

And unfortunately, there doesn't seem to be an end in sight. So what can we do? Hashtags, photos, songs, protests, and memorials seem routine and are losing their meaning. It's gotten to the point where it's another day, another loss. How can we come together and fight against death, rather than fighting against one another? There has to be a solution, I'm just not sure who is able to find it and make an impact. If I'm sure of anything, it's that this is a reality we cannot accept.