I think I am still trying to figure out why I hate being told that I am rude, or cocky, or extra. I guess I do not like those personality corrections, because it implies that my mother did not teach me how to "act properly." And she probably did not. My mother grew up being told a lot of "no's" - do not be too creative, do not be fresa*, do not be too feminine, no seas muy masculine. AKA: do not be to comfortable with yourself, do not feel too safe, do not love yourself, do not explore outsider the respectable gender binaries, etcetera. 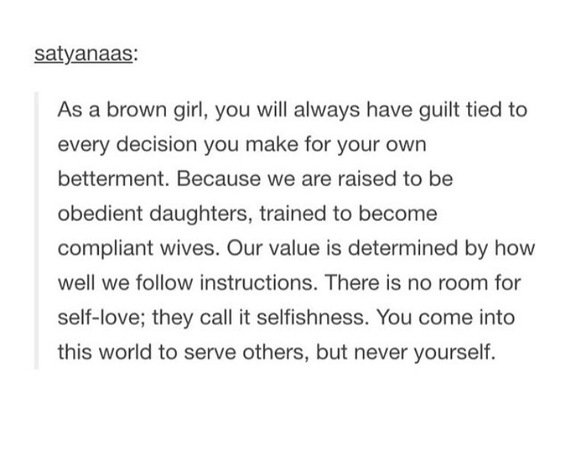 When people call me rude, for interrupting someone when they are speaking, being too loud in spaces that are deemed silent, or too visible in situations that require I disappear - I get upset. Especially when I get the "no's" from other POC* because who told you the "no's" before they could enjoy your body, develop your own personality, and discover your agency. Who told you that self-realization was taboo?

I get worried when words like: manners and politeness, become code for policing my behavior. I grow particularly anxious when good becomes a normative ethical definition when there is always context and intersectional realities to consider. Especially when we know that our brown and black family members are policed, because of their perceived badness, at staggering rates.

I am a niña buena among people from my block, but a scary/threatening in white spaces. We know this, yet we still police one another.

I get sick to my stomach when professionalism becomes a guise for what is expected for respectable human beings but seems to completely strip me of my identity.

Quite frankly, it is social control - horizontally and vertically. Meaning that not only do we tell one another to simmer down, we tell one another to control our egos, we mandate that we "act right." But also those with some semblance of power, like our bosses, landlords, professors, are also telling us what can and cannot be done.

I am still trying to figure out if I should be angry with my mother, who did not institutionalize me enough, or with you for trying so hard to do so.

* I do not italicize Spanish, because to italicize is accent the foreign language, and since Spanish is not foreign to me nor to the majority of my intended readers, I will not "other" what is familiar to us for grammatical points.
** People of Color