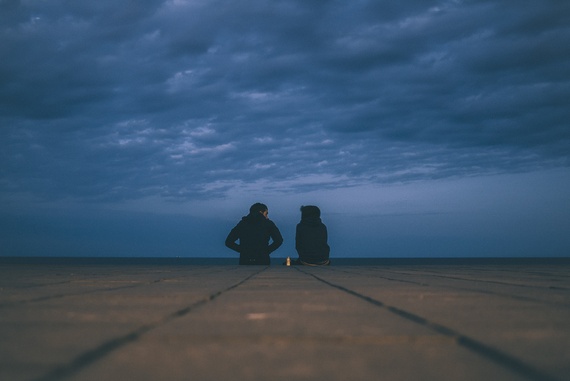 It's hard to watch or read the news these days. I can't tell if times are just exponentially worse than they once were or if all the horrible things that were always there are just being constantly thrown in my face every time I connect to WiFi. It's depressing, and I know I'm not the only one who feels this way. Still, I keep consuming, because no good will ever come from ignorance.

Social media, which started out innocently enough, has degraded into a platform where the haters, trolls, and "social justice warriors" creep for opportunities to take others down, deliberately finding reasons to be upset or angry over otherwise cute and uplifting videos. In every comment thread on a video with a precocious child, there's someone mad at the parents for raising a disrespectful kid. On every Dove ad celebrating the diversity of women's bodies, there's someone criticizing the overweight women for being lazy and lacking self control.

These aren't inherently bad things, though! In fact, these are things that help to progress thought, discussion, and enlightenment. But when we engage in these comment-section debates, we have to ask ourselves - "What's the goal?" What are we trying to accomplish by participating in, or even just reading, these threads?

I'll tell you one thing - the majority of people aren't trying to hear the other side.

Social media has given people a unique platform to say whatever they want and broadcast it to a worldwide audience with little to no consequence. They hardly have to take full responsibility for the things they say or the effects their words may have on people. They aren't required to prove their statements with citations and documentations, and they hide behind the protection that their freedom of speech grants them to name-call and spread divisiveness.

How easy is it to forget that the people you're interacting with on social media and in comment threads are actually people?

So back to my question - what's the goal? The goal is, unfortunately, to be heard and to be right.

People, who may or may not have an audience amongst their peers, have a guaranteed audience on the Internet. They can engage anyone in these so-called debates by being a bit outlandish and provocative. Spewing controversy is a great way to get some online attention, to be heard, to be noticed, and, I suppose, to feel good about yourself. You can "win" the debate by just declaring yourself the winner and your opposition an [insert random ad hominem attack]. You can walk away a victor and go on to tell your triumphant tale.

What a short-sighted plight.

Imagine the world we could create by using this platform we've been gifted to actually try to see the other side. In our lives, we tend to associate with those leading similar lives and holding similar beliefs. We're often not exposed to people of different backgrounds who hold conflicting opinions or values.

But online, the entire world is practically there in front of us. The worldwide web is full of content created by all kinds of people.

I believe, perhaps naively, that this culture of hate, offense, and self-righteousness that we've created could shift...and I'm not even the most optimistic person. There's growth to be had from considering someone else's position on a topic, and from understanding how little you know about the world, its issues, and its people. Instead of always needing to being right, there could be glory and reward in gaining a new perspective.

Freedom of speech is truly an incredible thing that we tend to take for granted. For those of us fortunate enough to have it, what are we going to do with it? The energy we put out into the world is ultimately the world that we have to live in. We're in this together, and I can't imagine that most of us want to live in a toxic environment.

For the first time ever, we have the tools to effect change on a global scale. Use your voice - but please, for all our sakes, keep your ears, your heart, and your mind open.

Blogger; passionate about humanity, the earth, and making a positive impact.