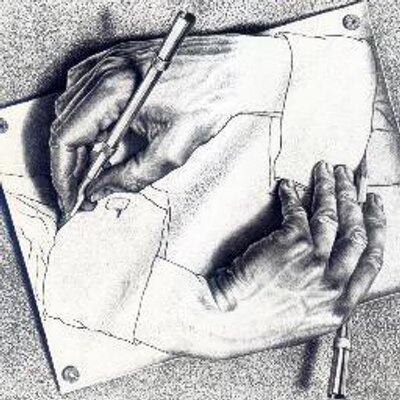 It's a question I'm asked all the time: At what point did you realize you wanted to be a writer? Was it after reading that great book in school? Did Mom or Dad push you into it? Or was it just something you fell into, because having a normal career didn't sound interesting and you realized you had a flair for words?

I've answered the question a million times, and it still confuses me. Truth is, I never discovered I "wanted" to be a writer in the same way that I never discovered I wanted to have four limbs, brown eyes, or food to eat. To invoke that perennial gay expression, I was born that way.

Being a writer is in my blood, like being gay or being white or having those brown eyes. There's nothing I can do about my DNA, and I have no plans to suppress the urge.

I can offer snippets of the desire, the longing, the need. I remember sitting at our kitchen table, I don't know how old I was, maybe six or seven, and writing out a science fiction story on paper napkins. I remember, too, a couple of years later, sitting at the edge of our suburban lawn on a summer day and imagining stories as cars drove by and kids played in sprinklers and neighbors mowed their lawns or made voices behind screen doors. Everything I saw had to be told, explained. There was no flashing light above my head, no epiphany, no beginning to this need -- it was there, always.

True artists are built with their expression intact, and we live in a world that doesn't necessarily reward the gene. If success hits, and hits often, then it's terrific and applause is proffered up. You are magnificent and so is your tenacity. If there are lows, if there is failure, if there is no work, the common reaction is "Give it up and get a real life, a real job. Hey, you gave it a shot." And if my gay marriage falls apart should I chose a woman, a traditional life instead?

Even in my least successful years, the ones where the only person to see my written words is the reflection on my computer screen, like an actor reciting monologues in the mirror, my self is not going to let the artist go. It couldn't even if I craved release from starving. I'm never going to give up my appetite for French Fries either, although my brain would make the adjustment if they were removed from my diet. Not so with creativity. The fuse would simply burn out.

These words are more relevant today than ever because I'm older, and the last couple of years have borne witness to my struggle as an artist in an unforgiving world. I've been "auditioning" and hearing variations of "you're not good enough" for longer than I've been dating. And the rejections are similar. They are still personal. If artists have big egos it's in part a survival mechanism. How else could we get up every morning and hear "no" one more time?

My pocketbook has, at times, witnessed the hardship of the path something -- God, genetics, nature's illumination -- chose for me. I'm witness to the good-sense travels of my friends, my age with their steady paychecks and security incisions and envious structured roots. I look at them and talk to them and find myself dreaming of that life, the one we're taught to reach. I'm often told they imagine an artist's life, and in our admiration of the other we are united.

Getting older also means witnessing more artists suppress their work, brilliant artists with talent like blood clots. Whether they've left their art out of fear, or the needs of family, or too much rejection and too little support, or just fatigue, they don't lose the craving, they just cover it up with material Band-Aids. There's sadness in their eyes, delusion, the look of people who've had everything in their homes sucked up by an un-forecasted storm. And they might be satisfied, comfortable, relieved, but they're missing a rib.

For me, it could get ugly, as it has in the past. The pressure of profit might shadow my days, might loom over me like the very real voices that tell me I should have become a professor or, back when I was acting, a theater instructor -- two careers I have enormous respect for and am uniquely unqualified to hold. I don't know how to teach and my contribution would be that of second-rate educator in despondent mourning. It could get flush too. I'm not a slave to suffering and I crave money like the rest of us.

As long as there is life there will be art, and, like any profession, it's unlikely there will ever be enough spots for all who excel. Since we live in a culture that increasingly rewards people on traits other than merit, the number of artists who benefit financially is likely to dwindle further. There are limited ways most of us can delay the process, let alone reverse it, but we do have the means to make the artist's life more emotionally fulfilling. Support your talented friends and relatives and rid yourself of any notion that it's a lifestyle or a choice. Honor their artistic ambitions the way they honor your pension plan.

People often say that artists who aren't selling need to grow up. When someone can explain to me how living each day without the guarantee you'll ever work again, or spending all your "free time" knocking down doors -- struggling artists don't have vacations or days off; they always work at work -- when someone can explain to me how living each day as a risk is not being an adult, is not brave, then perhaps I'll take that comment to heart. It would be just as simple to make the argument that "settling" is the equivalent of taking the easy, childish way out. Have some balls, you nine-to-fivers. Take a year off with no pay and write that Great American Novel or audition for that play.

I speak in metaphors because a writer's life is always doubling over into another dimension. Sometimes living in the real world is the escape. The reality is that I'm stuck in this world until I wither up and die with my words. So, to all my talented friends, in whatever form that takes, the next time someone asks you when you realized you wanted to become an artist, turn it around and ask them when they realized they didn't. That should be the beginning, and the end of the conversation.