"When do we vote?" Elizabeth "Libba" Grant must have asked this a dozen times over the past few weeks. She had been transferred to Palliative care and she knew better than anyone that the end was near. At eighty-one years of age she figured this was only fair, but she had some business to attend to before she took her leave.

Libba loved politics. She was a life long Democrat ... a yella dog through and through and she never missed a chance to participate. Libba had marched for Civil rights, fought for women's equality and rallied her fellow Southerners in support of many a worthy cause. She had always voted with pride and conviction, but she could never remember a time when she felt so urgent about it. Death would simply have to wait.

Hillary Clinton was her first choice so she did not mind telling you that she had her doubts about the new fellow. Funny name Barack Obama ...who names a child something like that? She was disappointed when he won. Like many women of a certain age, she was thrilled by the notion of seeing a female elected president in her lifetime. Hillary's defeat hurt her heart, but Libba was not one to hold a grudge and then her children thought the world of the fellow and that meant something. She decided she would hear him out.

When the Democratic Convention aired on television she sat up in her bed and watched night after night. What she saw moved her in ways she had not anticipated. It was quite a sight ... 100,000 Americans of every age race and creed gathered together for that great crazy spectacle of American democracy. Libba had seen her share of history in the making but this felt personal. This was the America she had always believed in and had worked so hard to bring about.

Michelle Obama was as smart as she was lovely and the little girls adorable and perfectly mannered. This spoke well for Obama, must be a feminist to have a family like that. The speeches were all great and the moment that Hillary handed over her delegates was so thrilling that Libba forgot to be sad about it. Joe Biden is everything she loves about a Democrat, scrappy and earnest and a little bit unpredictable, not a lock-stepper ... "good choice" she thought. Then, the new fellow Obama appeared at last before a hushed audience under the dark Denver sky. . She studied the crowd which was pin-drop quiet as he spoke of the challenges we face. She felt for the broad shouldered black men, whose eyes were wet with pride and smiled at the little old white ladies, their hands folded as if in prayer. She worried for the young people with the tattoos and the piercings, so hard looking until you peered into their wide innocent eyes.

Mr. Obama's words fell around them as thoughtful as they were heated as grounded as they were inspiring ... he seemed honest, a rare thing in a politician, but there was something more ... something she could not put her finger on. Then it hit her and she filled with feeling. "He is the future plain and simple" she thought and Libba understood that she would soon be the past. She would not live to see the first African American sworn into office, but he would win and by God she would have her say in the matter.

"When do we vote?" She asked it every day as time began calling her back into the Earth's embrace. "Soon Mama" you just hang in there and we will all vote together, is how her daughter Beth would answer, though she did not have much hope of it. Libba was fading fast now, her body breaking down her breathing more labored, even her speech was slurring. The nurses warned there was not much time, but the old activist was putting up her last good fight.

On Thursday the 9th of October Beth's husband Michael raced to the Care center with the week's mail. To everyone's great joy Libba's absentee ballot had arrived. Her eyes lit up when she was told, her head nodding slightly. She could no longer work her hands right so Michael had to help her fill out the ballot. She managed to mutter "Mama Obama" or at least that is what they think she said. Beth and Michael are certain it is what she meant. Once completed Michael headed to the mail box while Beth stayed by her Mother's side until exhaustion overcame them both.

Elizabeth Libba Grant died on Monday morning the 13th of October. This is what Beth wrote about it. " As she was passing away of course I said "I love you", but then I unexpectedly blurted out "You did a good job" It is sad and I am sure it has not sunk in yet, but, I am just so proud of her."

I think that says it all Beth, excepting one more thing and this I know is what Libba would say ..... VOTE. It is your turn. 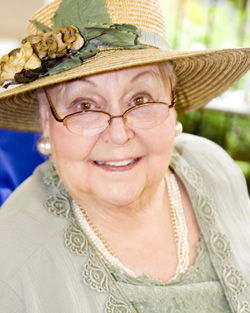