At the recent Dad 2.0 Summit, a conference for dad bloggers, one of the organizers, Doug French, touched upon this in his opening remarks. "Even when it's no longer about changing diapers," he said, "it's about changing life's metaphorical diapers. You never stop being a dad." I love that idea, metaphorical diapers. Once you become a dad, the diapers may change but you're a dad for good.

But what's the actual moment when a father becomes a dad? 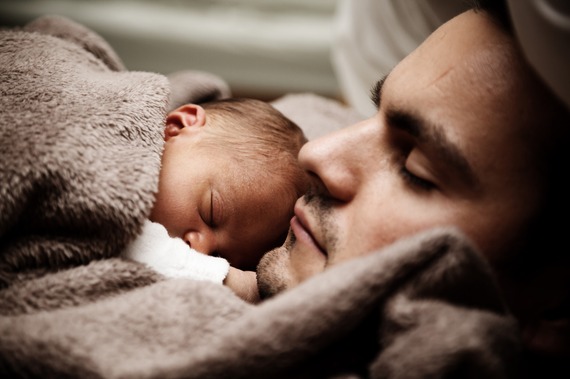 For me, that moment occurred the day each of my sons was born, in 1996 and 2000. But it wasn't their births that made me a dad. It was what happened in the minutes after.

When my wife and I were pregnant the first time (we're divorced now but remain best friends), I read somewhere that we should maybe talk to our child before delivery day. So in the last few weeks of the pregnancy, in the evenings, I would hunker down near Ellen's belly and talk. Though one-sided, it was a conversation. We talked about how Ellen and I had spent the weekend, or about how we were getting the house ready, or about what was going on in our lives at that moment, or how much "We're looking forward to meeting you!"

As I was preparing this article, I wondered if this was a thing, talking to kids before birth. A little research turned up "Babies Listen and Learn While in the Womb," published on WebMD in January 2013. Writer Denise Mann reported that babies begin to absorb language when they're inside the womb during the last 10 weeks of pregnancy.

This made sense to me. After all, when I was talking to my kids in utero, there was only a quarter of an inch of skin and muscle between us. Though not a single word was understood, what I wanted was the sound to get through, the brightness, the positive intonation of my voice. The hopefulness.

Further digging uncovered "Babies Learn to Recognize Words in the Womb," published on sciencemag.org in August 2013. Beth Skwarecki wrote that babies can indeed hear sounds from the outside world and retain memories of them after birth. She said, as I'd hoped, that sound carries through the mother's abdomen.

"If you put your hand over your mouth and speak, that's very similar to the situation the fetus is in," cognitive neuroscientist Eino Partanen of the University of Helsinki said in the article. "You can hear the rhythm of speech, rhythm of music, and so on."

Twenty years after my conversations with Jeremy and Ian, that sounded like validation. Going on instinct fueled by my desire to be a father (and a dad), I'd sort of struck up a conversation with my kids through Ellen's abdomen. A few times Ellen and I even held up headphones and played some music. The Broadway cast of Les Miserables, if memory serves.

In late March of 1996, our son Jeremy was born. As delivery day approached, I asked Ellen if I could record the whole thing on video, but she asked me not to. I understood, but I did secretly record the sounds of his birth, starting just a few seconds before he emerged. I was able to capture his first screams. That cassette is invaluable today, among the most precious things Ellen and I own.

After Jeremy's delivery, I went with him into the recovery room. Blood was drawn. Footprints were taken. The boy wailed and wailed, and who could blame him? I didn't know what to do--there's no training. I was a brand new father with not one clue how to comfort my son. Instinctively, I leaned down and simply started talking to Jeremy, using his brand new name and giving his brand new ears a chance to hear his brand new father's voice.

And then something happened.

Jeremy simply stopped crying. He turned to me. At least that's what he did in my memory; probably he just stopped crying and seemed to pay attention. What was obvious, though, was that he knew my voice. He recognized me. The sound of my voice was familiar as well as familial.

Four years later, in 2000, our second son, Ian, was born. Ellen and I did it all again. Talking, music, even the sound recording when he was delivered. And in the recovery room, I spoke to Ian and he heard me--and his father became his dad.

Long ago, a friend told me that during my wedding reception I should pull Ellen to the side and just spend a few minutes watching our guests have a good time. Those would be our longest-lasting memories of a whirlwind event. It was good advice.

In the same vein, I tell all the men I know who are expecting kids to do what I did. Talk to your kids before they're born, then talk to them in the minutes after. They'll know the sound of your voice. They'll know you. They'll bond with you. And you'll create your indelible--and incredible--first moments as dad.