The Hypocrisy of Democracy or When the Glue Comes Undone

As an artist, satirist and activist, I am very fortunate that I live in America. My freedom is never taken for granted and I cherish my rights to criticize the misuse of power. I'm well aware of what happens to people who live in other countries where there is no tolerance for dissent. Not that this is a perfect country... If it were, I would be out of a career!

I read an article by Andrew Sullivan called "Democracies end when they are too democratic", published May 1, 2016, in New York Magazine and I think it's worth sharing. The messages are vital to our democracy. 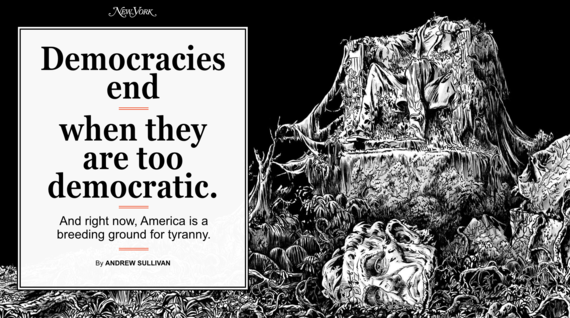 This article led me to want to share a short story I like to tell every time there's an election. This was told to me by Lew Jain, an old cowboy who lived in Northern Idaho. I met him in 1965, when I spent a summer painting landscapes near Lake Coeur d’Alene.

Once upon a time, a very long time ago -- way before people existed -- the world was populated only by dogs. It was very difficult being a dog, because all they did was fight amongst themselves. Consequently, there were homeless dogs; hungry dogs; sick, suffering and dying dogs. Big dogs picked on little dogs. Little dogs picked on littler dogs. It was, in essence, a dog-eat-dog world.

So, after what seemed like an eternity of turmoil, the dogs gradually realized they better do something to change their world. They decided to have a Bow Wow and put an end to their problems by electing a leader. One dog barked, "I think we should elect for our leader the French Poodle, the smartest dog!" A French Poodle seconded the motion, but another dog yipped, "Wait! Just because the French Poodle is a smart dog, he's not a tough dog. He's not as tough as the Doberman or the Pit Bull or the German Shepherd. I say we should elect the German Shepherd as our leader." "Woof woof," barked a German Shepherd, seconding the motion. "Grrrrr," said another dog. "Just because the German Shepherd is a tough dog, he's not as fast as the Whippet or the Saluki or the Greyhound. I say we should elect the Greyhound, the fastest dog, as our leader." "Bow wow!" said a Greyhound seconding the motion.

"You gotta be kidding me," howled another dog, "Just because the Greyhound is the fastest dog, he can't pull the sled like the Huskey." "Wait," said another dog, "He can't swim like the Labrador, he can't smell like the Bloodhound, or do tricks like the Border Collie." And the vicious fighting started all over again.

It seemed none of them could ever agree about who should be their leader. Finally, one little mutt, with a long wet nose, floppy ears and a bushy tail said, "Wait! I know who should be our leader!" All the dogs stopped their fighting, raised their ears and wagged their tails, looking at him as he proclaimed, "We should elect the dog whose asshole smells the sweetest!"

All the dogs barked in agreement and began sniffing each other's butts, looking for their leader. This tradition continues to this day, which is why dogs sniff butts. They're still looking for the asshole that smells the sweetest. And this explains how I've always felt about politics.

Photo credit: Carrie Boretz for the New York Times from "The Big City: Falling For It", an article by John Tierney about my Dog Meat Soup hoax in 1994.