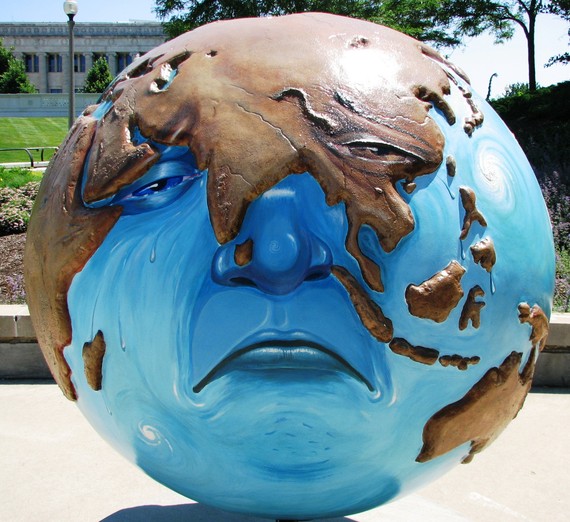 "We've hit the limits of a finite Earth!" Ever heard this environmentalists' call to action?

If you have, it's probably made intuitive sense. After all, aren't ecosystems in collapse everywhere? The message warns us that we've crossed the line, and the obvious takeaway: Pull back just as fast as we can.

Not only is the message common, it is passionately felt. Barely off the podium after delivering the opening address at a conference of campus sustainability leaders, I was hit by a blast of anger. I'd outraged a professor of ecology by questioning the usefulness -- even the accuracy -- of this oft-heard battle cry.

He didn't buy my critique, and I winced and wriggled as I tried, and failed, to explain. So I'm using this venue to clarify what I wish the professor had heard.

"Hit the limits" is a lousy construct of our crisis for a bunch of reasons.

First, most people hear "hit the limits" and understandably assume it means that we've hit the limits of nature to meet human needs, period. Persistent messages of food and water scarcity and "overpopulation" seem to tell us just that. "Scarcity is the new norm," wrote Lester Brown a few years ago.

And from there, a lot of us might well conclude that, having hit the limits of nature's capacity to provide for us, we must do one better than nature. Yes! We must quickly go beyond nature with genetically engineered seeds and geo-engineering of the climate. We must make whatever intervention is necessary to extend Earth's limits.

Is that the response sought by those using the slogan? I don't think so.

Second, "hitting the limits" is bound to heighten fear. It's hard to imagine solutions to absolute scarcities, and all of them seem to involve painful cutbacks reducing the quality of our lives. Yet, psychologists tell us that fear, especially of our own mortality, typically makes people more materialistic and self-centered. Not exactly the desired response, either.

But there's a deeper drawback to the message of quantitative overreach: It doesn't accurately define the problem, and thus leads us away from real answers.

Is it the result of hitting nature's quantitative limits? Not when a third of all food is literally wasted and we waste vast food potential by devoting three-fourths of all agricultural land to animal food production that supplies only 16 percent of our calories. In fact, of all the calories livestock consume, humans get only 3 percent in the animal flesh we eat.

Or consider energy: In the U.S., it's estimated that from 55 to 87 percent is wasted. And nature's potential supply? The sun brings us 15,000 times the daily dose of energy -- mostly untapped -- relative to what we currently consume in fossil fuels.

And beyond waste, just one example of destruction: Every year unsustainable farming practices result in a loss of topsoil equal to seven pick-up trucks' full of topsoil for each person on earth each year; yet it takes 200 years, at least, to generate one inch of this resource essential to our survival.

Diagnosing the problem as quantitative overreach doesn't lead us to think systemically, which is the only way we'll get to the root of our crises. We're not encouraged to see that, for example, we could cut the plastic garbage in the oceans by half and we'd still have a plastic soup the size of Texas. We could cut by half the rate of depletion of the Ogallala Aquifer and still be running out of groundwater in major areas of the farm belt in a few decades. Cutbacks alone can't succeed.

As a slogan, "Hitting the limits of the Earth" can be heard as blaming the skimpiness of nature, or blaming greedy, over-consuming humans, when most of us are experiencing real lack: One in four children is stunted by malnutrition.

Instead, we can learn to think systemically. Doing so, we see that, yes indeed, we have crossed a limit. It is this: We've exceeded the destruction of nature that humanity can wreak without causing horrific, irreparable loss and suffering. We've disrupted nature's regenerative powers. We need new metaphors that ignite our curiosity about the underlying human-made economic and political systems that cause this waste and destruction of nature; as well as make what we do produce unavailable to those who most need it.

We need messages that point to underlying, failing systems, not mere quantities. We need messages suggesting that life will be much better -- not bleaker -- as we learn to align with nature's laws and our own commonsense.

We can break free of the fear-inducing message of scarcity. We can take a deep breath, use our common sense, and find the courage to recreate democratic, fair economies in which we produce food and energy for all in ways that regenerate nature's richness.

I sure hope my antagonist reads this.