Last Tuesday, Arizona joined Colorado, Maine and Washington by qualifying an initiative to raise the minimum wage for the November ballot. Now, 12.3 million voters in four states will have the opportunity to ensure that hard work pays for more than two million workers. 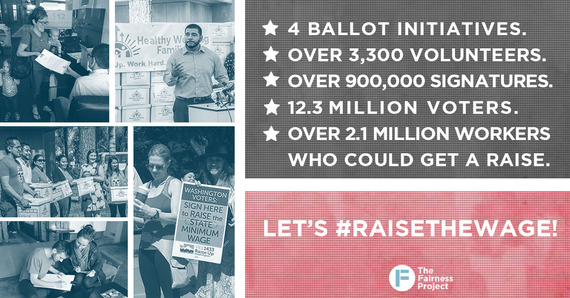 As if to emphasize the importance of these ballot initiatives, earlier that same day, New Jersey Governor Chris Christie demonstrated how elected officials have failed to tackle the issue of economic inequality when he vetoed legislation that would have gradually raised the state's minimum wage over five years. With a simple signature, nearly a million workers were denied fair pay for a hard day's work.

These two events highlight the disconnect between politicians and their constituents. As tens of millions of people struggle to get by on a minimum wage from a different era, Congress and state legislatures tie themselves in knots, unable to give the people what they clearly need.

Take Corletta, a volunteer with our partners at Colorado Families for a Fair Wage. For more than two decades she has worked at a nursing facility, juggling her duties caring for elderly patients and raising her four children. Over two thousand miles away, Tabatha volunteers what little time she has with Mainers for Fair Wages in between her duties as a mother of two and as a cashier working unpredictable hours at a convenience store.

These women don't know each other, but they both understand the importance of hard work and the toll that financial instability takes on people, their loved ones and their communities. At home, Corletta and Tabatha hold their families together even though making ends meet is a struggle each month, often forcing them to decide between putting enough food on the table and paying rent. Saving up and hoping for upward mobility isn't even a consideration. These are just two of the 3,300 volunteers who are taking the time to make change despite their busy lives.

In 2014, four states passed ballot initiatives to enact small increases in the minimum wage. It was a great start. But this year's election is already blowing 2014 out of the water. The 2016 campaigns will impact five times as many workers, putting money in workers' pockets that they will spend to help boost the local economy and build thriving communities. Two of these campaigns go a step further and ensure workers have access to paid sick leave, so that parents can take care of sick children. And that doesn't even take into account recent victories in California and Washington D.C., where elected officials enacted $15 minimum wages in response to ballot initiatives that were clearly going to pass at the ballot box.

The scale of impact from these ballot initiatives is unprecedented and sets the stage for a longer-term strategy to use direct democracy to create real change for working families, whether politicians want to lead on the issues or not. Embracing ballot initiatives as a tool for change can also help lift up the voice and build the political power of women and communities of color, who are underrepresented in state legislatures but overrepresented in low-wage jobs. Women make up two thirds of all minimum wage workers, but less than a quarter of state legislators. With ballot initiatives, everyone has the opportunity to make their voice heard.

Historically, it's been tough to get low-wage workers out to the polls. But in 2016, these ballot initiatives will inspire low-wage workers by giving them something immediately tangible to vote for. Rather than sitting out this election, workers earning low wages and their friends, families, and entire communities will have a very personal reason to vote in November.

This election cycle has been a wild ride already, in large part because voters in America are disillusioned. Americans have lost faith in the political process and no longer trust that elected officials will pass laws that work for them. But in this election, people like Corletta and Tabatha are showing us a new path to change, state-level action that gives millions of people the ability to make the changes to our economy that they need and deserve.