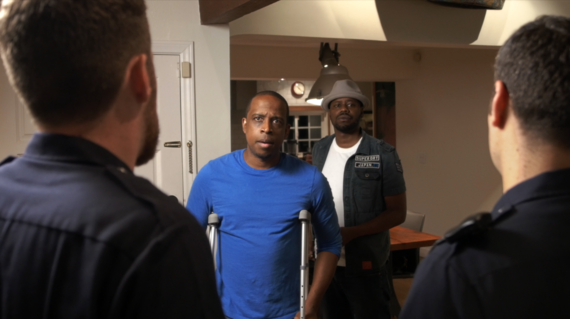 Last Memorial Day, my wife and I threw a party at our house. It went into the night. When that happens, Jill has a penchant for plugging in a microphone and creating an impromptu karaoke party in our back yard. It's great fun for everyone! Except for me. I am not, shall we say, karaoke inclined.

At about 10pm the police were called because the music was too loud. However, when I immediately promised to turn it down, the officer wasn't satisfied. With his hand placed firmly on his holstered gun, he proceeded to lecture me about how privileged I should feel to live in a nice neighborhood, and how I should be thankful that my neighbors allowed me to live in my house.

Admittedly, it was a rather mild interaction with the LAPD. But the fact that this man felt he had a right to judge me within a few minutes of our meeting, and saw my party as some sort of threat to himself and a community I should somehow feel privileged to be a part of, seemed to point to a larger problem of institutionalized bias.

This was, by far, not my first negative encounter with law enforcement. In fact, it has been a running theme throughout my life - I've been unjustly searched for drugs so many times, it's become comical. Some encounters have escalated to assault (yes, I've been assaulted, no this blog is not the place to talk about it). Some have not. I used to be angry about it but I am no longer. I'm just sad. And afraid. Very very afraid.

Certainly, it's important to note that I have had many interactions with police officers that have gone quite pleasantly. They are still the people I call when a random person attempts to defecate on my front lawn (true story) or when someone decides to steal my car for a Ferris-Bueller-type joyride (not a true story, but I could see it happening). So trust me when I say that I don't see police officers as the enemy.

And let me also be clear: I am not a victim. I don't feel that the world owes me anything, and I know that I need to work hard and play nice in order to have a happy life.

But with all that said, why do I - along with so many others like me - still get harassed by some police officers for no justifiable reason?

I've come to accept this bias as a reality of the world I live in. (I'm talking about a statistically proven bias within a large system with factual historical justifications, not just anecdotal stories about how someone was mean to me.) Yes, it sucks, but it happens. But what discourages me, what makes me continue to fear for my life with every interaction, is how so many people refuse to even acknowledge that the bias exists in the first place.

Every time I've told stories of harassment by the police to some of my "All Lives Matter" friends, I encounter the same level of defensiveness: I'm seen as being overly sensitive or too hostile. I'm either "grossly exaggerating" or not recognizing that "this happens to everybody."

Sometimes, I receive a virulent defense of the police:
It was an isolated incident.
The statistics favor this happening a lot less than I see.
I'm ignoring all of the GOOD interactions with police.
I must have been acting in a way that justified this treatment.

And occasionally, the trump card is pulled: "I'm tired of police officers being vilified by the media. Thugs are thugs and they deserve what they get." Essentially, a defense that is not a defense but rather a condescending judgment steeped in coded language.

But all of those reasons do not erase the countless times I and others like me have been physically and emotionally assaulted by some of those sworn to protect us. And explaining it all away serves only to distract from a real conversation that needs to be had about how we can stop these incidents from ever happening again.

Because you can't fix a flat tire by talking about how great the engine is.

Or saying that everyone gets a flat tire.
Or saying "if you drove better, you wouldn't get a flat tire."
Or "Considering the amount you drive, that's not a lot of flat tires."

The tire is flat. It needs to be fixed.

And to anyone who says the tire is not flat; anyone who contends there is no real issue, I say this: You are the problem.

Seriously. You ARE the problem. Try to dispute it all you want, but that only proves that you are the problem.

And hey. I will still be nice to you. You can even come over and sing "Black Velvet" the next time Jill starts up with the karaoke. But when it comes to this particular argument, if your only argument is that there need not be an argument, well then you're just wrong.

Because you do not have the right to deny me my own personal experience just because you haven't experienced it yourself. The world is complex and multifaceted and you do not get to simplify it out of convenience.

What does it hurt to try to see things through someone else's perspective? What harm can it do? Why would it be so difficult to deny that my truth is true for me (and a GREAT DEAL of others) and that something should be done about it?

I understand that not all police officers are bad people. So why is it so hard to admit that some are and that those people very often inflict their prejudice, viciousness and hostility on large groups of people -- often minorities -- over and over and over again? Just because it hasn't happened to you doesn't mean it doesn't happen. And if it happens AT ALL, It. Must. Be. Fixed.

Now, there are many ways to go about fixing the problem, but as we've all learned from Intervention, you can't fix a problem until you acknowledge it. In this case, acknowledgment starts with those who are oppressed being heard. Loud and clear. Without distraction.

Lets not further silence voices that have already been silenced. Let's listen without prejudice. Let's start a dialogue of empathy.

....Today, I released two new episodes of my web comedy series Keith Broke His Leg. One of them is about the very interaction I had with police over Memorial Day (with comedic license taken); the other is an episode about my ridiculous encounter with a psychic. In both, I make a pretty big fool of myself. What do you say we all take a moment to laugh about this before we get serious about it: