It has been four weeks since episode "Thirteen" of CW's The 100 aired. A lot can be done in four weeks. It takes about that time for the Moon to orbit around the Earth. It took me just as long to sign up for and then cancel my gym membership. But, as it turns out, four weeks are not nearly enough to fully grasp the astonishing fallout of what happened to be the last episode of The 100 many fans will ever watch.

In what follows, I do my best to capture a fragment of what is undoubtedly one of the most interesting cases of fan backlash in recent history.

To recap. Right on heels of her sleeping with Clarke (Eliza Taylor) -- a moment beautifully built up to by The 100 writers -- Lexa (Alycia Debnam-Carey) was killed by a stray bullet consequently securing the show's place in the long history of adverse treatment of LGBT characters on television. In any case, following the removal of A.L.I.E. 2 chip from the back of her neck -- plot twist I nearly missed because I was too busy shaking my head in disbelief -- Lexa's body was carried away by her second-in-command Titus (Neil Sandilands), presumably never to be seen again. Or, as The 100's writer Kim Shumway later explained, at least not in "her living, breathing form."

The thing is, fans knew even before "Thirteen" had aired that Lexa appears in the season finale. Jason Rothenberg, The 100's showrunner, took to twitter to invite them to watch the filming and "say hi" on set. Subsequent photos, videos, and reports of Clarke and Lexa together and very much alive were in fact the pinnacle of a 10-month long marketing crusade devised by Mr. Rothenberg and his staff to court and engage the most active of fans in a way that led them to believe that their beloved character -- for many a source of hope and inspiration -- was safe and sound in the big finale.

Having seen "Thirteen," however, those who turned The 100 into a cult show with a rising profile are now reluctant to stick around and find out if Lexa makes her return as a hologram, friendly ghost, or her identical twin sister Rexa. Feeling disillusioned, duped, and betrayed, fans who once took solace within a progressive and label-free world of The 100 increasingly sought comfort within a different world that emerged entirely out of collective imaginings -- one that permeated various aspects of fannish life, from blogging, to writing fanfic and vidding, to simply hanging out on twitter and tumblr. 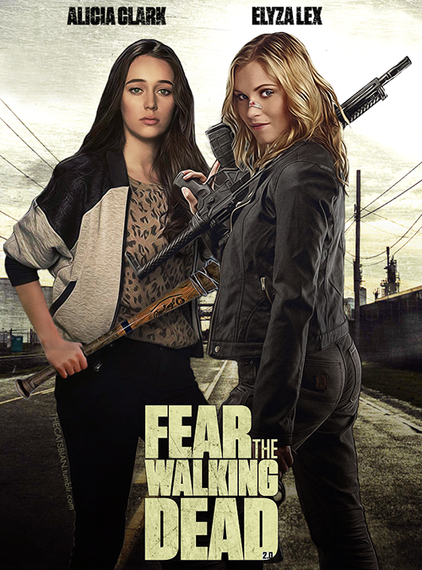 Against the backdrop of widespread agreement to respond to Lexa's death by swearing fealty to AMC's Fear the Walking Dead -- a show that features a character called Alicia Clark played by Alycia Debnam-Carey -- fans started to imagine what would happen if Eliza Taylor who plays Clarke on The 100 was to portray a character on the other show. With the name comprised of a modified spelling of her own first name and the name of her love interest's character on The 100, Elyza Lex soon materialised as part of "Lexark" -- arguably one of tumblr's favourite 'ships. She also trended worldwide and, in a somewhat ironic twist, even Javier Grillo-Marxuach -- the man who penned "Thirteen" -- knew who she was.

It is not just this mass appeal that makes Elyza Lex relevant. In reality, she exposes a whole new form of collective coping -- one that not only tries to best remedy the loss of a beloved television character but also, more importantly, draws from the fandom's capacity to produce counter-narratives which circulate freely through digital media platforms. This new form of coping thus extends the meaning of fandom beyond what Henry Jenkins described as "hunting and gathering" in his 2006 book Convergence Culture. If ten years ago, fans chased down bits of the story across media, compared notes with each other via online discussion groups, and collaborated to ensure that everyone who "invests time and effort will come away with a richer entertainment experience," the virtual making of Elyza Lex revealed that today they are capable of so much more. They are mobile meaning-makers who appropriate media structures, strategies, and symbols for their own goals and desires. Valentina -- of the catsbian tumblr fame -- notes, "[Creating Elyza Lex] was truly a therapeutic experience, taking all the sadness and disappointment over Lexa's death and channeling it into a positive new story that still felt so familiar. It's the first time I see a fandom push back in such a way and I'm still in awe." This new bread of an empowered fan also raises money for charity and creates information websites.

What we are witnessing in fact is an exciting power-shift that challenges a more controlled, one-way flow of information -- a shift that should not be taken for granted, especially not by television networks that increasingly base their marketing schemes on social media engagement and word-of-mouth promotion. Today's fans, however, will not promote a show they feel has used them and then let them down. In light of massive backlash that occurred since "Thirteen" aired four weeks ago, The 100 emerges as a cautionary tale.