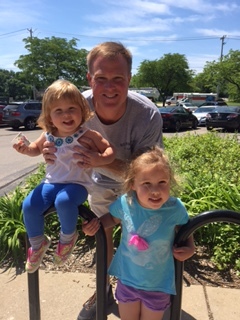 With my father and father-in-law having been taken far too early, Father's Day in our house is about my husband. Normally when I've completed the typical Father's Day preparations on behalf of my young girls--bought presents, planned special dinner, made (okay, bought) cake--I feel a sense of accomplishment and excitement. But this year, it didn't happen. The actions felt so hollow, so inadequate.

How do you celebrate a man who has just uprooted his life for his wife and committed his talents to being a stay-at-home dad while his girls are growing up? It's not the type of gratitude you can convey through a "#1 Dad" card or mug.

One year ago, my husband, John, told me he would support my career by selling his longtime family business and moving our one- and four-year-old daughters across the country for my new job opportunity. "It's your turn," he said, "It makes sense for our family."

Maybe it made sense when you put it on paper, but there was a lot behind that decision. For him, that decision was full of courage and "we," and it was completely absent of ego and "me."

To witness the transformation of how our girls depend on and interact with my husband has been amazing. They've always loved him, but he is now their absolute rock. Whether they have a new dress or a new boo-boo, they run to show daddy. When they need a hug or horseplay, they turn to daddy. He is their teacher, doctor and playmate, and they adore him.

When I told some of my friends about our new arrangement, I received a lot of skepticism and cautionary tales. "He doesn't know what he's gotten into," they told me. "Do you think he can do it?" Another friend warned: "He'll keep the kids, but that'll be it. Be prepared that the house will be a mess when you come home."

So maybe all the lights in the house are on when I get home sometimes, and the girls may have peanut butter or gum (or both) in their hair, but he has absolutely nailed it. He is the fixture at preschool and the dad at story hour. He is the cook and the cuddler. He keeps the house running and the girls happy and healthy. He keeps me sane.

I couldn't be doing what I am professionally without his support. In a world where there is a lot of lip service given to equal rights and opportunities, my husband is making it a reality. He's not the type to scream it from a soapbox, but instead he is quietly and humbly defining what it means to be a true partner.

I'm so appreciative for what he's doing, but I admit I envy his success sometimes. I became accustomed to being the parent the girls ran to for everything and for being the one who could quiet their loudest cries. Now it's normal for the girls to reach for their daddy when they're in my arms and to run to him first.

This made me sad at first and even a bit angry--I gave birth to them and nursed them, didn't I?? But I realized I needed to put my ego aside as my husband has done and be happy for him. So on this Father's Day, that's what I'm doing. I'm going to embrace how they embrace him and thank him for being amazing.

And how is my husband feeling? He misses the mountains. He misses the adrenaline of work. He even misses the dirt from his job sites. But he never misses a moment to show his daughters that every day is Father's Day.