I cut my 3-year-old daughter's hair really short. She had asked me, specifically, "Can you cut my hair like a boy? Really, really short?" At first I gave her a bob. Then a shorter bob. Then finally, when she asked yet another time, I said to myself, "Why am I avoiding this? Let's do it." I got out the clippers.

Why did it take her asking me three times for me to take action? Because this culture is still very binary when it comes to gender, and never more so than during early childhood. And I'm not immune to my culture, and I feared the reactions of others. 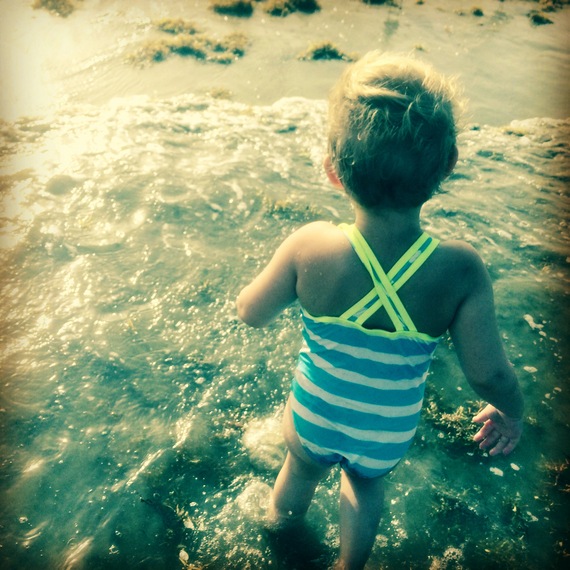 When I was in the fifth month of my pregnancy with my first child, everyone wanted to know the sex. "Boy or girl?" When I said, "Surprise," they were openly horrified. "No one is going to know what to get the baby!" Pink or blue? Cupcakes or puppy dogs? Butterflies or tractors? These conversations annoyed me. I have a foot in my spleen and no bladder capacity and you want to know pink or blue?

Even without the key information of my baby's sex, people sounded off on how different boys and girls are. Boys are so bold, so daring. Girls are so sweet, such good listeners. Many of these people were college educated, where they ostensibly took one class which addressed binary gender constructs. One lesbian mother described her son as "all boy." What does that even mean? I don't hold gay people to a higher standard when it comes to questioning gender roles, but it is testimony of how deep these perceptions of girls and boys run in this culture.

Where does the assertion come from that girls and boys behave certain ways, and that this is inherent? They are socialized differently and may have different ways of relating to one another, especially as they get older and these expectations become even more rigid. But are these differences as stark as many parents say they are? Indeed, many of the parents who stated that boys and girls were "so different" were basing this assumption on their uncontrolled experiment of (their own) two children.

Yet gender stereotypes are encouraged in early childhood, especially when it comes to toys. With that in mind, during my pregnancy, I vowed I would empower our girls, and make sure our boys were sensitive. As it turned out, we had two girls. When my youngest daughter was born, I joked to my husband, "Well, who knows? Jury's still out on gender until they tell us themselves."

I didn't leave her gender "open" as some parents have done, such as the Canadian family who would not share their child's gender with the world, although I did admire that attitude and effort. I did try to make room for an alternative sexual orientation. For the first three years of my older daughter's life, I was careful to say, "Shea, when you get a boyfriend or girlfriend..." until she finally corrected me, at 4-years-old. She said, "Mom, I'm going to marry a boy, so you can stop saying that. I don't want to marry a girl." Fair enough.

When my youngest child started pointing at little boys in picture books, saying, "That's me," I was surprised. At first, we corrected her. "You're a girl, but you can pretend to be this boy if you want to." Then, after discussing it, we decided to take it at face value. We stopped correcting her. Yet I didn't change pronouns or toss out dresses and pink shorts and other articles of clothing which were passed down from my older child.

If anyone was equipped to deal with a transgender child, it was us. When the time was right, we would change pronouns. We'd let him start hormone therapy as soon as he was ready. We would refinance the house to pay for top surgery. We would do almost anything to ensure that the transition was smooth.

When I cut Phoebe's hair, I used clippers, using a YouTube tutorial as a guide. I left some length on top, skater boi style. The difference was pretty striking. She really did look like a boy. After the haircut, I noticed that I felt some loss around my perception of my child as female. I felt fear about how my child might be treated. My child attends a Montessori school filled with people who are like-minded in terms of empathy and rejecting cultural stereotypes, but kindergarten at a public school is only two years away. And what then?

That said, her hair looked adorable. The very next day, she wore her favorite sundress. After a few days, Shea pointed out that her sister's old pictures didn't look like her anymore. "Phoebe looks weird in pictures with long hair now," she said. "I like her short hair better." More importantly, so did Phoebe. She reveled in the fact that she no longer needed the tangles brushed out of her hair.

Strangers made comments like, "So why the short hair? Did her sister cut it?" They would give me a knowing look, as if to say, "I've been there!" Or this gem: "Did she have lice?" I shrugged and said, "She wanted it. And we all love it." One stranger at the swimming pool asked why my son was wearing a girl's swimsuit. I can understand people being curious, but the questions point to one thing -- if your child deviates from gender norms, be ready to explain why.

The other day, when we were driving, Phoebe revealed that she didn't want to wear "girls" clothes anymore. I asked her: "Tell me about the clothes you like. What kind of shirt do you want to wear?"

"Blue. Black. With cars on it or dinosaurs or sharks."

"So you want a shirt with cars or dinosaurs on it. Maybe even a shark!"

We went to the thrift store that week. The boys and girls clothes were all on the same rack. She picked out a gray shirt with a red 1965 Mustang on it, and a brown Diego shirt. Some khaki shorts "like Daddy's." She couldn't have been happier.

What would happen if we gave up on the idea that boys and girls are so different? As the director of my child's preschool pointed out, "It can be more effective to highlight our similarities. Instead of putting people into separate corners, it pulls us into one community." She suggested that when Phoebe says she is a boy, we could say: "Yes, and we're all human!" What a radical idea.

And what would it be like if instead of describing our children as "all boy" or "just so girly," we talked about how much our kids love being in charge, how they love to draw, and swim, and have picnics in the park? How they spend hours in the bath, and how much they want to know how things work? How they like being the center of attention or maybe how they take their time to get to know someone? Instead of trotting out the same old stereotypes about what girls and boys are like, we could talk about what our children do; how they move through the world. We could talk about all the ways they are human, and how great it is just to be a part of it.