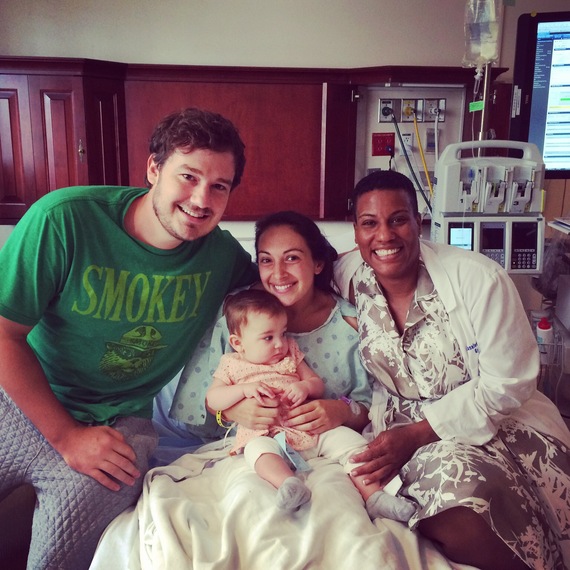 The words echoed off of the hospital walls, closing in on me with each repetition, making me feel like a prisoner in my own body. I wanted to escape this moment, but I was immobile, paralyzed by both modality and circumstance. My world was seemingly crashing before me, and I was powerless to stop it. When I had asked the question, I hadn't expected to receive such a helpless answer; one that would make me feel claustrophobic in my own skin.

"Can you not find the heartbeat?" I had asked, while alternating glances between my obstetrician's furrowed brow and my bloodstained legs.

It was only a day prior that I had been diagnosed with Placenta Previa. The words had rolled off of the technician's tongue in an almost effortless manner, which made me feel oddly comfortable and at ease. Her nonchalant demeanor was evidence, at least to me, of an extensive history with the diagnosis, leading me to believe that it was common and, therefore, of no concern. I'd later learn that yes, she was familiar with the condition, because, unbeknownst to me, I had been sent to a High Risk facility for my anatomy scan. But I was ignorant to this at the time and content to linger in the denial stage of grief.

Not a day later, I found myself surrounded by a sea of red. My husband and I frantically raced to the hospital, blood seeping out of me with each mile driven. We sped up to the Emergency Room entrance, and I ran through the double doors, leaving a trail of crimson footprints in my wake. Quickly wheeled up to Labor and Delivery, I was hooked up to fetal and maternal monitoring machines and joined by my OBGYN, whom we had since woken up with a distressed call. She took her place beside the bed and waited patiently for the nurse to calm me with the reassuring rhythm of a capable heartbeat. I studied her face intently as we waited, searching for signs of concern. And sure enough, there it was. With each passing moment that no heartbeat was heard, her brow furrowed further and further.

"Can you not find the heartbeat?!" I had asked in a panic.

I burst into tears. In that moment, I was sure that we had lost our baby. I had bled so much and it had taken us so long to receive medical care that I was all but certain that this pregnancy had come to an end. Trite as it may be, my mind automatically cycled through memories of the five months prior. The first ultrasound; the first nursery purchase; the first kick and all of the ones to follow. Each one blurred by the tainted circumstances of the day. I couldn't see straight. I couldn't think straight. All I could do was cry.

And then I heard it. Thump, thump, thump, thump. My eyes darted up to those of the nurse, who had since broken out into smile. I let go a breath that I wasn't even aware I had been holding; the weight of the world lifting off of my shoulders with each successive beat. I closed my eyes so as to allow my senses to focus fully on the sound before me, letting each cadence lull me into a place of calm and provide some semblance of respite.

Twenty seven days later, I find myself at home on bed rest, a necessary precaution for the preservation of health for both baby and me. I've had to endure one additional hospital visit since the last, due to a subsequent, albeit smaller bleed. I wake up every morning at 3:00 a.m., per my Maternal Fetal Medicine doctor's instructions, in order to ensure that I am not sleeping in a pool of blood. My legs have begun to atrophy; the curvature of my muscles long since replaced by something that can only be described as jello. And I am of absolutely no use at home, even more so than usual, having always been slightly domestically challenged.

But the greatest challenge thus far has been the transition with my 10 month old daughter. As I am not allowed to lift, I am also not allowed to hold her. As I am not allowed to climb stairs, I am also not allowed to retrieve her after sleep. My husband cooks her meals, changes her diapers, and engages her in the activities that she and I used to enjoy. While she still loves me, I'm sure, I feel as though there's been something lost in translation. The way she used to look at me, she now looks at my husband. The way she used to reach for me in the midst of injury-induced tears, she now reaches for him instead. And I have to admit, I struggle with my new role and place on the totem pole. At times, it's hard not to feel as though I've been replaced, as though my bond with her has been irreparably marred.

But then I remember that it wasn't a month ago that she often preferred me to him. It wasn't a month ago that I was the center of her world; the one she reached for in times of peril and laughed with during moments of joy. So while I know that this time will be difficult for us both, I also know that this time is fleeting and that I will have years of opportunity in order to shift the tide. For now, I am doing the best I can to provide a healthy, stable environment for a little sister that will no doubt bring her immense cheer. Years from now, she will remember none of this, and even if she did, it would fondly be referred to as the time that mommy sacrificed in order to better her world.

As moms, we are often consumed with perfectionism. There are a string of unrealistic expectations placed upon us that not even the healthiest and most mobile of parents can achieve. So for now, I will let go of my quest for excellence and the impossible ideals that follow. For now, I will allow my husband to be the best parent he can be for our first born, as I focus on being the best parent I can be for our youngest.

For now, I will set my sights on the future and, in my present, let good enough be good enough.