I always knew I wanted to be a writer, and so by the time I graduated from college, I was ready to get the show on the road. As I’ve told you before, my overnight success didn’t go as planned, and I spent the next decade trying to get published. While I was sure that what I was experiencing was completely normal, I was surrounded by a downright hellish truth: there were other people, some of whom I knew, who were having no trouble whatsoever. Every morning brought news of yet another 20-something woman with a book deal, sometimes for half a million dollars. I could have used half a million dollars! Were those women as good as I was at looking for pretend real estate on the internet? Were they as funny, as charming, as self-deprecating? They were not! Of course, I had no idea what these women were actually like. All I knew was that I hated them.

Thus began my years of torment. Keep in mind that I wasn’t tormented because anything truly awful was happening to me. Getting lots of rejections wasn’t a walk in the park, but it wasn’t physically painful. No one ever threatened my safety, or that of my family. In fact, the rejection letters almost always contained at least one or two compliments, and the editors always, without exception, wished me well. No, I was angry and jealous because good things were happening to other people. I was sure that I was smarter, prettier, more deserving. I was a harder worker, more prepared for wild success, more television-ready! I wanted to drown the people I knew who had sold their books—I wanted to torture them, slowly. And if once they were published those books actually sold well, I was inconsolable.

It’s an ugly way to feel—unhappy because of someone else’s success—but human beings are often ugly. And I’m willing to bet that you’ve felt the same way. Here are some things that can make you go insane when they happen to people who are not you: Getting a boyfriend. Making out with a girl at party. A great SAT score. Getting into a good college. Having cool parents. Wearing jeans that fit well. Having big boobs. Having small boobs. Coming out of the closet. Editing a super-cool magazine. Landing an internship at Teen Vogue just like Lauren Conrad.

Aren’t you exhausted just thinking about it? It takes so much energy to resent people, especially when they actually haven’t done anything to you. (There is, of course, an endless chasm of righteous resentment and ill-will for people who have purposefully done you wrong, but that’s a whole different essay.) So how do you deal, without building an army of voodoo dolls and/or coming off like a Negative Nelly, one of those sour-faced, miserable people who is always complaining about someone else’s happiness? I have some suggestions.

One way to deal with all the frustration you might be feeling is to take a step back and think about what you’ve got going on. When I was in my early 20s, I may not have had a book deal, but I did have a very nice live-in boyfriend who always cleaned the bathroom. (He still does.) I had my health and a close relationship with my parents. (Still do.) Next time you find yourself beating yourself up over what someone else has, if you absolutely cannot refrain from comparing yourself, you can try thinking something like: X doesn’t have nice and supportive parents, and I do. I’m very lucky that way. Appreciate what you have, and yes, appreciate what you have that someone else doesn’t. This is not a very lofty goal, and it’s still a little bit awful, but it’s a good place to start. Either way, it’s important to remember that this one thing that this other person suddenly has is not the only thing you care about, and it’s not the only thing that matters. Life is complex and varied and that’s what makes it fun.

2. Make a list of all the people you’re jealous of, resent, and feel cranky about.

I’m willing to bet that most of them are your peers—maybe even your friends. You know what’s great about friends? Getting older together. At 32, I have several friends now that I’ve had since high school, some even earlier. I’m sure that I was jealous of each and every one of them at one time or another over the last 20 years. This one lost her virginity before I did, that one got into graduate school before me, this one got a cool job that I’d like to have someday. And that’s OK. We all mature and move at our own pace. Try to keep in mind that you want all of your friends to succeed, because then you’ll look around the room at your birthday party and be so proud of each and every one of them. In somewhat more crass language, having successful friends will also up your chances of being successful, because if you’re supportive of them, they will be supportive of you. It’s not dog-eat-dog—it’s a team effort in the end. So be a team player! No one wants to help the friend who was a sulky jerk when you won Smartest Girl of the Year Award. Generosity begets generosity.

3. Treat your body like a part of you, which it is.

Another thing that really helped me with all this was doing yoga. Like many of you, I have always lived in my brain, with my body as a somewhat unwilling hostage. I remember learning about the 17th-century French philosopher Descartes in the 10th grade—he’s the one who said that the mind and the body were separate entities, even if they could influence one another, to badly paraphrase an entire philosophy—and thinking, What is the big deal? Why is everyone acting like it’s so weird to have a mind/body split? That’s how it is! Except, of course, it’s not as simple as I thought. Our bodies are very much connected to our brains and our feelings. When you’re miserable and envious and just want to punch someone in the face, it can be really helpful to move your body. The 12- to 24-year-old me would laugh at this advice, but guess what? That’s when I was the most unhappy in my life. Whether it’s running or yoga or playing sports with your friends, moving your body vastly improves your mental outlook. Personally, I like yoga because I found a great teacher who always talks a little bit at the beginning of class (these are called “Dharma talks”) about how what we were doing on the mat related to life off the mat. By forcing me to slow down, and breathe, and actually deal with my body as a part of me, yoga helped me learn how to let go of things I couldn’t control, and to not get too attached to anything. In my secret fantasies, this means I understand Buddhism.

When all else fails, and you’re consumed with anger and jealousy and all sorts of sticky, ugly feelings, do the silent scream. Scrunch up your face as tight as you can, and then let out the biggest, meanest scream—silently. (Note: I prefer the silent scream because I grew up in a very quiet household and yelling makes me nervous, but if you like to make noise, then by all means, this can be an out-loud scream.) I know it sounds dorky, but it really does wonders. Sometimes you just have to let yourself have a moment of total rage, even if the rage is ultimately pointless and misguided. You’re not perfect. Neither am I. When someone I know wins a big prize or is on a list that I wanted to be on, I still have a moment of UGH GOD WHY WAS THAT NOT ME?! It’s totally normal and healthy. You are not a robot. Allow yourself to feel jealous and angry and whatever else, but then do what you need to do to let it go, and move on.

Why do I move on? Because I have accepted the truth, which is that someone else’s good fortune does not affect my own. Chances are, there will come a day when you win the prize/get into the elite program/have the hottest date/score an Olympic medal. (OK, maybe not that last one…but maybe!) I am not the center of the world, and neither are you. It’s OK to feel sorry for yourself for not getting something you wanted, especially if you worked really hard to get it, like getting into your first-choice school, or being elected prom queen, or being on the New York Times Best Sellers list. But then you have to move on. You have done everything you can to make those good and golden moments happen, and they will.

The world is out of your hands, no matter how organized and dedicated and deserving you are. Every person you momentarily think has everything? Guess what—they don’t. They have problems you don’t know about, and are jealous of other people (and maybe of you). It takes up too much of your precious, wonderful energy to resent other people. Instead, use that energy to motivate you to work even harder on your next project, whether it’s a new zine or your AP history exam or, yes, your next novel. Because all you can truly control in this life is yourself. Being happy and content in my own skin is what has truly saved me from falling prey to fits of jealousy. Find whatever makes you the happiest and do that, over and over again. Soon enough, golden tickets will rain from the sky, and everyone around you will cheer. Some of them might need to take a little private moment to scream into their pillows, but then, if they are real friends, they will come back and lift you up even higher, because they know that your success has nothing to do with theirs. ♦

When Good Things Happen To Other People: How To Handle Jealousy
10 Study Tips To Make Exam Prep Less Stressful 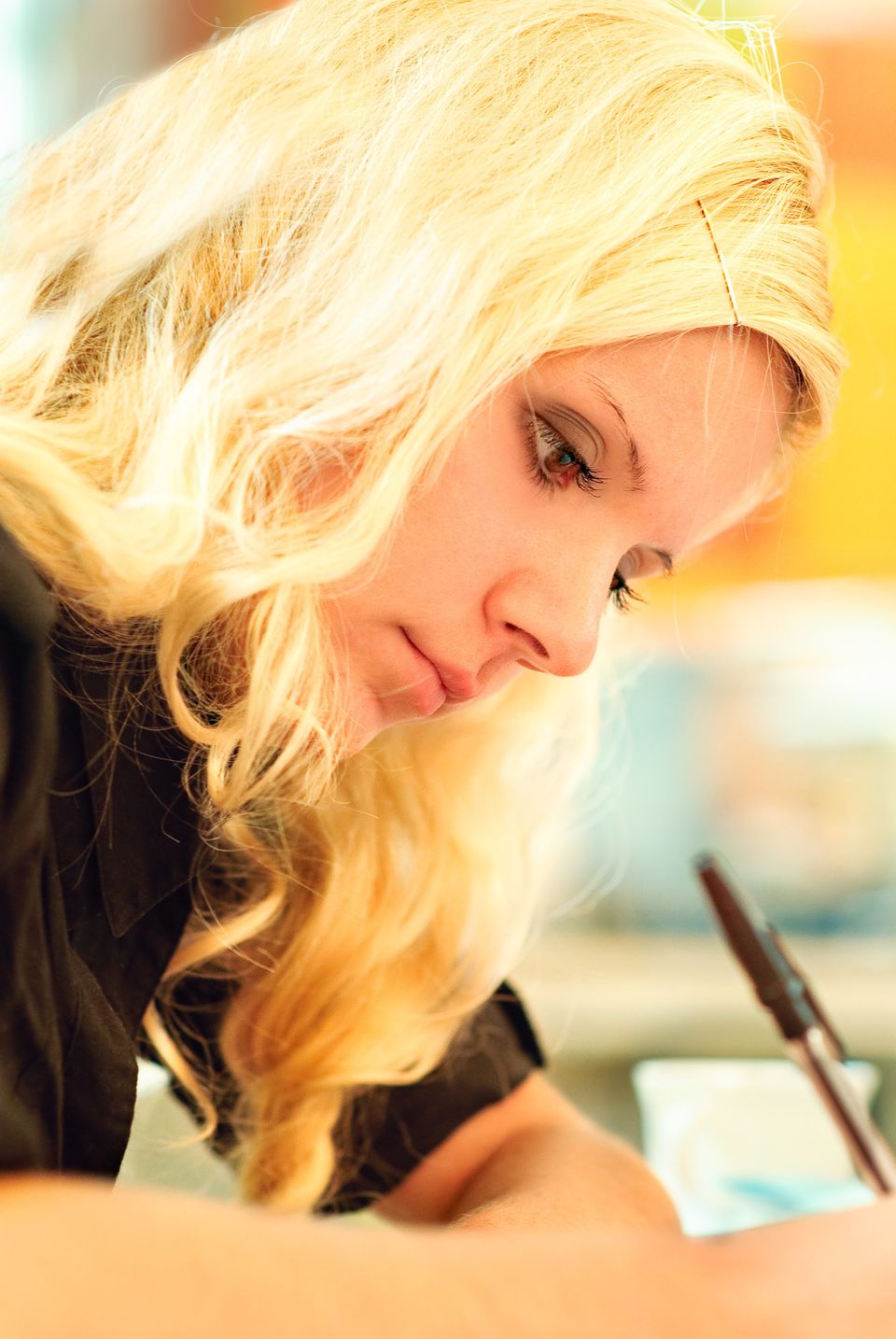 1 / 10
Handwrite It On Paper
Instead of typing out your notes, write them down on paper for better retention. <a href="http://news.medill.northwestern.edu/chicago/news.aspx?id=177291" target="_blank">Research has found</a> that the act of holding a pen and creating shapes on paper sends feedback signals to the brain, leaving a "motor memory" which makes it easier to later recall the information. Typing or digitally recording did not have the same cognitive effect. So although it may take you longer, hand-writing notes could pay off in the long run.
Shutterstock